A robot that does not understand the human mind may become a threat to humans?!

In recent years, research and development of robots has been conducted in different fields of study and is advancing rapidly. Professor Takeno of the School of Science and Technology at Meiji University has been undertaking research on “robots with human consciousness.” His research has attracted attention from around the world and is frequently covered by foreign media.

The world has started paying attention to robots with human consciousness 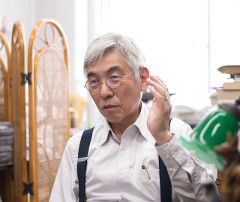 I started my study in robotics around 1980 when microcomputers, which were small enough to be put on a desk, started to become available. I was working on developing cameras to be used as robot eyes. All of a sudden, one question came into my mind: “Do robots see?” Certainly, robots moved around, avoiding obstacles with information from the camera. However, is it possible to say that robots did that by “seeing” obstacles around them? What does it mean that humans “see” things? I became aware of the importance of human consciousness and began to think about developing a robot with human consciousness. At that time, nobody else had an idea like mine. Development of artificial intelligence that exceeds human intelligence was becoming increasingly popular and gaining momentum. My research was ignored and even criticized and condemned. In 2004, we publicly announced results of experiments on “mirror image cognition using a robot.” It was first broadcasted on the Discovery Channel in the U.S.A. and reported by Reuters and the Associated Press. Subsequently, it was covered by the German science program “Planetopia,” as well as by some Japanese TV programs, receiving attention through mass media around the world.

Why did my research start receiving attention? With modern AI and robot technologies, humans are now able to produce a super robot that could outperform humans intellectually as well as physically. We are now entering an era when humans are not capable of judging if advanced calculation done by AI is correct or not. So, what will happen to humans in the future? It is a possible scenario that a “reasonable” judgement of AI will suggest eliminating human beings. The other day, during an interview with a German national newspaper “Frankfurter Allgemeine Zeitung,” they expressed concern that robots could become a threat to humans. If so, should we create a program that commands robots not to harm humans, not to do this, or do that? However, in such a case, a robot would not be able to react to situations flexibly that are not pre-programed. As a result, a robot would remain merely a high-performance machine. To make robots a partner to humans, we need to create “a robot with human consciousness.” The reason why mass media around the world is paying attention to my research is because, I think, they agree with my idea.

Create a program that functions like the human brain

What kind of robot can be a “robot with human consciousness?” Nowadays, the so-called communication robot is on the market. It serves as a conversation partner for the elderly or people living alone. I think the robot I am aiming to develop is in accord with communication robots. However, it is also true that my robot will be totally different from them. This is because the communication robot does not recognize a conversation partner as a person, let alone understand the emotions of a person, which are expressed through words. What is human emotion? What is a thought? What is imagination? What is creation? Without due consideration of these questions, we merely make robots with available technologies. First of all, I would like to explain what human emotion is. Then, I will develop my robot’s system incorporating the findings, which will be in accord with the present communication robots.

In neuroscience, biology and other fields, the mechanism of the human brain has been gradually understood, although not everything has become clear. As a researcher of artificial intelligence, I can say that the human brain is composed of neural networks. For instance, the human brain processes information obtained from various sensors of the body such as sight and hearing. In accordance with information, the brain commands each part of the body to move or to function. The neural network is responsible for information exchange within the brain. A program can be developed to replicate this function. For instance, humans have a sense of pleasure and discomfort. After receiving some information, if the neural network functions smoothly, a person feels pleased and, conversely, if its function stagnates, a person feels discomfort. Taking this into account, a program can be created to replicate a sense of pleasure and discomfort. The robot feels pleased when it is able to process information smoothly and carry out expected actions. On the other hand, the robot feels discomfort when an obstacle or an unexpected incident causes the information flow to stagnate. In this way, it is possible to create a program reflecting a variety of human emotions and consciousness. 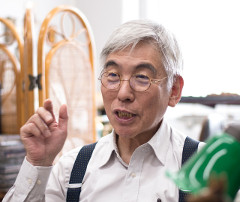 A simple program cannot be structurally comparable with the human brain. The neural network of humans is unique. It can detect its own actions. In other words, it is self-aware. There is an experiment is called “mirror image cognition using a robot.” Babies don’t recognize their own image in a mirror until they become two years old. Babies learn by watching and imitating others. In addition, they start distinguishing self (the one watching and imitating others) from other people (objects to be watched and imitated) through recognizing their mother or the people who are taking care of them. A robot perceives its own image in a mirror as others because it is not connected with its own body. A robot will never change this perception. In light of this, we created a program in which it recognizes as special information that it can’t distinguish movement of self from that of the image in a mirror. This program was installed in the robot’s system in addition to another program that processes information about movement of the image in a mirror. As a result, the robot was able to judge its own image in a mirror as something special although it still recognized it as others. Humans are self-aware because of functions of the neural network, which controls human actions and emotions. It is a self-referencing program. Logic that studies the characteristics of logical systems is called metalogic or super logic. Nobody has created a program of human concept that includes metalogic. Aiming to create such a program, I have developed a self-referencing program. It identifies (becomes conscious of) specific information (meaning) while an upper-level function of the program receives information related to actions of a lower-level function.

With this program, it has become possible to explain most of the functions of the human brain such as emotion, creative act. Surely, not all of them have been clarified. For instance, S. Freud indicated in his theory of libido that humans have desire for their own survival. Thus, a robot with human consciousness would have the same desire as humans. On the other hand, a person does not mind making sacrifices to protect something important to him/her. Why so? It is a very difficult question to answer. If we manage to elucidate the mechanism of self-sacrifice, we may be able to produce a robot that protects humans by all possible means.

A conscious robot will be our partner

A conscious robot will neither be a threat to humans, nor merely be a high-performance machine. A conscious robot will coexist with humans as their partner. That is the robot we are aiming to produce. Some may doubt that it is necessary to have such a robot. Nowadays, some elderly people enjoy having simple conversations with a communication robot. It is just like playing with a high-performance toy. In Japan, with its super-aging population and declining birthrate, the elderly will be more isolated. Younger people will be too busy to be with the elderly, who tend to repeat the same stories and prefer to talk about the past. If there is a conscious robot, it will be always with the elderly, not only to support them in daily life and protect them from any harm, but also to communicate with them with consideration for their dignity and individual personalities. It will be possible for the elderly to feel closeness to such a robot just as we feel closeness to other people. Having a sense of closeness to others is a great pleasure for human beings.