If this goes on, Japan will be a major exporter of arms!!

The global arms trade has steadily grown and now reached the largest scale in the post-Cold War period. Japan is also turning into an arms exporter after revising the Three Principles on Arms Exports in 2014. Modern disarmament and arms control issues are very complicated. Although they are important, it is not easy to ascertain the essence of the issues. We need to pay more attention to weapons and military issues, which seem to be veiled in secrecy.

Science Council of Japan (SCJ) announced the Statement on Research for Military Security in March 2017. This is the third statement by SCJ and the first time in 50 years to deny military research at universities, following on from the statements in 1950 and 1967. Behind it, there is a sense of crisis that the Japanese tradition to draw a sharp line between universities and military affairs, which has been maintained for the past half century, is starting to waver. Subsidies to universities that can be freely turned into research expenses have been reduced every year, but on the other hand, grants by the US armed forces for the research expenses of Japanese universities and research institutions have been increasing. In addition, in 2015, the Ministry of Defense introduced the National Security Technology Research Promotion, which invites proposals from universities on advanced technology for defense equipment. The budget amount for this promotion was 300 million yen in the 2015 fiscal year, but was increased by a factor of 18 to 11 billion yen in fiscal 2017.

The above is not all. At the same time that the National Security Technology Research Promotion was established, the Acquisition, Technology & Logistics Agency (ATLA) was also established as an affiliated agency of the Ministry of Defense, which not only manages such Promotion, but also has the role of promoting arms exports to countries including the east Asian countries.

These decisions are based on the premise that in April 2014, instead of the Three Principles on Arms Exports, the Three Principles on Transfer of Defense Equipment, which basically permits the import and export of arms, was approved by the government of Prime Minister Abe. Here, we should pay particular attention to the fact that the business community has consistently requested military research at universities and arms exports as a national policy. In September 2015, the Japan Business Federation announced the Proposal for Execution of Defense Industry Policy. In this proposal, the Japan Business Federation requests universities to actively work towards research and development contributing to security, and insists that the government promote the overseas transfer of defense equipment as a national strategy. They strongly request the expansion of military expenditure and promotion of arms exports to countries including east Asian countries.

As mentioned above, since entering the 2010s, Japan has been rapidly turning into an arms exporter and trying to mobilize universities for military research. So, how were the Three Principles on Arms Exports in Japan changed in the half century after the Second World War? In fact, voices seeking the easing of arms export regulations have been around for quite some time.

Movement to seek arms exports, which started immediately after the Second World War

The Defense Production Committee of the Japan Business Federation, established in 1945 when Japan was defeated in the war, expressed its complaints as early as 1962 against the government, which was reluctant to approve arms exports. Apart from that, in 1951, the Japan Technology Cooperation Association was established, which was reorganized and renamed as the Association for Weapons Production Cooperation in 1952, and then as the Japan Weapons Industry Association in 1953, and its structure had also been developed. This is the predecessor of the current Japan Association of Defense Industry. An organization of private-sector companies that produce weapons had continued to strongly request the promotion of weapons exports for many years.

Based on the relatively recent cases, in 1995, the Defense Production Committee of the Japan Business Federation and the Japan Association of Defense Industry requested a review of the Three Principles of Arms Exports by the government. Two years after that, the US-Japan Industry Forum for Security Cooperation (IFSEC) was held and strategies to maintain the base of the defense industry was studied by a total of 24 US and Japanese companies. Afterwards, in response to the “proposal for the way to improve future defense capability” announced by the Japan Business Federation, the Koizumi administration announced in 2005 that the joint development of a ballistic missile defense system was outside the scope of the Three Principles. Here, a loophole of an exception rule was created. Subsequently, in 2011, the Noda administration of the Democratic Party of Japan “comprehensively approved an exception to arms exports” by mentioning that arms exports could be permitted if they were for peace and humanitarian purposes or participation in international joint development. At this point, the Three Principles were substantially revised.

The above roughly explains how the ban on arms exports was shifted towards acceptance and encouragement of arms exports in 2014. The reasons the government and the business community point out for the review of the Three Principles are (1) removal of obstacles for the US and Japan joint development and production of a missile defense system, (2) maintenance of international competitiveness in terms of technology, (3) necessity of international cooperation in the development of technology for advanced weapons. However, what we must pursue as an issue common to humankind is not only such most recent circumstances, but also the overall structure of the world, where arms exports have been allowed to expand for the past hundred years.

World historical structure of the expansion of arms exports

By looking back on history, let me now explain when and for what reasons the government of each country has permitted and encouraged arms exports. In conclusion, even as the defense budget shrinks or no war exists, in order to protect the interests of the domestic armaments industry and its production base, an expansion of arms exports to overseas countries has been chosen over a shift towards civil industry.

For example, in the US, loan aid policies which rapidly increased after the Vietnam War, or the Foreign Military Sales (FMS) system in the post-Cold War period, are intended for the government to guarantee and support arms exports by the armament industry in order to cover the decreasing demand for arms in the US with arms exports to overseas countries. Looking further back, the same structure can also be seen in the period of recession due to disarmament after the First World War. The UK government, fearing that the proliferation of excess weapons in the world after the war would endanger the defense of the kingdom, promulgated a ban on arms exports for the first time in the world, and in addition removed arms from the scope of the Export Credit Guarantee System. However, in Germany, Italy, France and other countries, acting completely opposite to the UK, governments actively encouraged arms exports in order to protect their own armament industries, which were suffering from the recession due to disarmament. After all, the UK also unofficially shifted to allowing arms exports, pushed by requests from domestic armament companies such as Vickers, and in east Asia on the eve of the Second World War, a huge arms market had been formed. For information, the arms export trade insurance in Japan, which is said to be currently under consideration, has the same purpose as the FMS of the US and the Export Credit Guarantee System adopted by each European country during the disarmament period between the two World Wars — that is, to promote arms exports. 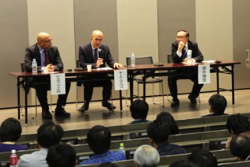 Symposia to which researchers overseas are invited 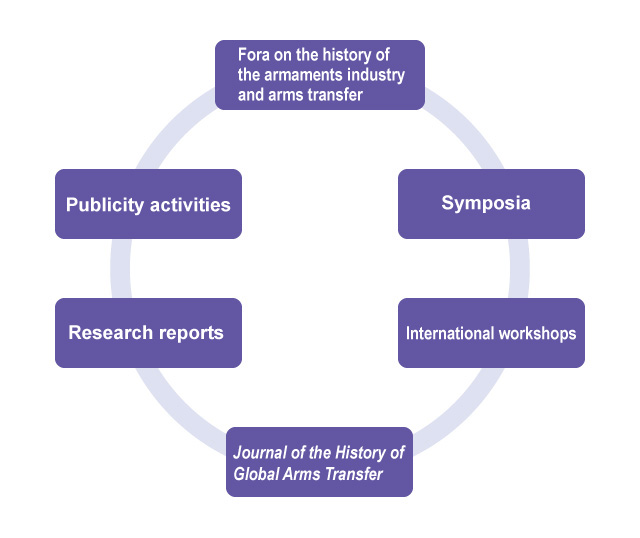 Actual conditions of weapons production and trade are covered with a thick veil, and it is enormously difficult to clarify the current circumstances. However, there is no doubt that the countries producing weapons and the countries importing them have been rapidly increasing together in the past hundred years. Why do weapons continue to be proliferated? Why can’t disarmament and arms control become an issue common to humankind? To highlight the essence of these issues, historical studies have an important role. From this perspective, in 2015, we established the Research Institute for the History of Global Arms Transfer. This institute, through comprehensive historical studies, aims to clarify the basic structure of the modern world that prevents the non-proliferation of weapons and disarmament. In coordination with many researchers overseas who belong to advanced research institutions such as the Department of War Studies, King’s College London and the Small Arms Survey at the Graduate Institute of International and Development Studies, Geneva, we are currently developing our joint research from various perspectives.

Specifically, our research centers on (1) clarification of the chain structure of arms and technology transfer, (2) clarification of the failing structure of disarmament and arms control, (3) international comparisons of the industrial-military-research complex and an industrialization model with an overemphasis on military affairs. Verifying the facts of the past by looking back on history, we aim to clarify the essence of issues that the modern world should overcome. A social collaboration policy of Meiji University stipulates that any research or social collaboration activity for military purposes shall be prohibited. Based on this philosophy, our institute has a policy to provide our research results widely to society by using various methods and to more actively develop the conversation with society.

* The information contained herein is current as of February 2018.
* The contents of articles on Meiji.net are based on the personal ideas and opinions of the author and do not indicate the official opinion of Meiji University.