“The beginner’s mind is found many times in a lifetime”: the true meaning of Zeami’s words

Noh drama is said to have the longest history of any form of traditional theater worldwide which remains in existence, and has been designated as an item of World's Intangible Cultural Heritage. As an important component of Japanese culture, it also has a place in the Cool Japan strategy, which aims to disseminate the country’s culture to the world. Writings on the theory of performing arts, such as “The Flowering Spirit” by Zeami, a figure who developed Noh into its complete form in the Muromachi Period, are lately being acclaimed as works transcending this genre to become essays on life, rich in hints on how to live which are relevant even to us in today’s world.

Zeami’s innovation, born out of his relationships with others 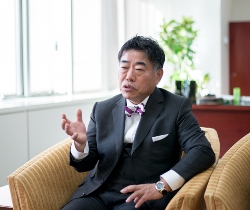 It was Zeami, known during his lifetime in the Muromachi Period as “Sarugakushi,” who developed Noh into the mature form which we watch today. If we look at the totality of his achievements, we can see that they are exactly what is referred to nowadays as “innovation.” The theory of innovation was established by Peter F. Drucker, one of the representative thinkers of the 20th Century who has been called the inventor of modern management theory. He said that innovation is not simply technological progress, but rather the creation of new approaches or applications. In order to achieve this, he teaches us that it is important to bring together existing objects and ideas to produce new combinations. In fact, in the era in which Zeami lived, there were various styles such as Sarugaku and Dengaku within Noh, a performing art which comprised the three elements of song, dance, and story. By combining these existing performing arts, Zeami created a new style, the archetype of today’s Noh.

Of course, the creation of something new does not merely require the combination of existing elements. Zeami left many works on the secrets of the art which he and others had created in order to pass it on to his descendants. One of these books is “The Flowering Spirit.” In my opinion, “relational” is a key word which allows us to unlock the mysteries of this work. This is because Zeami believed that simply doing as he and other artists wished was not enough to ensure the survival and development of Noh, which was finally gaining recognition from society. Rather, he thought that it was important to develop a relationship with the audience which allowed him to draw closer to them in order to be constantly aware of what they wanted and to include it in performances. For example, his Noh plays made use of stories known to all his contemporaries, such as the Tale of the Heike or the Tale of Genji, and the principal characters, known as “Shite,” wore Noh masks to portray the characters in ways that were both easy to understand and beautiful to watch. In addition, knowing that the “Dance of the Heavenly Maiden,” a graceful dance, was popular in society, he incorporated similar dances into the story. In other words, the elements which he combined were those which were well received or thought to be beautiful or interesting by public. Bringing such elements together after careful consideration, he was able to surprise and move his audience with a new type of Noh. This is what he meant by “The unusual is the flower.”

Moreover, Zeami tells us that the countryside is also important, and not merely the capital, the home of the warriors who were the patrons of Noh. This was because the establishment of a broad support base meant that even if one segment was lost, he would be able to rely on others. We can perhaps say that this was one aspect of Zeami’s survival strategy. In fact, Zeami and his companions went on tours to Suruga and other regions. However, he said that the Noh theater performed in front of the warriors, who had become the nobility of the capital, was different from that performed for the ordinary people of the countryside. This was not a question of which was better or worse; rather, he meant that it was important to have a good grasp of the venue and of the relationship with the audience and to put on the performance which would be most readily received by them. Moreover, he wrote that when performing Noh at banquets and similar occasions, where the audience had been drinking, the dances had to conform to this mood. That is to say, it was necessary to do what is known today as “reading the air,” accurately sensing the atmosphere. Simply attempting to impose something on others by force will not lead them to accept it, and will end in failure. By carefully observing the other person and grasping the situation correctly, it is possible to adapt one’s actions on the circumstances. In this way, a new atmosphere can be created in this setting, finally enabling the implementation of one’s intentions. As Zeami puts it, “Not limiting oneself to a particular setting produces the flower.” Just because a Noh performance was well received in the capital does not mean that it should be performed the same way in the countryside. Refusing to be content with a single formula, and instead constantly assessing one’s counterpart in order to respond flexibly, leads in the end to achieving what one aims to do.

The innovation initiated by Zeami, with its creation of new combinations and flexibility of response, always presupposed the existence of another party. His innovation saw the light of day in the context of the relationship with this other. The result was the establishment of Noh as an aspect of traditional culture that has endured over a span of more than 600 years. Zeami’s method of innovation is surely a technique that can be put to use by today’s organizations and businesses.

Zeami’s words provide us with many hints for life in the present day, but some of them have been misunderstood. “Do not forget the beginner’s mind” is understood today as meaning that one must not forget the resolve with which one began to study something. However, Zeami said that “the beginner’s mind” does not occur just once; rather, there are many such instances during a single lifetime. In “The Flower Mirror,” he talks of the beginner’s mind which occurs during youth, of that which is found on different occasions over the course of a lifetime, and of that which appears during old age. He says the following about the beginner’s mind of youth. At about 20 years of age, newcomers receive a lot of attention from those around them, but this is no more than “The flower of the moment,” one which lasts only a brief time. Complacency about such attention prevents growth. He writes that it is important to become aware of one’s own immaturity around 24 or 25, listen to those with more experience, and refine oneself. Upon reaching middle age, those in one’s entourage become bored, and personal growth ceases, leading to weakness. The ingenuity to overcome these periodic obstacles is the beginner’s mind which is found at different points in one’s life. Lastly, the beginner’s mind of old age is ability to discover how to surmount the deterioration of one’s physical health and beauty. Zeami tells us that the dances which his father, Kanami, performed right up until his death were “Like a flower which blooms on a huge boulder.” They did not resemble the splendor of flowers in full bloom, but rather were like a single flower blooming on a rock. However, he writes, it is precisely the beauty of this flower which is the product of the beginner’s mind which occurs after aging, and which is the ideal of art. Growing older certainly means a series of losses: physical decline, diminishing beauty. Old people cannot move in the same way as in their younger days, and are not beautiful or radiant. However, by understanding this ongoing loss and striving to find ways to compensate for it, the process of loss is transformed into a process of drawing nearer to consummation. While European performing arts, whether opera or ballet, could be called arts of youth, Japanese traditional performing arts, such as Noh, Kabuki, or Rakugo, approach their zenith with age. In other words, they are considered as arts that are perfected over the course of a lifetime. It was Zeami who first put this concept into words. In this sense, Zeami’s words, which say that the beginner’s mind exists even after growing old, can be taken as encouragement for us nowadays, as we face an aging society. Even after losing various things which we possessed during our youth, we can draw closer to completion as humans by finding our own ways to adapt to these changes. 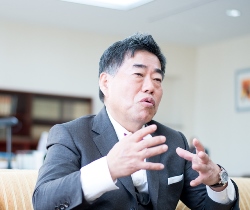 Noh itself has been passed down in unbroken succession, and has now become one of Japan’s traditional arts. However, Zeami’s works, such as “The Flowering Spirit,” were esoteric texts, and have not continued to be read in the same way. They became widely known from the Meiji Period, and I believe that it was my research which subsequently provided the impetus for their interpretation in ways relevant to our lives in the present. The reason why this was possible for me is that I myself was a producer of Noh. In 1980, I set up the “Hashi no Kai” Noh association, holding Noh performances in venues such as cafes, art galleries, and the concourse of Tokyo station in order to disseminate the art more widely. This method was precisely the one used by Zeami when he performed on temporary stages set up on streets and riverbanks or in temples and shrines, and toured the provinces repeatedly in order to cultivate a new fan base. My awareness that Zeami’s words are applicable to the present is based on my own experiences.

I have heard that my writings have recently been introduced during presentations aimed at business people, and I strongly encourage them, and everyone, to read Zeami’s books. You are sure to encounter pearls of wisdom which will give you much food for thought. I also hope that you will go to see Noh performances. I believe that their content will move each and every member of the audience and prompt new insights.