A comfortable-to-use tool is no longer a “tool”

Nowadays, more and more digital equipment devices are all around us. This trend means that more and more things are being automated, making our lives easier. On the other hand, an increasing number of people feel ill at ease in such a digital society. What is the source of such discomfort? Is there any means to rectify the situation? A number of studies are being made to answer these questions, and my colleagues and I are conducting one of them here at Meiji University. 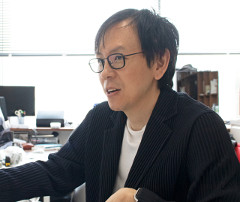 Do you know the term “sense of self-ownership”? It was originally a buzzword in research on the sense of self in cognitive science and neuropsychology–a type of research dealing with the question of where the sense that you are yourself comes from.

Where does that sense–or the sense that your body is your own–come from? In other word, why do you think that your hands are your own rather than the hands of another person? “Sense of self-ownership” is a term that helps us shed light on these questions.

What about a tool that you may have in your hand, then? Top tennis players say their racket is an extension of their body. The racket with which they can hit the ball as they please must feel like part of their body to them. This is an instance where they have a sense of self-ownership of their racket.

In this case, is the act of having a tool in your hand what counts? Does that act literally make the tool an extension of your body? Does this in turn allow you to have a sense of self-ownership? If that is the case, you can’t have such a sense in relation to something that you have no way of physically having in your hand–for example, a cursor that is controlled through mouse operation on your computer screen.

This is why we conducted what we call a “dummy cursor experiment.” We automatically moved many cursors of the same color and shape running freely on a computer screen except one cursor that followed the movement of the mouse, in order to see if people could identify the real cursor they moved.

We found that people could identify the real cursor. On top of that, observers looking at the screen could not identify it.

In other words, the experiment demonstrated that the visual information called “cursor” can feel more like part of yourself, rather than anybody else.

In fact, a growing body of evidence suggests that the key to having a sense of self-ownership is alignment with the self, which does not necessarily entail your body or the physical condition of having the tool in your hand.

It is likely that people have a sense of self-ownership in relation to their personal computer (PC) since it is aligned with their act of operating it.

Such a PC can become slow in performance for some reason. The user of this PC may describe its performance as being slow; the user may even describe the PC as being “heavy.”

I believe this kind of sense probably stems from a sense of self-ownership of the PC itself that the user has developed through the act of operating that particular PC. An unstable PC that often shows slow performance, freezes, and then goes back to normal irritates the user, who may say, “This PC is uncomfortable to use.” The user loses the sense of self-ownership of that PC and begins to feel uncomfortable using it.

For example, a time lag of 0.3 seconds between mouse and cursor movements makes the user uncomfortable; she begins to lose the sense that she is in control of the cursor.
A mouse lag of 3 seconds gives the user the impression that she is looking at a PC operated by someone else. In short, no time lag is key to the quality of being aligned that creates a sense of self-ownership.

In fact, we experienced this phenomenon more than a decade ago. Before iPhone hit the market in 2007, mobile device manufacturers made great use of beautiful icons and lovely animations in pursuit of a more user-friendly interface.

After the launch of iPhone, however, an overwhelming number of mobile device users switched to the Apple product. Shocked by this trend, other mobile device manufacturers added more twists to their icons and animations. But they failed to regain most of their users.

Mobile device users opted for iPhone because it was comfortable to use, not because it looked nice. That comfort stemmed from the immediate alignment between iPhone and the user’s operation. In other words, iPhone gave a sense of self-ownership to its users.

Animations that users cannot control do not belong to them no matter how lovely they look. Users feel more comfortable and pleasant when they feel that the tool in question is an extension of their body. iPhone gave users a sense of alignment between themselves and the product because they were able to operate it with no time lag. 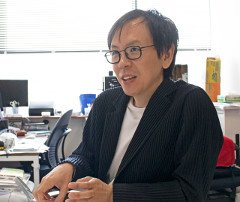 A sense of self-ownership, which can be a philosophical proposition, can be better applied to designing many tools around us and, by extension, social systems in terms of motion alignment, as the abovementioned iPhone shows.

A sense of self-ownership of something arising from the alignment between you and that thing is also a sense that that thing is your business, not the business of somebody else.

The sense that something is your business may come from your past experience. One of the expressions that take advantage of such experience is “equivalent to X times the size of the Tokyo Dome,” which is often used to refer to a large area. Yet this particular expression is irrelevant to those who don’t know the Tokyo Dome.

In that case, how does the expression “equivalent to X times the area of the sports ground of your high school alma mater” sound to you? It may allow you to imagine how large the area in question is as a matter of relevance to you.

Inspired by this idea, one of my students has developed a software program called “converter to your own measures.” This program allows you to convert, for example, the price of a product you want to buy from an online shop to the number of hours you need to work in your part-time job in order to buy it, or the distance to your destination to the number of times the distance between your home and the nearest station.

Although you need to register price, distance and other data relevant to you in advance, the program enables the conversion of prices, distances, etc. to your own measures without a time lag–something you usually have to do in your mind.

We are also thinking about designing the way voters cast their ballots so that voting will be more relevant to voters. One idea might be to make the ballot box produce a chink sound every time a ballot is cast into it. That would be a kind of alignment between voters and the act of voting, making the act more relevant to them.

Even such a small effort might result in a higher voter turnout, although a major reform of the election system might be more effective.

It is said that, in the near future, advanced AI and robots will replace many of the things that are currently done by humans.

Such a society would be convenient in its own right. But the lesser need for human intervention might mean fewer opportunities for alignment in society, thus allowing people to lose a sense of self-ownership in relation to society. That would further estrange people, who might lose the meaning of their existence and even the sense of being alive.

Although the process of automation will increase convenience, this process must be designed to ensure the kind of alignment I described earlier. Otherwise, we will be in big trouble.

The more I study the sense of self-ownership created by immediate alignment, the more I become aware of the wide applicability of such alignment.

Alignment without a time lag can be applied to workplace settings. My advice in this context is to respond quickly to calls by your superiors and colleagues and to job-related requests, rather than taking much time to examine what they are all about.

If you show such immediate alignment, your superiors and colleagues will give you a sense that you really belong to the organization, and you may develop such a sense on your own.

If that happens, you may find yourself on better terms with the superiors or colleagues you previously felt awkward with. That in turn would facilitate your work within the organization.

As a researcher on the sense of self-ownership, I believe that just eliminating time lags of various kinds will pave the way for many good things to happen.