In agriculture, a person is big data. The goal is an applied system with farmers’ accumulated knowledge

Recently, in Europe and the US, multi-input agriculture, which aims to improve productivity by the use of excess fertilization and spraying pesticides, has begun to be reconsidered from the viewpoint of soil pollution and environmental destruction. In Japan, even when considering such environmental problems, there is a movement that aims for intensive, large-scale agriculture. However, it is known that there are serious issues as well as environmental problems feeling Japanese agriculture.

Will the number of farmers unaware of how to deal with crops increase? 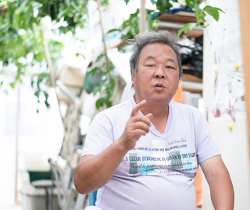 In Japan, cultivation in large-scale greenhouses in hopes for a greater yield and the improvement of quality is common frequently. Taking into consideration social needs, greenhouse cultivation is likely to increase hereafter. However, recently, among the successors in agriculture, those who only know greenhouse cultivation are increasing. Greenhouse cultivation protects its crops from the outdoor environment large and rapid changes. For example, if these farmers do not know how crops react against unexpected cold, available methods to apply are extremely limited if the heater in the greenhouse brakes down. However, greenhouse farmers in lots of experiences could select and apply available methods against the problem, because they normally have much experience and sense growing crops outdoors. The essence of knowledge in agriculture is not present in greenhouse farming, but accumulated in open field farming. Sharing this knowledge with their successors will be an important theme.

Family-owned farming had been a main style of Japanese agriculture. The essence of knowledge in agriculture is stored with them. How should we pass these essences to inexperienced farmers who are going into agriculture fresh? We included that purpose into ZeRo.agri system we developed, which supports drip-fertigation in greenhouses. Drip-fertigation is a cultivation method to supplies a liquid fertilizer solution to plants grown on soil through drip irrigation tubes. ZeRo.agri consists of a controlling unit and driving device to supply the solution, and is equipped with a solar radiation sensor outside the greenhouse, and a soil sensor inside the greenhouse. The soil sensor measures temperature, water content and electric conductivity (EC) of the soil near crops. Soil EC alters depending on the amount of fertilizer component ions especially nitrate. ZeRo.agri system adopted in the greenhouse sends data measured by sensors to the Cloud via the Internet. It calculates the amount, concentration and duration of the solution to be supplied, and based on the calculation activates the controlling unit and driving devices, so the mechanism is automatically supplying the appropriate solution.

The first step of control logic is based on the factors of the environment affecting the crops. When solar radiation is less in a day or in an hour, less solution is supplied due to less crop absorption of water and fertilizer. When the solar radiation increases, more solution is supplied. Furthermore, the crop having grown to a large size requires a greater amount of water and fertilizer even if the solar radiation is the same. Cloud drives devices to control the amount and concentration of solution to the appropriate levels, because it keeps water content and EC of the soil constant. Farmers can grow crops without failure if they entrust things to ZeRo.agri. An example is a young person who graduated from the art department at a college, and was a beginner in agriculture started cultivating tomatoes in greenhouses. In the first year, he became confused with everything and ended up with terrible results. However, in the second year he adopted ZeRo.agri and could harvest a normal greenhouse yield. Using this system, even someone with insufficient knowledge of irrigation and/or fertilization can start successful agricultural activity.

Quantify and share the experience and sense of professional farmers 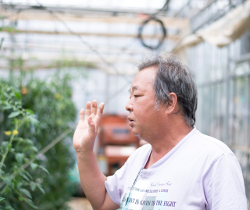 After acquiring ZeRo.agri experience, a farmer can operate in his own way. He can re-set the control targets of soil water content and soil EC in ZeRo.agri. In the second step of control logic, if the farmer feels plant water and/or nutrients are excessive or poor, he can improve plant growth by decreasing control targets of soil water and/or soil EC, or by increasing them. Even with the same tomato plants, lower soil water can increase the sugar content of fruits, but decrease the yield. If the farmer determines the adequate level of soil water content for tomatoes of high sugar content in his conditions, he can select the production ratio of tomatoes, which have higher yield with lower sugar and lower yield with higher sugar depending on his market strategy. He can easily adjust the target levels by connecting a personal computer or tablet-type device to the Cloud. Furthermore, the records of adjusted target levels are successively stored in the Cloud. Normally farmers who cultivate the same crop flock to a great leader, and make a community to get and exchange information. Farmers can easily refer to the recorded ZeRo.agri data of the leader. As a result, the more farmers who use ZeRo.agri in the same community, the more information is added to a community database. This is an important function of ZeRo.agri. Even if a person is willing to inherit the experience and beliefs of those who engaged in farming over many years, it is hard to verbally explain and pass this knowledge on. However, quantification of that experience to some numeric data facilitates the transfer of knowledge. Actually, there have been many attempts to utilize big data at agricultural production sites. However, collecting measured data requires huge amounts of funds, and the logic for analysis is insufficient. I rather consider it to be more beneficial to analyze the sensitivity and behavior of farmers. A human is, in a way, an excellent sensor. For example, professional farmers use and check sensors as references. They judge the condition of climate, soil and crops not only by measuring with instruments, but mainly by their own senses, that is, looking, touching, smelling and tasting. The buildups of experience and sense are, in a way, big data. I believe that many people can learn and facilitate the transfer of techniques to subsequent generations, by quantification and storage of the values.

ZeRo.agri can be applied for various proposes

Farmers can use ZeRo.agri system in various ways. For example, when we consider how to protect crops from heat, we generally think of protection using an infrared cutting film covering on greenhouses to reduce heat transfer into, and/or mist spray system introduction for evaporative cooling. However, we should consider taking advantage of the function of crops for cost saving. These technologies are extremely interesting and feeling additional benefits. On days when the temperature is high, we convert suppling solution into water around midday, and additionally supply concentrated solution early in the night. Experiments on the control of solution application against heat were conducted in Rikuzen-Takata, Iwate Prefecture. Every year, the cucumber yield decreased drastically after the middle of July, when it became hotter. However, ZeRo.agri reduced the decreasing yield and resulted in the total yield increasing approximately 35%. Physiological functions are based on the technology against heat. First, crops absorb water more easily than solution. Water absorption reduces water stress in plants especially around midday. Second, crops can escape from the damage of high concentrated soil water when they grow sufficient roots in moderate concentrated soil water. Third, crops can absorb nutrients without absorbing water from solution early in the night. This capability is functional only when the roots directly touch the solution. Thus, solution must be constantly supplied to the roots, which is impossible, except by fertigation. This is one of the remarkable accomplishments in our research. ZeRo.agri judges whether this control shall be carried out or not in the day based on the temperature in the greenhouse. On the day when the control is carried out, ZeRo.agri calculates insufficient amount of nutrients after the sunset, and then determines the amount and concentration of solution to be supplied early in the night based on water content after the sunset and daily accumulated solar radiation. We are working to develop such technologies using physiological functions now. Even technologies, backed by science firmly, shall be improved their qualities by accumulating more information that farmers those who use ZeRo.agri carry out.

In addition, in conventional greenhouse cultivation, farmers spread fertilizer on the land, and then cultivate soil using a tractor. Then they put in irrigation tubes, plastic mulch and stakes before each cropping. At the end of each cropping, farmers remove them and prepare for the next cropping. However, fertigation needs no land fertilizing, so that non-tillage cultivation is possible. As a result, we have generated advanced non-tillage crop rotation. In unheated greenhouses in Rikuzen-Takata, cucumber has been grown from the spring to the early fall and spinach was seeded in the late fall and harvested in the early spring, so that conventionally two crops were cultivated in a year. With advanced non-tillage crop rotation, lettuce seedlings are planted after cucumber, and spinach seedlings are planted after the harvest of the lettuce. By planting spinach again after it is harvested, growing four crops in one year has been made possible. During this rotation, tillage with compost application is carried out only immediately after the end of cucumber harvesting. Regarding lettuce and spinach, the next seedling is planted immediately after the harvest. Sometimes lettuce and spinach grow together, sometimes big and small spinach grow together. Farmers feel confused by the rotation that they never experienced. However, this method of course increased their income, and decreased the labor hours spent on tillage and planting set-up. Now we are continuing our investigation on the cultivation of five crops in a year. For advanced non-tillage crop rotation, ZeRo.agri plays an important background role. The control of supplying a solution for such a long period is unlikely without ZeRo.agri. If there is anybody who can do it, he will surely be mentally exhausted.

For the future of agriculture, it is important to support family-owned farming

As a countermeasure to promote agri-business, the national government adopted the policy to introduce large-scale greenhouses at high levels. When we consider the future of Japanese agriculture, it is certainly an important measure. However on the other hand, it has a disadvantage that discarding family-owned farming will not only lead to the loss of experience and sense in agriculture, but it also means losing the backbone of small rural communities. Furthermore, the Japanese environment suffers many natural disasters, including flooding, typhoons and earthquakes. When these occur, larger agricultural equipment and facilities incur more severe damage. For the dispersion of risks, an initiative for enlarging the facilities that can be easily restored by individual farming household is needed. Supporting such farming, concurrently, we would like to expand the ZeRo.agri system as a tool to assist the family-owned farming.