The Nobel Laureate, Professor Ohsumi’s lab was filled with freedom and curiosity

The 2016 Nobel Prize in Physiology or Medicine was awarded to a Japanese professor, Yoshinori Ohsumi, for elucidating the molecular mechanisms underlying an intracellular function called “autophagy”. His research outcome holds promise for treating Alzheimer’s Disease and cancer. His Nobel Prize win may bring attention to basic science, which can lead to such applications.

The Nobel Laureate, Prof. Ohsumi’s humility in the lab 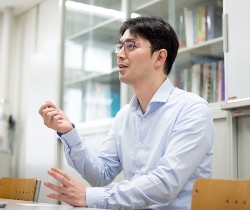 Prof. Ohsumi’s lab was the first lab I joined as a post-doc researcher in 2001. Prof. Ohsumi was such a friendly professor, never bossy even to me and other young people, who were just learning to be researchers. He treated us as equal when discussing research. He liked to drink, and at times he would sit at a lab meeting table after work to drink with his researchers. Such a time, he would not only talk about research, but enjoy casual, idle conversation with us. The atmosphere was filled with friendliness and sense of unity. We almost never felt the hierarchical relationship which would set him as the boss and us as his underlings. The lab, consisting of about 10 researchers and students back then, reflected his personality; each of us was working independently, instead of having an organized structure and being ordered to do assigned parts.

Our research was of course conducted under the theme of autophagy. But the lab had distinctive diversity rarely seen in Japan. Prof. Ohsumi was an expert in yeast, some researchers using animals, others, plants. My expertise is in plants, but I learned a lot from doing research in such environment. My framework of thought was slightly different from that of other researchers using yeast or animals. Because plants take longer time to grow than yeast or animals, the methods and sense of time as well as the attitude in research naturally differ. Being surrounded by researchers with different expertise, we were able to influence each other in various ways, finding new perspectives and being inspired with different ways of thinking. I think the freedom Prof. Ohsumi gave us created such a lab. He never forced his ideas to us. He let even young researchers and students do their own work. As a researcher, Prof. Ohsumi investigates to the very bottom of even a simple question. I personally learned a lot from his attitude towards research. I will always treasure having worked in a lab led by a Noble Laureate.

Autophagy: the ingenious system of organisms 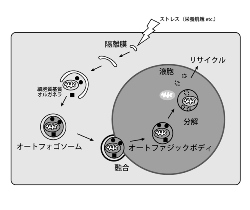 The concept of such a mechanism emerged during the 1960’s, when researchers discovered accumulation of degrading organelles and proteins enclosed in a membrane vesicle in a mouse cell under starvation. It was later named autophagy (self-eating), but scientists deadlocked over its molecular mechanisms. It was Prof. Ohsumi who broke through this deadlock, after almost half a century since the discovery of this autophagy phenomenon.

Still, as Prof. Ohsumi says, the underlying mechanisms of autophagy is not completely elucidated. For example, when autophagy is disrupted in a mouse, the mouse dies right after its birth, because it cannot drink milk. The lack of clearing unwanted proteins and/or organelles probably causes unnecessary build-up in the mouse’s brain cells, resulting in disruption of normal brain function. Restoring autophagy only in brain cells enables the mouse to drink milk and grow. However, many defects still arise, causing the mouse to die early. We know for sure that autophagy has an essential role for the survival of organisms. But we do not know why blocking autophagy causes such loss of function. Our curiosity will solve this mystery. As human beings, such phenomena caused by ingenious systems of organisms enthrall us. We crave to understand the underlying mechanisms.

Curiosity is the motivation for research 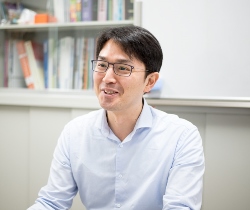 I conduct research on autophagy in plants. Unlike animals, plants cannot move from where they sprouted. Plants thus have functions to appropriately respond to and overcome various environmental stress conditions. For such functions, degradation systems such as autophagy should play an important role. Furthermore, as photo-synthesizing autotrophs, plants are completely distinguished from other organisms. There are probably plant-specific roles of autophagy. I am attracted to the uniqueness of plants.

For example, plants let their own leaves wither so that they can transfer the nutrition from their leaves to the seeds to pass their life on to the next generation. A few years ago, we discovered that autophagy contributes greatly to this recycling system. However, even when autophagy was disrupted in plants, they did not immediately die like a mouse would. The plants survived and were confirmed to be capable of even producing seeds to turn the generation cycle. This result was unexpected for us. Because plants cannot move and need to adapt to environmental stress, they may be equipped with multiple back-up systems, avoiding dependency on a single system like autophagy. We desire to understand such mechanisms. The pure interest and curiosity are the biggest motivation for researchers in basic science.

Basic science is fun and important 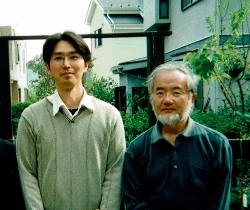 They say the outcome of Prof. Ohsumi’s research could lead to the cure of many diseases. Though I am not an expert in the relevant fields and cannot say anything definite, I do think it is highly possible. My research on plants may give a clue for solving environmental problem or food shortage in the future. Such development to applications is always in the back of my head. But, as I said earlier, it is my desire to elucidate simple questions that drives the day-to-day research. Research does not always begin by aiming for applications and industrialization; it can sprout from questions and curiosity. In the end, applications can be developed from such research, which eventually raises our standard of living and generates wealth.

From this perspective, I am glad that basic science is drawing increasing attention because of Prof. Ohsumi’s Nobel Prize. I hope this triggers deeper understanding of how intriguing and important basic science is. If general public starts to actively support scientific research using systems like Crowdfunding, Japan may grow into an outstanding country with a higher level of science.