Create an expression for informed consent

I am sure most of you feel that these days, physicians give you a longer explanation than before when you receive treatment for an illness. The Medical Care Act was revised in 1997 to stipulate the obligation to perform the action of explanation and consent, because the doctrine of informed consent had become significant in medical practice. However, how well have you understood the physician’s explanation? There is an unintelligible barrier of medical terms. 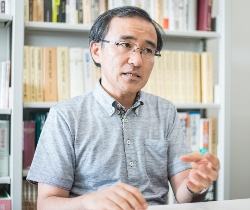 Before I worked at Meiji University, I used to work at the National Institute for Japanese Language and Linguistics, where any issue to do with the language of Japanese was dealt with and improved. In those days, the former Prime Minister Junichiro Koizumi snapped at government officers not to use Katakana words, whose meanings are difficult to capture, and suggested they change those words into easy to understand Japanese words, and I was in charge of this work. It is true that we say compliance instead of saying business ethics, or use the phrase of our town’s identity without understanding its meaning. We have suggested to central government ministries and agencies, prefectural offices, ward offices, municipal offices, etc. that they should change the concept and meaning expressed in katakana into Japanese words. This suggestion was welcomed by people in public offices and some staff themselves established a Language Review Board in order to improve such situations.

During the course of improvement, we changed the phrase of Informed Consent to Nattoku Sinryo (Convincing Medical Care). Both the words convincing and medical care are usually used, but they had not been used in combination before. We decided that this combination was the best way to express the basic principles of Informed Consent. However, the phrase Convincing Medical Care was severely criticized by physicians throughout Japan. Surely, Informed means to be given an explanation, while Consent means literally to give consent. Neither of them have the meaning of convincing nor medical care. In fact, the Japan Medical Association had tried to introduce the phrase Explanation and Consent. In addition, the association considered it unpleasant of us to change and use the phrase without their permission as if we, who were not health care practitioners, had ignored the phrase translated by the association. To tell the truth, the act of describing technical terms using other words was also criticized by the industrial world and the judicial world, as well as by those in the medical field. Our suggestion of using other words was not willingly accepted by the specialists because we were outsiders, unlike the case where we were making suggestions to public offices.

Therefore, we thought it necessary to work in each special field, instead of dealing with the whole concept of loan words. It is in the fields of medical care and welfare that ordinary people have the most trouble understanding, and at the time, the concept of informed consent was being promoted, and so we launched the Words in Hospital committee to work on the task of changing medical words as well as loanwords to other words that were easy to understand.

A book to support the understanding of informed consent was completed

Based on our previous reflections, we also had physicians participate in the committee with us, the linguistic researchers. Naturally, physicians understand medical care well and the experienced physicians had built good communication with their patients and had the know-how to say and explain difficult technical terms using other words. After taking the physicians’ opinions on board, we first made a report-like brochure, and distributed it to major hospitals, medical associations, and nursing associations, we collected opinions from the health care professionals who read the brochure, and after adding modifications, finally completed the book Understanding Hospital Words Easily, which has now been sold in book stores.

This book is characterized by detailed explanations of the following points, rather than simple explanations of the meaning of difficult medical terms, that is, a medical dictionary: What is the concept of the word, what is the treatment or the disease, what is the point, what is important from the patients’ point of view, and what parts do the patients need to be informed of in order to cure those patients as a physician. We thought, only through this approach, would we realize how to explain to patients and the way of using other words. Behind the need for such a book, is the change from the time when patients were treated following their physician’s decision without saying a word, to the time when patients are now given a full explanation of their illness and its treatment by their physician and voluntarily consent to or refuse the physician’s policy with the understanding of content, that is, the time when the system of informed consent has become popular. That is to say, patients themselves have been in a position to be respected regarding their decision about their treatment and physicians have been responsible for providing a satisfactory explanation to patients (non-experts) to support their decision as an expert.

It is said that this finished book will be used by many health care practitioners including physicians, and will be referred to by students, future physicians, in medical schools, and when giving explanations to patients in the settings of a practice. In addition, patients at first failed to see what they could not understand. However, after reading the book, they say that they came to understand at what points and at what stage they could not understand. In this way, I hope that the quality of informed consent will be more and more enhanced because of the development of physicians’ communication skills and more patients with the ability to comprehend.

Linguistic research skills to spread communication between experts and non-experts. 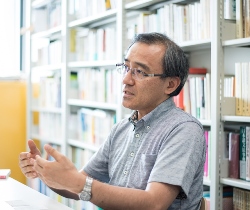 This book, Understanding Hospital Words Easily, is not a simple medical dictionary, as described previously. What enabled this was the use of corpus, which is one of my research subjects. The term corpus refers to a large-scale electronic lexical database. The corpus enables the user to collect and extract words by statistically processing the data based on their frequency of use. It can extract high-frequency words from hundreds of thousands of medical terms in published literature such as medical journals. In addition, it also extracts, from those extracted words, words that are used in health magazines etc. for the public, and then selects those words of high importance, which enabled us to effectively move ahead with our work. In addition, the corpus enables us to fully understand how a word is used in a real sentence. We knew, through using corpus, not only the literal translation of the word but how the word is used in Japanese sentences and its meaning, so that we were able to create another expression which was easier to understand, and also offer a good explanation for the new expression. For example, the word shock means poor blood circulation in medical terms, while state of shock refers to a life-threatening condition that requires immediate treatment. On the other hand, in daily life the phrase means a state of simple surprise and is used to express a less severe state. It would be very dangerous for patients and their families to understand the state as a state of simple surprise when the physician states that they are in a state of shock. Therefore, these words, which have a different meaning when used as a medical term to the same word when used in daily life, became easy to understand by using the corpus. It is considered that these sorts of linguistic research skills will become more and more important in lowering the barrier between experts and non-experts, and building communication.

It is up to experts to make their terms more easily understood by non-experts, I think. Not only in the medical field, but it is also similar in the judicial world with the start of the lay judge system and in scientific fields including the nuclear power plant industry who are in charge of explaining the risks associated with the plants. Equally, not only the experts in each special field but also each one of us makes decisions in society and it is important to responsibly participate in decision-making. To do so, we also need to acquire a minimum level of knowledge. Please ask the experts if there is anything you do not understand. It is also an excellent form of participation. Then, these experts have to responsibly offer explanations which are easy to understand. Experts always have to devise ways to provide explanations which are easy enough for non-experts to understand. I think it is important for both experts and non-experts to continue to make such efforts.