Confronting the truth of gated communities and studying their “possibilities”

It is not the wealthy, but the middle class that have need for gated communities 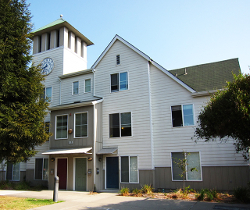 A gated community refers to a community structure where an area encompassing 300 to 500 or sometimes about 1,000 homes is enclosed in a fence so as not to be accessible from the outside, and a gate restricts access to only residents of the community and those permitted by residents. There are many such communities in the US, but they are also increasing in China, the Philippines, Latin America, etc. Historically, cities in Europe originated from fortified cities and in Japan, there still remain moated settlements, villages surrounded by moats. Security was the main purpose of these cities and settlements. Therefore, contemporary gated communities are also suggestive of such historic cities from their defensive appearance and have an image of exclusivity and a closed nature, making them a target for criticism. In other words, today, they are communities for the wealthy to withdraw from society and such communities are a symbol of the gap between the rich and poor. Such gated communities do actually exist. For example, a gated community near Hollywood is a community for so-called celebrities to live without encountering paparazzi. However, there are actually very few gated communities that are created as fortresses to protect their residents from a society full of criminals and people who do harm. Instead, for the majority of gated communities, the purpose is for communities to manage common areas and facilities themselves.

For example, imagine a mansion of a wealthy person. Besides the house, there may be a tennis court, pool, or even a beautifully tended garden. It is impossible for an ordinary person to own such facilities. However, by sharing these facilities in a neighborhood of 300, 500, or 1,000 households, everyone can make use of the facilities. In the US, there are even communities that share a golf course. Similar to tennis clubs and golf clubs owned by corporations and surrounded by fences, most gated communities are communities that share these amenity facilities and surround those shared spaces with fences. In other words, not all gated communities are symbolic of the gap between the rich and poor. The truly wealthy do not need to live in gated communities; they make their own land into gated homes. Most gated communities are developed for the so-called middle class. From the perspective of land developers, rather than a building tennis court and pool for each house, sharing the facilities and instead building more houses within the area will allow for more and cheaper houses with rights for pool-use to be sold to those who cannot afford a house with its own pool. Land developers can drastically heighten utilization efficiency of land by building gated communities.

However, that is not the only truth of gated communities. In fact, most gated communities are developed not in urban areas, but in the suburbs. The structure of social stratification in the US is largely divided in urban and suburban areas. Also, there are many regions in the US that do not have what are called cities, towns, or villages in Japan (unincorporated area). Since such regions are directly administered by what are called prefectures in Japan, it is difficult to provide comprehensive services. As such, gated communities have a governing function to self-manage the range of services normally borne by the local government. Like the management societies for apartments in Japan, the US has “Home Owners Associations” with strong organizational power, but in gated communities, management fees from the residents are used for managing garbage collection within the community, as well as the shared facilities, such as roads, parks, and pools. These operations are at times referred to as private governments.

In reality, in Japan the Building Standards Act stipulates that residential areas must connect to a public road, and therefore forbids construction of gated communities. Also, with public pools, gymnasiums, and tennis courts available at low fees in Japan, it may seem there is little to learn from the structure of gated communities. However, with Japan entering a period of low growth, a decreasing birthrate, and an aging population, completely relying on public government for various services and management as has been the case until now will gradually lead to unsustainability in terms of quality and quantity due to financial difficulties. So, discussion is starting on area management in which not only the government, but also private organizations like corporations and NPOs work together to cause various actions to heighten the value of resident services and the region. Gated communities offer valuable hints in considering such area management.

There has often been discussion that as the private government strengthens, the public government weakens. However, this is not always the case. It is true that in order to incorporate private power, the public whose methods are becoming dysfunctional cannot appraise or make judgment on the private’s ideas. Things to be entrusted to the private should be so entrusted. This scheme of entrusting things should be considered by the public and private together. For example, Osaka is beginning to endeavor in an Osaka version of a BID (business improvement district). There is also a project to entrust the management of large parks to private business operators. The City will not pay even 1 yen of management commission, but the private business operator will not only manage the park, but also run stylish cafes, restaurants, or shops and plan various events to raise the utility value of the park, while making a profit. If a private business operator focuses only on operating the shop, but neglects management of the park, such as caring for the lawn and cleaning, then the value of the park will not improve and profit will not increase. In other words, in order to raise the value of public space, it is necessary to reflect the opinions and interests of users. To do so would be to think of the balance of the interests of each stakeholder and create a mechanism that mixes the domains of the public and private. To just rely on the public or for the private to do as they please will not end in success.

Furthermore, with the creation of a private government, the public government’s responsibility regarding the provision of services will lessen. In the previous example, the City’s burden of park management expenses will cease. Also, for example, if more communities perform safety management themselves, the burden and expenses of the police and of maintaining public order will decrease. However, those who live in such communities and those who live outside such communities pay the same taxes. Then, in terms of business portfolio of a combination of businesses for a company with a diversification strategy, communities that increase tax revenue, but have private governments and a low demand for services, will be considered “cash cows” from the public government’s perspective. The public government is able to distribute its tax income to areas with more need.

As aforementioned, gated communities cannot be built in Japan. However, in terms of security, the apartments with automatic locks that are increasing in urban areas are like gated communities that grew vertically. By expanding the shared space and facilities and enhancing the awareness and structure for self-managing those facilities, the management style of these apartments will become more like private governments. Also, since traditional regional communities that advanced in rural areas are based too significantly on self-sacrificing volunteering, many are impoverished. But if business potential can be incorporated as endeavored with the Osaka-version BID, private governments may gain more opportunities to mix with the domain of the public government.

Rather than regarding gated communities as discriminatory or exclusive simply from their outward appearance or considering the self-management of private governments as a system that weakens the power of public governments, it is presently necessary to look upon the veiled truth and think of it as a hint for looking at the future of Japanese society.