Let’s start a philosophy that changes the pathetic to humorous

Philosophy seems to be attracting some attention these days. The rapid development in AI and IT has transformed our society, while simultaneously, psychology and sociology have been gaining more attention – why philosophy now? It may be that a way of thinking for casting aside doubts and concerns about the existing foundation is in demand.

Philosophy has a relaxing approach 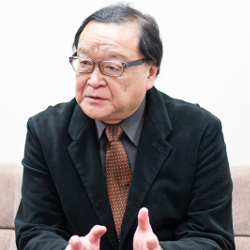 Many people call up the image of philosophy being an exploration of truth or a study into the fundamental meaning of life. In fact, philosophy covers these aspects, which are also important. However, philosophy is not only about such matters. For example, today many people are dissatisfied or doubtful about different things. Why do I need to go to work every morning on a train packed full of people? Why don’t things go as planned? Why do things I do go wrong? While it is necessary to contemplate the causes and pursue solutions, I also think it is very important to relax, to look at it differently. Considering things from a different perspective is a kind of pleasure – humor – that lets you escape from the current crushing, suffocating state you find yourself in. Not only attempting a frontal breakthrough by primordially thinking through, but also to dodge it in a way – I think that is also another tack philosophy can take.

Such an alternative way of thinking can sometimes be called an abductive inference, but in fact, many historical scientific discoveries are known to have been made in such moments. When we are troubled over not being able to find an answer in daily life, many of you may have the experience of a new idea popping in your mind while you are enjoying a coffee break, taking a bath, or just relaxing. That is brought about by a simple change in thinking.

Okinawa, on the periphery of Japan, is at the center of East Asia and fosters a non-homogeneous rhythm

Let’s think about a part of the periphery, for example. The periphery is away from the center or middle and tends to be considered outside of the mainstream. It may perhaps not have a good general image. Taking the geography of Japan for example, Okinawa is indeed on the periphery – say, for instance, on a weather map, Okinawa is sometimes framed and treated separately. However, if you looked at a graphic that correctly shows the location of Okinawa, while it is on the periphery of Japan, you can see that it is also the center of Southeast Asia, China, and Japan. Which means, Okinawa is located on the border of several different regions. Then you realize that Okinawa – the edge of Japan – is actually in a location that allows for easy networking with other regions. In fact, Okinawa has a history of functioning like a network hub connecting Japan with the rest of Asia. As a result, Okinawa fostered a different culture from central Japan. What that shows in the most is the Okinawan rhythm.

Fuyu Iha, the father of Okinawaology, known for his study of Omoro Sōshi, a collection of Okinawan songs and poems, points out the issue of the timings used in Okinawan sanshin (Okinawan three-stringed musical instrument) and the distinct musical progress and rhythm in Okinawan dances. The Okinawan rhythm does not only concern musical rhythms, but exists in every aspect of their daily life. Humans are said to be rhythmic animals: leading a private life subconsciously under a rhythm – what time to get up, do what, what to eat for breakfast, and so forth – and involved in rhythms constructed by society, community, or any other group, as well as different natural changes. There are also intentionally trained rhythms and rhythms acquired through subconscious development. Diverse elements intermingle to make our bodies function at a certain rhythm. When people living in Tokyo visit Okinawa, they often feel that time flows differently in this land, and this can be attributed to Okinawa establishing its own rhythm while taking up influences of various rhythms through active networking with many regions. In contrast to the existing conception that a periphery is something trivial, if you just changed your point of view, you notice that it can develop a rich network of its own by being at the intersection of a number of regions and forming a center of its own. The unique pauses and rhythm of the Okinawan sanshin born in such an environment may bring a kind of lightheartedness, a relaxation when reflecting back on everyday life in bustling Tokyo. 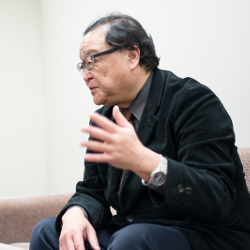 Nevertheless, when we are exposed to an alien rhythm, we may react in a way to eliminate that. This happens when you feel that your rhythm has been disrupted by another rhythm. This may sometimes lead to developing anger or hatred. As a matter of fact, the rhythm that shapes the community is binding us without our realization. Rhythm precedes ideology (or meaning). People react more strongly to rhythm than meaning. What happens then is that the antipathy against that ‘disruptive’ foreign rhythm no longer cannot be handled with reason. First, the rhythm defines the details of the meaning.

A population will always develop and form some kind of rhythm. Education within that population is also a process of teaching a particular rhythm. Students learn and acquire morals, a set of values, and even the conception of time in daily life, as constituents of the particular rhythm. However, on the other hand, education means to learn about other rhythms. What that means is, for instance, the encounter of Japanese language and English and not the existence of Japanese and English. Our current rhythm is not born from a blank slate in the first place. Multiple rhythms meet, interfere with, and fuse with each other to create one rhythm. Living in that rhythm, we may seem to be forgetting and have lost the various other rhythms encountered to create our rhythm, but I believe in the possibility that multiple, non-homogeneous rhythms live within each person. That may be why many people empathize with jazz, which is a fusion of indigenous rhythms from various areas, and Tokyo inhabitants are soothed by the Okinawan sanshin music. In other words, you can say that one person, an individual, is an aggregate resulting from immeasurably complicated processes. In fact, at its most extreme, you can say that the processes of the entire universe are involved in that – and live on in a single human form for about 100 years. Humans are very intricate and complex, and that is a very important fact, because it means that there is another connection between people aside from nationality or languages they speak. Therefore, being entrenched in a single established rhythm that subconsciously binds us can make us fall into an occlusion, preventing further progress.

In 2018, Meiji University is opening a philosophy course. While there are voices questioning why we should have more philosophy now, it is easily answered by considering the difference between philosophy and psychology and sociology. Psychology stands on the premise that there is a mind. You think about how a mind should be in pursuit of its ideal form. In philosophy, I think, mind is not a being, but made into being. We think that the mind forms and develops when people talk to, look at, and touch each other, on each and every occasion, and not something that already exists. Same goes for society: philosophy does not take society for granted, but perceives it as only arising when people encounter each other, gather, and co-exist. There is no premise.

I think the world is an archipelago, a cradle of the deep studded with islands of varied shapes and sizes. No one island is the same as another – they constantly change by moving, getting closer or farther away, or sinking or floating. There is no solid continent. There is no existence in the beginning, but they arise in the course of constant change. Supposing the world as an archipelago, when you realize that the existing continent that you thought was solid ground is actually a fallacy, we are overwhelmed by a sensation like drifting in the ocean. I consider philosophical practice to be the exercise of sensitivity and pathos to change this uncertainty into something with humor. This also becomes a channel for exchanging different rhythms. In the center while at the periphery – such a study of philosophy is what we propose to the current drifters in the archipelago and what we aim for with the new course.

* The information contained herein is current as of March 2018.
* The contents of articles on Meiji.net are based on the personal ideas and opinions of the author and do not indicate the official opinion of Meiji University.