For future rural communities where women can be more active

These days, women active in the field of agriculture have been a hot topic with the development of agriculture into the sixth industry as well as promotion of the "Agri-women Project." While it is said that the concept of agriculture as an industry has been reviewed, the population of young women in rural communities is continuously decreasing. What problems lie behind this phenomenon?

Agricultural policies that have aimed at support for women

Now, we often see expressions like “agri-girls,” “agri-gals,” and “agri-women” in newspapers or other media which feature women active in agriculture or in the sixth industry developed from agriculture. Also, the Ministry of Agriculture, Forestry and Fisheries is promoting the “Agri-women Project” to develop new services by making use of three kinds of strength owned by agri-women, “productivity,” “knowledge,” and “market impact,” in collaboration with companies and organizations. By publicizing active lives of female farmers, the project is intended to increase young women who choose agriculture as their career. Moreover, there are movements to review agriculture and rural communities mainly among the young generation. These movements may include an increasing trend of urban people to return to a rural life. If these movements expand and the agricultural and rural population increases, future rural communities will be secured.

However, the reality is not that easy. Before the implementation of the “Agri-women Project,” the Ministry of Agriculture, Forestry and Fisheries had long been working on policies for rural women. The first policy was the introduction of agricultural development and extension services in 1948, almost 70 years ago. This policy aimed at the development of agriculture and the improvement of rural life. Initially, it mainly focused on the improvement of food, clothing, and housing. However, to meet the demands of the times, the targets of improvement were expanded to household management, elderly people, community development, and so on. We can say that these are policies for rural women from the perspective of life.

Although these policies delivered great results, rural women faced a new problem, a gender problem in agriculture and rural communities. Once they stepped out of their daily lives, they found themselves in a male-centered society. At that time, a new movement, which bore fruit in the form of the Basic Act for Gender Equal Society (1999), emerged in the world, including Japan. Accordingly, the Ministry of Agriculture, Forestry and Fisheries launched policies to improve the social status of rural women around 1990.

Women account for about half of the total agricultural workforce, and play important roles as farmers. Nonetheless, women’s social status was still low in the real world. Their opinions were not accepted in farm management, and they did not have enough money at their disposal. Therefore, new programs, such as introduction of “Family Management Agreement,” to support entrepreneurial activities of rural women and promote women’s participation in society, were initiated. Through these policies and efforts, the Ministry of Agriculture, Forestry and Fisheries aimed to provide assistance for female farmers and improve their social status.

We can say that these policies are based on the perspective of human rights. Article 1 (Purpose) of the Basic Act for Gender Equal Society stipulates “realizing an affluent and dynamic society in which the human rights of both men and women are respected.”

In contrast, the recent “Agri-women Project” initiative has been promoted from the perspective of industry. That is to say, these policies are intended to position women as important actors in the industry of agriculture. In this way, the Ministry of Agriculture, Forestry and Fisheries has implemented various policies for rural women according to the times from the perspectives of life, human rights, and industry.

However, the number of new female farmers is not necessarily increasing. Among new farmers in 2016, only 24.4% were female. Female farmers account for more than half of farmers aged 50 to 64, but the number of new young female farmers is very small. In addition, decrease of young women in rural communities would involve regional development. The report issued by the Depopulation Problem Study Panel of the Japan Policy Council in May 2014 pointed out the vanishing rural areas based on the decrease in the population of women aged from 20 to 39. Aside from its actual validity, the report highlighted the concern that the unattractiveness of communities and their main industry agriculture would cause young women to move out of the communities. In addition to the policies to support existing female farmers by promoting the “Agri-women Project” as introduced earlier, the Ministry of Agriculture, Forestry and Fisheries started implementing policies to increase new young female farmers.

Let me introduce a newspaper article. In an area where lettuce cultivation is flourishing, each family of lettuce farmers has annual sales of approximately 30 million yen, and luxurious houses, called “lettuce palaces,” line the street. However, the population of the area is decreasing. More and more women have left the area for cities never to return, and there are few female incomers. Why does this happen? One of women who moved here from another area said, “If I got dressed up or tried something new, people would talk about me behind my back. So, I have always tried to keep a low profile.” It is hard for women to live in an area bound by old male-centered practices and conventions even if the area is financially successful with the vitalization of agriculture. If an area is developed only from the perspectives of economy and industry, it will not necessarily become attractive to women.

To develop attractive agriculture and communities 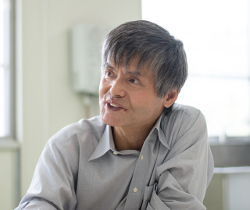 Then, what should we do to change these rural communities? Actually, some aspects are changing internally. For example, a daughter of a farming family, who worked for a company in a city, decided to return to her home to take over her family’s business as a farmer, and established an agricultural corporation. There are also some successful cases in business, such as processors of agricultural products and restaurants. In these cases, communities and local men have come into operation centering on the successful women.

However, these women are very rare. What is needed to have more women like them?

One of the keywords is “future rural women.” The conventional policies for women based on the perspectives of life and human rights are intended for women who already live in rural communities. Their purposes are to improve their life with the family or community and raise their social status. “Present rural women” were the target of these policies.

The ongoing “Agri-women Project” initiative conveys a message that active women are driving rural communities forward. The project tells “future rural women” outside of the communities that these are where women can play active roles. Of course, the purposes of the project include encouraging young “present rural women” who are working hard on their own, and helping them find friends through the network. “Agri-women Project” is a policy for both “present rural women” and “future rural women.”

Another keyword is diversity, or diversity of residents. In particular, women’s ways of living and lifestyles have become diversified. Before moving to the rural communities where they live, these women had various experiences, such as careers unrelated to agriculture, urban life, and overseas experiences. Surely, “future rural women” will have experienced more various ways of living than “present rural women.” Policies to accept, respect, and promote diversity to generate synergy are anticipated.

In consideration of these new circumstances, new policies should comprehensively incorporate the policies that have been implemented so far from the perspectives of life, human rights, and industry. We have already gotten all the hints for being chosen as a “place where women want to live.” The issue for now is whether to put them into practice.

Recently, a growing number of urban people are interested in agriculture and rural communities. They are candidates for “future rural women.” If you are a university student in the agricultural department, you can take rural training. If you are a working adult, there are many opportunities for you to get involved in rural areas or get a hands-on experience of a rural life. If you try them, you will be able to actually feel and check if the rural community allows women to be active in the society. Also, if you are a “present rural woman,” I would like you to show how you are playing an active role. Communities should become a “place where women want to live” for both “present rural women” and “future rural women.”

As a final note, if you are a “present rural man,” you should have a strong sense of crisis. You should ask yourself if it would be fine for you to keep being unpopular among “future rural women.”

* The information contained herein is current as of September 2017.
* The contents of articles on M’s Opinion are based on the personal ideas and opinions of the author and do not indicate the official opinion of Meiji University.