A new technology to detect cancer economically and accurately by the use of nematodes is attracting much attention. Few people have heard of nematodes, but they are known to possess various abilities, many of which appear to be beneficial to humans. Knowledge on arsenic-resistant nematodes accumulated by a research group from our university has become a focus of attention recently. 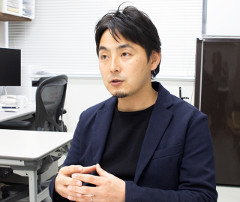 Nematodes are multicellular like humans are, and they are invertebrates. The body is basically tubular and generally around 1 millimeter in length, though some are as long as a few meters. Most are transparent and mostly invisible to the naked eye.

One major characteristic is their abundance. In a microscopic observation, it is not unusual to find thousands of nematodes in a handful of earth.

In addition, nematodes have been found aplenty also in waters and seas, and even in permafrost, deep sea and other so-called extreme environments. In fact, nematodes are believed to be the most populous species on Earth.

Another major characteristic is their diversity. So far, some 20,000 different species of nematodes have been identified, but they are believed to represent less than 1% of all the nematodes living on Earth.

Some readers may associate nematodes with parasites because of Anisakis, Enterobius (pinworm) and filaria. In reality, however, only about one in four nematode species are parasitic to animals or plants. About 75% are free-living.

Most of them live on microorganisms and algae, and some are predacious, feeding on other nematodes. Nematodes that live in soil are considered to be playing the role of decomposer in the ecological circulation of materials. The ecology of nematodes is very rich in diversity.

This diverse ecology has barely been brought to light because the history of nematode studies is still too short.

Put differently, big possibilities exist for the application of nematode studies, as the numerous studies on insects and microorganisms have led to the development of useful technologies based on the outcomes of such research.

A recently reported example of such possibilities is the use of nematodes in the examination of cancer. The testing is based on the sense of smell that nematodes have for cancer cells.

For a long time, nematodes were thought to be a primitive creature, having appeared at an early evolutionary stage of living organisms on Earth.

In recent years, however, the advancement of molecular biology and other sciences used for looking at genomes has revealed that nematodes are relatively akin to insects, phylogenetically speaking. Furthermore, nematodes are not as primitive as they are commonly perceived to be.

For instance, nematodes have nerves like we humans do. The convergence of these nerves allows nematodes to have a primitive brain function.

In fact, nematodes have a learning ability and a remarkable sense of smell. In terms of the number of olfactory receptor genes, nematodes are said to be superior to dogs.

Accordingly, the news that nematodes respond to the odor of cancer cells was of little surprise to nematode researchers who are knowledgeable about their unique abilities.

There is hope that yet unknown abilities and functionalities of nematodes will be discovered in the future.

Our research team discovered certain arsenic-resistant nematodes, which we believe will lead to the unraveling of new abilities of nematodes.

Mono Lake in California, U.S. is famous for its high content of highly toxic arsenic in the water. Apart from the temporary stay of migratory birds, no creatures are said to live in this lake except for some microorganisms, algae, a shrimp species (brine shrimp) and a fly species (Ephydra hians).

However, our investigation confirmed the existence of eight different species of nematodes there, counting only the identifiable ones.

I am sure you are aware that arsenic is highly toxic because several poisoning incidents have occurred in Japan. So why can some creatures live in Mono Lake despite its high arsenic content?

In the case of Ephydra hians, known to be living only in Mono Lake, the alkali flies were found to have the ability to extend a membrane-like layer around their body to prevent the entry of arsenic into the body.

Then, what about nematodes? In the case of nematodes, arsenic does enter into the body. Therefore, there must be some system inside the nematode body that detoxifies arsenic.

Our research revealed that nematode species related to those isolated at Mono Lake are also resistant to arsenic.This begs the question of how they have acquired their resistance to high concentrations of arsenic.

We are looking at the relationship between nematodes and phosphorus.

Phosphorus is a major mineral, but it becomes toxic at high concentrations. As such, it is used in rodenticides and pesticides.

Phosphorus is contained richly in soil as well as in feces and other organic substrates. They provide a good habitat for nematodes.

We believe that this phosphorus-resistant mechanism must have been preadapted to arsenic.

The eight nematode species we isolated at Mono Lake have ecotypes that are different from each other. Phylogenetically, they cannot be thought to have branched out from any one ancestral species that might have encroached into Mono Lake.

In addition, even though the high concentration of arsenic in Mono Lake has been reached through a gradual buildup of arsenic over a long period of time, the history of arsenic concentrations so extreme as to keep away most living organisms is far too short for any creature to acquire a new trait through adaptation to such an extreme environment.

The successful acquisition of arsenic-resistant traits by so many different species of nematodes in such a short time suggests that they must have preadapted the abilities that they already possessed.

Gaining clues from nematodes to solve our own problems 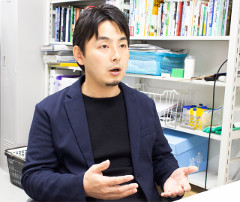 The application of a trait of a creature for a different function or role during evolution is called preadaptation.

The nematodes in Mono Lake can be described as having preadapted to the new environment by applying their previously acquired traits.

Moreover, some nematode species are known to have the horizontal gene transfer function by depriving some genes or genome regions of other organisms and pass the genes on to the offspring.

Nematodes also have high phenotypic plasticity, that is, the ability to alter their ecotype and traits according to the living environment. For example, they can live for a long time with no feeding at all in an extremely dry environment.

To cite just one example, the nematode genes that are responsible for arsenic metabolism are believed to resemble those of human genes.

In some parts of the world, people suffer from arsenic poisoning because their drinking water is contaminated by arsenic from nature.

Elucidation of the arsenic resistance mechanism of nematodes may lead to the development of some detoxifying agent or food for the benefit of such population or to the detoxification of the local environment by the release of nematodes over the land.

I think we can learn a lot by studying nematodes in more depth and gaining clues to help find solutions to our own problems.

At the same time, it is a fact that parasitic nematodes are causing heavy damage to agricultural crops.

Because of the traits and abilities that I have described, nematodes develop resistance to a nematocide rather quickly. It is almost like a game of cat and mouse with the development of new nematocides.

The objectives of our research on nematode mechanisms are two-fold: exploring clues for our own problem-solving and preventing agricultural damage.

I hope that the readers will appreciate the vast possibilities that nematodes offer and will accord stronger interest and attention to new media reports about nematodes. The interest you demonstrate will provide great momentum to our research. The scientific level of a country can be raised to a higher level only by its people.