The tendency toward nationalism has grown stronger throughout the world, including in the United States. The importance of international education to curb this tendency has been re-acknowledged. Study abroad programs, a part of an international education, however, has been on an annual downward trend in Japan. I think some measures are required to deal with this trend. 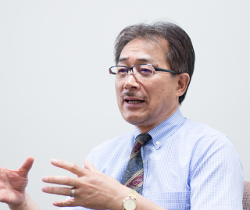 As seen in the Trump Administration’s “America First,” conservative nationalism has been gaining great power worldwide. This nationalistic bent is not only limited to governmental affairs. When looking around us, we see and hear about bullying and hate speech, and tragic news such as parricide and filicide. It appears the fundamental element of these issues is greatly affected by people’s introspective mindset. When people build a wall around themselves, and have little contact with the outside word, they become insensitive toward others. They cannot be tolerant or work together with others. The lack of sensitivity ends up exacerbating their egoistic behaviors. To deal with these problems, we tend to come up with some symptomatic treatment, such as admonishing or punishing bullies, and enforcing stricter laws against hate speech. However, I think, such measures can never really solve the problems. What is needed is to take comprehensive measures from a variety of positions. I think the most essential part of such measures is education. It is particularly important to incorporate the field of “international education” into every education system.

Why international education? Education itself, in fact, is extremely inward-focused. The education provided in a given country deliberately guides its people in a certain direction. Of course, that is important. However, where people with different educational backgrounds encounter one another, a conflict occurs. Inherently, people only know the world in which they live. The world they know may be everything to them, but they were like a big fish in a little pond. In fact, their world is very narrow, and the world outside, with its diverse groups of people and cultures, is much larger than they have ever known. It is not until they go out into such a world that they understand their own culture appropriately. Therefore, it is necessary to incorporate the field of international education into all educational systems. UNESCO has already called for implementing the “Recommendation concerning Education for International Understanding, Co-operation and Peace and Education relating to Human Rights and Fundamental Freedoms” in 1974. Nevertheless, when looking at the current global trends more than 40 years later, it seems that not enough efforts toward this recommendation have been made in international communities.

Outcome of studying abroad is acquiring various abilities, not just the acquisition of language skills

International education involves various efforts. One of the most effective efforts may be studying abroad. Living and learning overseas helps you to sharpen your senses toward different cultures, as well as views that are different from your own, and polish your international perspective and cross-cultural understanding. Japanese people tend to think of studying abroad as something done for the purpose of learning the language. When I ask students what the purpose of studying abroad is, most of them respond that they want to master practical English. However, upon their return to Japan, few students talk about language skills. I have a student who participated in an internship program at Disney World in the United States for five months. The student worked as a Disney cast member and got paid for it. He worked closely with visitors from around the world, and his life was also challenged by other cast members from around the world. He was literally thrown into a multicultural melting pot. In this environment, he repeatedly experienced complete denial and approval of himself by others. When he returned to Japan, he was a completely changed person. He became more self-motivated, his presentation skill improved dramatically, and these attributes were remarkably evident in his job hunting endeavors. He was never nervous during his job interviews; he presented himself eloquently based on his rich experience. I heard that he was even told to quiet down during his group interview session. Such a marked improvement in self-motivation and communication skills is the outcome of studying abroad, and language skills should come along naturally. According to a survey by KEIDANREN, or Japan Business Federation, an experience in studying abroad is almost the least requirement of a new employee. Considering this fact, it appears that studying abroad does not help very much in getting a job. However, “communication skills” and “self-motivation” are listed as among the most necessary requirements. In other words, your experience studying abroad cannot be your selling point, but the skills acquired through such an experience are considered valuable. In fact, many students with study abroad experience have received multiple job offers from prestigious companies. 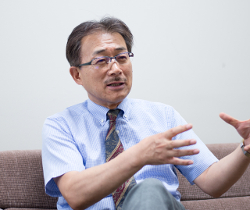 It is apparent to many of those who have experienced studying abroad that living in a different culture helps gain understanding for and sharpen senses toward cross-culture, and helps with the acquisition of a variety of skills. However, those without such experience cannot get over the idea that studying abroad is just for improving language skills, and therefore, they hesitate to take the first step toward studying abroad, especially when they want to find employment in Japan after they graduate. According to the results of a survey by the Organisation for Economic Co-operation and Development (OECD), the number of Japanese students studying abroad is on a declining trend. There are several reasons for this, but the main reason is financial. For example, Meiji University’s School of Global Japanese Studies offers programs to study at prestigious schools in England, but some programs cost a student 700,000 to 800,000 yen a month. At one time, there were students interested in these programs, but currently there are hardly any prospective students in light of cost effectiveness. For this reason, some of these programs have now been stopped. In general, it is hard for Japanese students to have a strong desire to go overseas to study from a socially advantaged and convenient country like Japan, especially if doing so is beyond their means. This kind of attitude could lead to nationalism or exclusivism in the long run.

With that, Meiji University is promoting study abroad programs in an effort to reduce the financial burden on students. A large-scale international education conference, with participation by personnel in charge of international education from educational institutions of over 100 countries, was held in the United States this year. We negotiated with more than 50 colleges to start study abroad programs with the lowest possible cost. Among such programs, there is a tie-up program with a state university in America, which is offered with a cost for tuition and living expenses of about 1 million yen per year. We also offer a variety of a week-long to month-long short-term programs. As a first step, we want students to go overseas to learn and experience different cultures in whatever form the program may take. I believe such experiences will eventually find their own purposes through a variety of discoveries. As just described, studying abroad needs a certain structure that can be followed. Our ideal is to provide diverse programs to match each student’s purpose. However, this cannot be done by the university alone; international education requires a systematic structure that starts during early childhood.

English will be a mandatory subject for third graders and up starting in 2020. I hope this effort will not end up being just language education, but rather will incorporate elements of international education. Small children rarely have a strong sense of prejudice. As they advance through their education, socialization begins and prejudice or exclusivity springs up in their minds. The stronger such a sense becomes, the harder re-education becomes. Although globalism appears stagnant currently, it will continue to play a fundamental role in the international community. In such a community, an international mindset or sensitivity to different cultures, serves as the infrastructure (solid bedrock) for living. I think it is the responsibility of educators, as well as public administration, to build a systematic international education structure that incorporates international education views during early childhood, and provides a higher level of education at university that is based on such views.