The mystery of wanting to distinguish between male and female

These days, we increasingly more often come across expressions like LGBT and gender identity disorder in the media. Although it seems as if understanding of sexual diversity is improving, on the other hand, there has been an incident where a congressional representative made a homophobic comment. This is probably because misunderstanding and prejudice of gender/sexual diversity are still present at the base of society. We interviewed Associate Professor Shoko Sasaki, who studies clinical psychology. 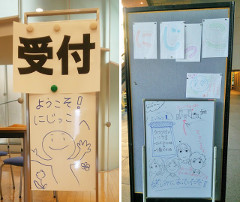 Co-hosting “Nijikko,” a meetup event for children under 15 years old who might be LGBT, and their guardians

While I provide gender-related counseling from a point of view of clinical psychology, I have come across an elementary school pupil who told me “I want to die.”

When a boy wants to wear a skirt, or if he likes cute things, it is common that other children make fun of him saying “You are sissy” or “fag”.

The children who make fun of him do not actually see these words as cruel. They probably just notice someone who looks different or behaves differently from the others, then use the word “fag” to point that out, or say “You are sissy” just to chaff him about his difference. Or they often repeatedly ask “Are you a boy? Or a girl? Which is it?” with a wondering look.

However, this is tormenting for the child on the receiving end. They are surprised to be seen dismissively when they just wear what they want to wear or carry what they like to carry, and get confused and anxious wondering if there is something wrong with them or they are making mistakes. And they also feel more pressured into choosing between male or female.

Why do these things happen? Once humans are born, they learn all sorts of things from their surroundings, which include not only their guardians but also many different adults outside the home, as well as TV and games. Above all, their knowledge about gender related subjects expands progressively, without any special education but with indirect observation.

Children at the age of about five are said to have a very rigid understanding, which is to say binary thinking, such as the idea that boys and girls have certain distinct characteristics. This is because it is hard for them to acknowledge complexity, as their brains are still developing. It is so much easier for them to understand binary classification such as right or left, ○ or ×, and black or white.

Once the link along gender lines such as that boys wear trousers and girls wear skirts has been established, anything that deviates from that framework is seen as being strange or odd. On top of that, they see it as something that they can laugh at or be disgusted about, because they have learned it from observing adults doing just that.

It is very natural for boys to refuse to use something pink when they share a polarized idea that pink things are for girls. They do not want others to laugh at them. Restrictions such as “men should be like this” already start affecting us from when we are very young.

Should we adults overlook this situation of children, saying that they are only young, or that there is no need to worry since they will improve their cognitive abilities as they grow up and stop having polarized ideas then understand diversity?

Indeed, children may not mean any harm by making fun of the one who is different. However, that makes it even more important to question them properly.

I believe education has a major role to play in changing society. Some teachers are already exercising their ingenuity in the classrooms. While the outcome of education may not be produced overnight, it is very important to build up education to face diversity.

Not limited to school education, to objectively educate children who will bear the next generation, I believe that it is also necessary for we members of society to reconsider our own behaviors.

For example, you might have an experience where you said something to liven up the atmosphere at work, then others took it as a sexist comment. This kind of thing is not always easy to recognize yourself, and even if you do, you might feel like justifying yourself, as it is not nice to be fingered as an offender. Despite my research theme, I actually am not totally confident that all my words and deeds are perfectly fair. Rather than shrugging it off, I think it is necessary to review my own language and behavior.

On hearing the word LGBT, some might feel that it has little to do with them. But if you start thinking it over, you will see how strange it was that you have so far been categorizing things into male or female without any suspicion.

If you have never had any doubt about being male, why not reflect on yourself. Isn’t there a male boss or a senior male colleague you admire? Have you ever wondered what is masculinity in you? “Being male without any margin of doubt” is quite a fictional situation.

By delving into your own sexuality, you can discover the diversity within yourself and realize your inner depth. I guess you will also be able to empathically accept the diversity of others.

Gender/sexual diversity exists not just because of the presence of sexual minorities, but also because those who see themselves as sexual majorities individually have unique sexuality to start with.

As I mentioned earlier, when they are made fun of about their gender identity, some children feel more pressured into choosing between male or female.

In some countries, this idea of “having to choose between male or female” has formally been denied. For example, in countries including New Zealand, Australia, the Netherlands, Canada, India, and Nepal, they have provided gender sections for genders other than male or female on formal documents such as passports. In Japan, those who do not specify themselves as either male or female are called “X-gender”, and some people identify themselves as one who belongs to that category. Some local governments in Japan have finally started to omit gender sections from their formal documents where gender identification is not required. However, no local government so far has provided a gender section specifically for X-gender.

In the society and systems that have been forcibly bisecting things that cannot be divided into two, strains are emerging as a result. I believe that it is necessary to accept the fact that gender identity is complicated, and adopt institutional designs based on such awareness, rather than being stuck with the primitive and simple-to-understand recognition of bisection.