In recent years, various industries have developed services that take advantage of virtual reality (VR) technology, allowing a variety of digital environments to be experienced realistically from our very own rooms. One of the research areas supporting the development of this VR is cognitive neuroscience. Research to elucidate the information processing of the brain will go much beyond VR and lead to a further elucidation of human sociality and the nature of humans themselves.

‘Body’ is the keyword of the Cognitive Neuroscience Laboratory 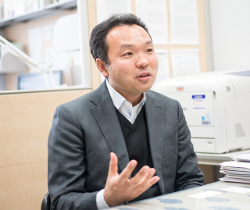 Cognitive science is a discipline that studies how humans process various inputs such as visual and tactile senses to shape their thinking and actions. This involves a variety of disciplines from psychology and philosophy to linguistics, cultural anthropology, information science, computer science, and AI (Artificial Intelligence). Among them is also cognitive neuroscience, a discipline that tries to understand humans in terms of brain information processing.

Many people may think that research on the brain focuses on thinking and consciousness, but in my Cognitive Neuroscience Laboratory, the big keyword for research themes is actually “body.” Information coming into the brain originates from what the body senses, and after such information is processed by the brain, instructions to act on the environment will be given to the body. In that sense, the body is indispensable for brain activities; but what is more, the body is heavily involved in how the brain recognizes the environment and makes decisions. In the case of a computer, inputting the same information results in the same response. In the case of a human, however, responses (that is, decisions by the brain) to the same information vary depending on whether the person is, for example, in good or poor health. In addition, the way the environment is recognized differs between early childhood when the body size is small and young adulthood when it is large. Therefore, the body of a human is different from a simple input device in a computer and is considered to be deeply embedded in the function of the brain. Recognition in the brain is based on not only perceptual information but also the information of bodily movements, which are actions on the environment; thus, we can say recognition in the brain and bodily movements form a loop structure.

Illusion of the self-body image in the brain

Our brain is considered to contain some sort of images about our own body. For examining the mechanism that forms those images, there is an experiment called “rubber hand illusion.” First, one of the subject’s hands and a rubber mannequin-like hand are placed side by side in such a way that the subject cannot see his/her own hand. In this condition, the same area on the real hand and the rubber hand is touched simultaneously with brushes or other tools. Even while being aware that the rubber hand is fake, the subject gradually begins to feel as if the rubber hand is his/her own. This illusion is a phenomenon that results from the coincidence of visual and tactile senses. It was found that if the timing in which both hands are touched is changed, even as slightly as 300 milliseconds (approx. 1/3 of a second), this illusion was not likely to occur. Visual information is sent to the occipital lobe of the brain, and tactile information is sent to the parietal lobe. After that, these input signals will meet inside the brain. In this time, if the time lag is less than 300 milliseconds, the brain ignores it and determines that the visual and tactile information are coincident. This means that the brain has a mechanism that forms the self-body image, which is maintained even if there is a certain amount of time lag in information perceived by the five senses. This function of the brain can be applied, for example, as follows: when you control your character in VR using data gloves and a head-mounted display, it is possible to calculate the allowable range of time lag between your motion and the character’s motion. If the brain’s activities and information processing during this time are revealed in near future, it will eventually become possible to improve brain-machine interface technology that allows machines to be controlled according to instructions from the brain. This will find applications in medical and welfare fields, such as moving a prosthetic limb at will and moving a wheelchair freely.

The mirror neuron system has enhanced the sociality of humans 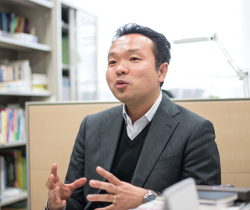 A further interesting thing about the relationship between the brain and body is that the brain has an area called the “mirror neuron system.” When you exercise, the motor area of your brain works. However, it also works when you are simply watching other people exercise even without actually engaging in the activity yourself. This suggests that the human brain engages in simulation simply by watching the motions of other people. It is thought that one of the reasons that this simulation might occur is because humans have a latent desire to understand one another, and as such, simulation occurs in order to speed up the facilitation of this process. Communications, a means to understand others, are generally considered to be verbal exchange of information. However, observation of the brain reveals that besides the exchange of verbal information at a high level, communication based on information processing of the body is also performed at a lower level. Such communication without words is called “non-verbal communication”, and some research even suggests that it is actually more important than verbal information. For example, seeing a friend feel sad about an unfortunate event can also makes us feel sad as well. This is a phenomenon called “empathy”, which is the identification of oneself with other people. This is also caused by the mirror neuron system. In this case, you are not trying to empathize consciously; instead, simulating the actions of other people automatically makes you feel a similar emotion. That is, empathy is generated when the boundaries between oneself and other people disappear due to resonance at the physical level, resulting in overlap with them in the brain. By dynamically switching between the states of overlapping with others and getting away from others, humans have enhanced their sociality.

In fact, non-human animals are also known to exhibit the effects of the mirror system in their brains well. A bird who imitates the chirping of a parent bird is an example of behavior due to the mirror system. However, humans do not just feel empathy from physical resonance based on the mirror system; we have also developed the ability to infer what other people’s feelings are (act of inference). This is called “mentalizing.” The phenomena of resonance and empathy take place automatically at the physical level, whereas with mentalizing, the mental state of other people is inferred consciously so that we can decide which actions we should take in response. Such a process is rarely found in other animals. Some experts say that humans have been able to construct complex societies in a way that other animals simply cannot because our brains have been developed for this mentalizing function. This idea is called the “social brain hypothesis.” For example, if we examine how primate brain size is related to the size of the group that they can form, we find a correlation between these two factors. Chimpanzees can form a group of dozens, but larger-brained humans can form groups of about 150 to 200 individuals, each of which can still belong to many different groups at other locations.

Communication on the Internet with the body left behind

Although the mirror neuron system is also exhibited in non-human animals, the reason that only humans have been able to construct highly advanced societies is the development of non-verbal communication through the mirror neuron system, and eventually a more advanced function of mentalizing, to deeply understand others. In that sense, the body is indispensably involved in the communication capability of the brain.

Initially, communication on the Internet was text-based such as through e-mails. Then, pictorial symbols and stamps were increasingly used, and in recent years have gradually shifted to the sharing of pictures and videos. This is not only because of the advancement of information and communication technology, but also because of the growing public awareness that there are some things that cannot be expressed with verbal communication that does not involve the bodily expression. Pictures and videos help to complement bodily expression. Even now, blog flaming and exchange of insults are likely to occur when the interaction is text-based and the anonymity of participants is high. With the advent of the internet society, which allows for easy communication with anyone, communication is initially thought to become denser and more expressively rich. In truth however, it has arguably become quite the opposite because such communication bypasses the unequivocal importance of the body, making it difficult to generate empathy based on resonance at the physical level; a point made clear from the perspective of cognitive neuroscience.