Disruption of the biological clock may ruin human beings!?

In recent years, we began to hear some new words, such as “chronotherapy,” “social jet lag,” and “body clock diet.” All of these words are created by taking account of the function of a body (biological) clock incorporated in our physiological functions. What kinds of roles does the biological clock play in our body? It seems that many things are still unrevealed.

Biological clocks are related to the survival of living organisms 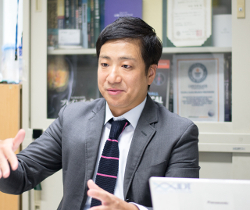 Biological clocks display a variety of types of rhythms, among them, a circadian (24-hour cycle) rhythm is the most popular one and actively studied in the world. It is well known that the circadian clock regulates various physiological functions in humans. For example, our body seeks to be active in the morning when the sun rises, and in contrast, seeks to rest in the evening when the sun sets; this is one of the functions of the biological clock. More specifically, during the day, humoral factors including hormones are secreted to encourage organs function necessary for activities to work dominantly in the body, and the temporal system is controlled by a nerve nucleus, named the suprachiasmatic nucleus, which is located in the hypothalamus of the brain. The suprachiasmatic nucleus sends circadian timing information throughout the body based on environmental information such as the light from the sun. Organs of the body begin to move by sensing the light in the morning; however, it is not only because the hypothalamus secretes hormones by responding to the light, but also because the suprachiasmatic nucleus recognizes the start of the day by sensing the light and sends the information throughout the body to make the organs work so that the body becomes active. In other words, the suprachiasmatic nucleus is a central clock, and the light has a role of telling the time to the clock and adjusting the clock’s hands.

What happens if the biological clock is disrupted? You may have experienced jet lag when you traveled abroad. This is a health problem, and it occurs since your clock cannot adapt immediately to the new lighting condition resulting from your travel. Some people say that they have never experienced jet lag; however, this may not be a good thing since maybe it is because their clocks are broken.

Almost all the organisms living on the Earth have a biological clock, which beats out a steady rhythm. There are organisms that notably demonstrate a circadian rhythm like humans, and others that show reproductive activities according to the monthly rhythm, such as some kinds of marine organisms. Some fish species migrate with the annual rhythm. All organisms, ranging from plants to fungi, have biological clocks in their bodies. The biological clocks that they have obtained have a critical function for each organism to survive on the Earth. Humans have diurnal behavior, since it is suitable for their survival. Assume that you do an experiment in which you catch a wild rat and lesion the suprachiasmatic nucleus in the brain of the rat. This does not cause the rat to die immediately; however, it will die after returning to the wild since it cannot feed itself, or it may be attacked and eaten by another animal. Almost all the organisms that now live on the Earth have biological clocks. This means that those that did not have stable biological clocks have died out and disappeared from the Earth. However, people of today have begun a life that disrupts the biological clock by themselves.

Disrupting the biological clock leads to infertility or health problems

As electric lighting systems were developed, people began to act like they do in the daytime even late at night. However, this is not a human’s inherent lifestyle. Acting under bright light at late night or looking at the screen of a PC or smartphone in the dark makes your central clock misunderstand that the light is the sunlight of the day and disrupts your clock. Fortunately, people will not be attacked by a foreign enemy even though the biological clock is disrupted. However, it is known that such disruption can affect functions of the body. For example, many people feel tired on Mondays (the first day after the holidays); this is a phenomenon called “social jet lag.” As people go to bed late and sleep late on Saturdays and Sundays, the hands of a human’s clock go back, and people have symptoms like jet lag on Mondays. To avoid these symptoms, it is essential to keep the same life schedule as on Saturdays and Sundays. However, having jet lag is still not that big a deal. A result of an experiment shows that estrous cycles of female mice are disrupted or disappear because of the disrupted rhythm of the clock, and this results in infertility or a declining pregnancy rate. Similar phenomena have also occurred in humans. Research conducted in the United States reported that many female workers working night shifts have irregular menstrual cycles. Probably it is because their clocks are disrupted. In the above experiment using mice, their estrous cycle and pregnancy rate became normal after returning their life schedule to one suitable for them. We are continuing the study to confirm whether or not the same holds true for people.

It is also known that disrupting the biological clock may predispose people to certain diseases. If, due to the disrupted clock, the hormones to raise your blood pressure are not secreted sufficiently in the morning after you wake up, the difference between your blood pressure in the day and night disappears. As a result, your risk of heart disease and cerebrovascular diseases increases, and you may develop cerebral infraction or myocardial infarction. Considering the increased risk of having disorders and diseases, you may understand the importance of spending a regular lifestyle so as not to disrupt your clock. 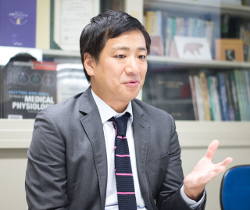 Studies on biological clocks advanced dramatically about 20 years ago thanks to the discovery of the mammalian clock genes. It was revealed that the mechanism of the biological clock in mammals is maintained not only by the suprachiasmatic nucleus but also by clock genes in the cells of the body that beat out a circadian rhythm. In other words, the suprachiasmatic nucleus is the central clock, and integrates the cellular clocks in the body.

With the finding that clock genes sit in cells all over the body, the application to various studies has been advanced. For example, we now study the differentiation of domestic animals’ adipocytes. This study is based on a study that revealed that the direct approach of clock genes in cells to fat metabolism genes can promote or suppress fat metabolism. In plain words, you may be prone to put on weight or lose weight depending on the rhythm of clock genes. The study also introduced some topics about our daily lives; for example, people’s real awareness that eating at night causes one to put on weight easily, and a diet program that gives care to the meal time. All of these are related to the expressions of clock genes. By firmly understanding the mechanism of clock genes and applying it to farming, livestock can be fattened up more efficiently with the same quantity of feed as they current take. In recent years, gene manipulation has been utilizing as a practical solution to food problems, but there is a fear for food safety. The method applying the mechanism of the biological clock is safe and more natural.

In the medical field, practical use of chronotherapy has been starting. For example, in cancer treatment, administering a strong anti-cancer drug is an effective treatment for attacking cancer cells. However, the stronger an anti-cancer drug, the larger the side effect on healthy cells. In order to attack cancer cells effectively while minimizing the side effects on healthy cells, it is necessary to administer the drug in the hours when the activity of healthy cells is lower; for example, when you are sleeping. It is expected that further investigation and application of the mechanism of biological clocks will lead to the development of more effective treatments.

Once people discussed the idea of making Tokyo a city that never sleeps, and late-night bus services were operated for a period. Working 24 hours a day may be economically advantageous. However, it will be highly counterproductive if the system disrupts our biological clocks. It may cause health problems and raise medical expenses, or increase infertility and accelerate the declining birth rate. Similarly, when an argument occurred about introducing a daylight savings time (summer time) system in Japan, researchers who are the members of the Japan Society for Chronobiology or the Japanese Society of Sleep Research suggested that even if the difference is only a few hours, the system may disrupt our biological clocks. This opposition is one of the reasons why Japan’s government has not adopted a daylight savings time system.