The AE method, a non-destructive testing technique to encourage objects to say, “Ouch!”

Recently, a lot of attention has been paid to the deterioration of infrastructure facilities due to aging. However, it is reported that there are delay of inspection and checks and omissions in them owing to a shortage of inspection personnel and associated costs. Thus, there has been a focus on non-destructive testing techniques that enables us to check the inside condition of objects to be inspected without breaking them. 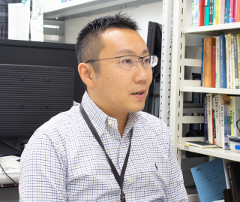 Nothing can escape from deterioration due to aging once it is manufactured and starts running. An inspection is absolutely necessary to continue to use things safely. If you neglect, it could lead to a serious accident.

Still fresh in our minds is the Sasago Tunnel Ceiling Collapse on the Chuo Expressway in 2012, killing nine people. The causes of the accident were identified as the deterioration of metal fittings suspending ceiling panels and their anchor bolts due to aging.

Furthermore, in 2017, a crack was found on an undercarriage of a running Shinkansen bullet train. In this case, the train crew noticed an unusual behavior and stopped the train, avoiding a serious accident. It could have been a catastrophic accident if it had been too late to take the action because there were about 1,000 passengers on board. It was believed that there was an omission by inspection personnel.

In Japan, there has been the so-called “myth of safety” regarding industrial products and structures. This myth of safety has been attributable to the high safety standards and to high-level technical capabilities that can satisfy the required standards. However, we should not forget that it was attributable in addition to highly skilled inspection personnel.

For example, seasoned inspection personnel who conducted an inspection visually and acoustically, tapping an object to be inspected with a hammer, had wisdom and experience like those of craftsmen. They were able to accurately find abnormal parts, which made a quick repair possible. The Japanese “myth of safety” regarding industrial products and structures was supported by such inspection personnel.

Therefore, since inspection and condition monitoring of infrastructure facilities, etc., are absolutely necessary and shortage of inspection personnel has worsened, the system for early detection of abnormalities is required.

To cope with these situations, we are studying non-destructive testing techniques that can detect abnormalities highly precisely while minimizing the required human resources and associated costs.

The AE method, a non-destructive testing technique to analyze the sounds emitted from an object to detect its “Ouch!”

Simply put, non-destructive testing techniques are the technical means to inspect the inside of objects without breaking them.

If you are elderly, you might be used to tap a watermelon to examine if it had firm flesh before you buy a watermelon at a grocery store because you could not cut it there. Non-destructive testing is a test like this.

By using non-destructive testing, we examine what is going on inside of infrastructure facility, etc., in operation without breaking or cutting the materials.

Actually, objects generate a sound when they are damaged or due to the damage. The AE method is a technique to detect and analyze the sound.

For example, seismometers installed at various places operate on a similar principle. Such damage as breaks and/or displacements at the boundaries of plates underground generates vibrations. Seismometers detect the vibrations to show their magnitude as well as distance from the epicenter.

Likewise, in the AE method, sensors are mounted on the walls of a structure or on various parts of a facility to pick up sounds emitted from the material and analyze them to see if they originate from damage on the material and where the sounds originate.

Like the hammering test by inspection personnel, techniques to detect abnormalities in an object by making use of sound have been used since a long time ago.

However, even if sounds are picked up, it sometimes has taken some tens of hours to analyze the sounds to determine whether each of the sounds is generated by a damage and, if the sound shows a damage, how severe the damage is. It is because, for example, a recent sensor picks up as many as several tens of thousands of sounds from objects when conducting an experiment in a laboratory.

Although, since there are a lot of sounds whose frequencies are too high to be audible to humans, we hardly notice in our daily life, objects around us are emitting a lot of different sounds. Analyzing each of the sounds has been a daunting task.

Thanks to recent advancement in computer and AI technologies, it has become possible to process a huge amount of data, which has enabled us to analyze sounds in a short period of time.

In other words, we are now able to recognize such sounds generated by a breaking object as “Ouch!” of the object.

In addition, it has become possible to easily tell if the “Ouch!” indicates a pain like a toothache in the early phase of a cavity, the severe pain of a bone fracture, or an unbearably severe pain that is close to a limit.

The AE method has already been put to practical use in a variety of fields. It has been applied to concrete parts of infrastructure facilities for example, and especially in large facilities such as plants, power generation facilities, and oil storage tanks.

It is painstaking for inspection personnel to inspect every corner of large facilities but if sensors are mounted on various parts, continuous monitoring becomes possible, which allows intensive inspection around the parts where abnormal sounds are detected. This should result in efficient inspections and compensate for the shortage of inspection personnel.

Let’s say, when you visit hospital, you may complain that you have a pain in the base of your thumb or a sharp pain in your stomach. This is done in order to ask a doctor to quickly check the location you feel something not right and to receive the necessary medical treatment.

Likewise, the AE method is a non-destructive testing technique to encourage objects to complain, “This part is aching,” in order to inspect and repair the damaged part quickly and accurately.

Timing of repairs can also be identified by the AE method 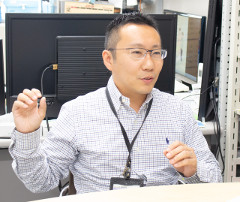 One of challenges for the future is cost. When considering detecting the “Ouch!” of an object accurately and identifying the aching part more accurately, the more the number of sensors mounted, the more the precision.

However, the more sensors are required, the higher the cost. Sensors come in various sizes and shapes like calumny cubic shapes in about a coin size and the price of expensive ones can be around 30,000 to 40,000 JPY.

Therefore, our laboratory is now working on a study using optical fibers to develop a sensor, which should be less expensive and more precise.

Light passing through an optical fiber is modulated by vibrations of sounds and our sensor makes good use of this characteristic.

Typical optical fiber cables you can see are composed of multiple fiber cores bundled within the protective sheath, whereas we are using in our study the bare optical fiber whose diameter is approximately 0.2 mm. If this is used, the optical fiber to make one sensor can be purchased for several thousand yen.

We were once asked to assist with inspections of gas pipe lines running along a bridge. We intend to develop sensors to pick up sounds highly precisely, which can be wrapped around those pipe lines for example or attached to wall surfaces, where the optical fibers are extended along them.

We are also studying the application of IoT technologies to the AE method. Presently, sensors are connected to measurement instruments and the data outputted from the instruments are analyzed using individual computers. We are planning to transfer the outputted data to a central control computer in order to analyze them collectively.

Provided with this system, inspection personnel can be located in the central control room during normal times, and in case of a warning, an abnormal sound from 83 m west of a pipe line running on the XX bridge for example, they can immediately be dispatched to the scene.

Furthermore, if wireless LAN is used, power transmission facilities, which are located deep in mountains and difficult for inspection personnel to access, can also be monitored continuously.

I believe the AE method in non-destructive testing will be introduced in a lot of facilities, so that we can keep using facilities as long as and as safe as possible.

However, be aware that not all abnormal sounds necessitate immediate repair work.

In the first place, no structure can be made unbreakable, even if it is built highly precisely to meet the highest safety standards. No facility also can escape from deterioration due to aging even if it is operated properly. Therefore, structures sometimes have an “Itchy,” sigh.

Now you may understand that we cannot totally believe in the myth of safety and cannot have excessive expectations regarding the safety.

As previously mentioned, a challenge for us, researchers, has been to analyze the sound generated from objects, if it indicates a pain, a moderate discomfort like an “Itchy,” or an unbearably severe pain. Now we can discriminate the degrees of pains and identify when to repair the facility.

We, as researchers, will try to disseminate this sort of information regarding technologies, and hope you can deepen your understanding.

* The information contained herein is current as of December 2018.
* The contents of articles on Meiji.net are based on the personal ideas and opinions of the author and do not indicate the official opinion of Meiji University.