Gene recombination and genome editing have been covered more often by the media recently. While the pros and cons of such technologies are sometimes discussed, the overall mechanisms of genes and life itself are not fully understood at present. This allows those technologies to serve as only borrowed wisdom and to fail to really contribute to humanity. 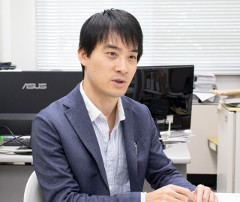 In March this year, a research subcommittee of the Ministry of Health, Labour and Welfare accepted a report that food not including nucleic acid processed out of a cell is not subject to safety assessment, separating food produced by genome editing from that produced by gene recombination technology.

I think many people felt anxious at the news. I also think not many people understand what the difference is between gene recombination and genome editing. This may be the reason for the anxiety.
The word gene means a part of biological genetic information and a genome means the generic biological genetic information. The gene recombination technique transduces foreign genes and the genome editing technique modifies a target gene as desired.

Though this happens in the laws of nature, gene recombination and genome editing aim to artificially modify genetic information to create an organism with a trait as desired.

If you want a sweeter or a bigger crop, or want to increase the amount of harvest, gene recombination technology enables the finding of a candidate gene out of organisms other than the crop to meet your requirement, transducing the gene into the crop or recombining a gene of the crop with the gene.

Corn and soybean, whose genes have been recombined with a gene that is resistant to a specified pesticide, are available in practical use. Spraying with a large amount of pesticide does not kill the corn, but kills weeds around the field. This results in labor-saving and increased production efficiency.

Genome editing, on the other hand, aims to allow a desired trait to appear by artificially modifying a part of the gene instead of gene recombination. Imagine that genome editing modifies and edits a part of an original genome (generic gene information) rather than modifying genes between organisms.

Somebody who is anxious about such measures by the country may think that eating a crop with artificially processed genes may affect the body. But obviously a crop’s “gene” can never spread throughout the body just by eating it.

Without such concerns, is gene modification technology then not problematic at all? As a matter of fact, there comes a big problem after having created a desired object.

More specifically, weeds in the field of the corn resistant to a pesticide reportedly are no longer killed by the pesticide. Why does this happen? And why is this problematic?

For humans, gene recombination occurs as mentioned above during the association of an ovum and a sperm to create a new trait of the next generation.

Microorganisms, however, frequently exchange genes with each other and some of them even recombine genes themselves. They, in other words, do not wait for the next generation but rather, an existing individual itself acquires a new trait.

Microorganisms use that mechanism as a sort of survival strategy to acquire diversity to keep surviving, adapting to a wide range of circumstances. More specifically, when they exist under circumstances where it is easy for them to live, exchanging of genes is rare, leaving the recombination capability mostly unused. However, if the circumstance become tough to survive, they aggressively begin recombining their genes, using an obtained gene or recombining genes themselves to try to acquire genetic diversity.

The gene recombination mechanism in nature, in fact, causes the weeds to be resistant to pesticides.

For example, one virus may extract a gene from the pesticide-resistant corn artificially created and exchange the gene with other virus, and the gene is passed from a virus that infects weeds to weeds. The virus certainly does not intend to do so. That is one of the mechanisms by which viruses survive in nature.

Dissemination of the artificial modification of genes and genomes in nature makes us concerned about new problems. Overlooking such problems while utilizing the technology solely for creation of an organism with a desired trait, is very problematic indeed.

In other words, in the current situation, we cannot but say that our comprehension of the causal relationships of the whole environment has been lacking, including not only crops but also viruses, etc. Having looked at the problem in advance might not have led to the shortsighted measure of growing gene-recombined crops in the field in nature. 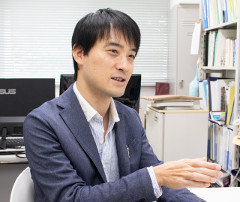 I think it is good and not problematic that humans carry out artificial gene recombination to produce convenient crops for themselves. What is problematic is to overlook possible events in the natural world overall for the sake of immediate profits.

A phenomenon involving a certain gene is local to just a small part of what is happening throughout the organism. However, genomes, the blueprint of organisms, are connected by a tremendously complicated network, and that phenomenon that took place in a part of the whole influences an unexpected part of the whole based on a causal relationship.

Modification of genes without understanding this is problematic. This is the case not only for gene recombination technology, but also genome editing. It has been recognized that genome editing with humans’ direct modification of an organism gene is safer than gene recombination that takes in genes from other organisms. However, effects on the whole due to the modification of the gene, which is a part of the whole, by humans through a wide range of causal relationships have not been exactly understood yet.

In rushing to respond to the demand for definite research results, researchers are now too preoccupied with only direct factors.

Basic research to understand the mechanisms of genes as a whole and their networks is very important as well as applied research.

This is not just to avoid risk. Modifying not only a direct factor A but also all factors allows us to produce bigger crops and increase the number of individuals as well if clarifying of the whole mechanism indicates involvement of other factors B, C or D.

Japanese scientists who won the Nobel Prize in recent years have all been saying that basic research is of importance. I strongly believe that we should review the time-consuming basic research that allows us to approach the essence of nature.

I also think that we may carefully apply gene recombination and genome editing technologies to our daily life to a certain extent until those technologies provide constant outcomes.

I have mainly been studying the genome regulation of microorganisms such as Escherichia coli.
That is because the total number of microorganism genes is small and phenomena that occur are simpler and easier for us to understand than those related to humans.

The basic mechanisms such as converting glucose taken in into energy and generating protein from DNA are similar to those of any cell including human cells.

We can say that to comprehend essential mechanisms of life such as proliferation and metabolism of cells, researching microorganisms that simply proliferate and metabolize provides the most suitable approach.

To do essential applications, we have to clarify and understand the mechanism that utilizes the whole gene.

Thus, I think that it is an effective approach to begin with clarifying the mechanisms of microorganisms. Ultimately I would like to comprehend the whole picture of genome regulation of a single organism. I also think that such knowledge will help us understand the whole gene mechanism and networks of living things including humans, animals and plants.

When we understand the causal relationships in gene functions of organisms or genome networks, it may allow us to flexibly and unrestrictedly apply them by gene recombination and genome editing technologies.