How could we continue to place information of Muslims in the “unwanted box?”

Since the September 11 attacks and the Islamic State’s killings of Japanese hostages, Japanese people have an image that Islam is a terrifying religion. While some point out that the image is dominant because of the lack of knowledge about the true religion of Islam, we would rather argue that the problem lies not in “lack of knowledge” but in Japanese people’s “not attempting to learn.” 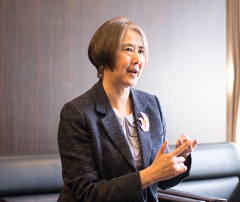 For people like us studying Islam and Iran, it seems strange that when an incident were caused by Muslim to shock international community, it is reported as a religious matter of Islam, while shocking incidents caused by other religious followers are not treated in that way. For instance, US President Donald Trump is backed by a large religious group of evangelical Christians, but his exclusive policies or statements that may be considered in defense of white supremacy are not attributed to Christianity. Even when the Irish Republican Army (IRA) (a militant nationalist organization) made bombs in the name of the Father, Christianity is not blamed. When Tibetan Buddhists self-immolate in protest of the Chinese government, Buddhism is not said to be a religion that undervalues human life. However, when Muslim extremists engage in terrorism, the matter is taken up as if it is a problem of the Islamic religion. Isn’t that odd?

Perhaps it is because most Japanese do not have the right information about Islam and the Middle East. Although some say that there is little information, in fact, quite a large amount of information just on Arab and the Middle East featured in the Japanese media. However, even after being exposed to such information, many people put it in the “unwanted box” of their minds. For example, there was news during last New Year holidays that anti-government protests were growing in Iran. This had been one of the biggest New Year’s news items appearing not only in newspapers, but also on the 7p.m. NHK evening news. Many Japanese people probably saw the news, but how many remember that news? I presume majority of Japanese tend to think that the Middle East is far away from Japan and what is happening there is of no concern to themselves, so to make them put the information in the “unwanted box” in their minds. However, there are 1.5 billion Muslims around the world. Their networks cover the broad area. If you want to understand the global trends and their influence on Japan, you cannot do without understanding about Islam and the Middle East.

Islam is a universal religion extremely rich in diversity

Now, what is the true religion of Islam? Frankly speaking, it is very hard to explain briefly. In a textbook-like explanation, Islam is a religion that worships the same God as Judaism and Christianity. The three are like brothers. One of the biggest distinctive features of Islam is that no Muslim has the final authority to define its doctrine. Varying with the times, there had been caliphs and the emergence of powerful leaders to guide Muslims, but the caliphate system was abolished during the 1920s and powerful leaders have not appeared since then. Today, while experts of Islamic law voice their interpretations and opinions based on Islamic law, it is left to the individual to decide whether to adopt them or not. There is no Islamic equivalent of the Catholic Pope. The basis of Muslim daily life is to live by the guidelines indicated by the Quran and the holy books. It is said that all people are equal before God, and their true worth is judged not by their birth or wealth, but by their deeds.

Historically, there were times the Islamic empire extended its rule from the Iberian Peninsula of the European continent in the west, through a part of China in the east. It may be thought that the Islamic empire had imposed Islam on people by eliminating opposing religions and powers using jihad to hold dominion over such a vast area; but in fact, Islam prohibits the forcible conversion. This is one of the basics written in the Quran. In fact, under the Abbasid rule of vast areas, there were some Jews, Christians and Buddhists within their territory.

So why has Islam spread worldwide? I think the Islamic principle that all people are equal before God and then the flexibility in applying Islamic doctrine motivated people’s conversion to Islam. As a matter of fact, Islamic jurists are ready in general to accept anything as far as it is not contrary to Islam. In other words, while living by the teachings of in the Quran, interpretations of the teachings may vary from person to person. I suppose many Japanese have the stereotypical image that Muslims strictly perform religious commandments. While there are such devout Muslims, there are others who seldom go to mosques. Indeed, the lifestyles of Muslims widely spread around the world differ by region. For being extremely diverse and in a way vague, Islam is a universal religion.

Women in Iran are also cheerful and happy 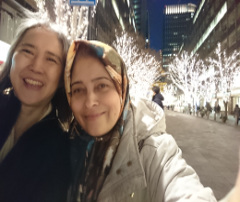 When I say that I have returned from Iran, people often ask me, “Were you OK?” or “Did you experience anything unpleasant?” That is probably because of the image of female suppression in Iran. Women in Iran are by no means leading lives in tears but are rather willing to enjoy life and are warm-hearted. From my personal experience in Iran for instance, when I was feeling unhappy having encountered sad things, a friend who had phoned me noticed that my voice sounded different. She was at my house in an hour with her husband driving the car and saying that I should not be left alone at times like that, and I was taken to her house. At her house, her entire family was awaiting to comfort me. They had taken special care of me for having come alone all the way from Japan, and I think it was a natural thing for them to offer a helping hand when one of their friends were in trouble or were distressed in daily life. In Iran, I was often asked what my religion is. I always answered that I am a lazy Buddhist. Their common response was to point out that all religions share the basic ethical principles and they were fine with my being non-Muslim. I guess that Muslims think a person with a proper religious belief rectify one’s conduct, so to render that person worthy of trust. I feel Muslims are more open-minded in comparison with Japanese society, in which people judge others by similarities and differences, sometimes leading to bullying.

Perhaps you may find it surprising that the percentage of female advancement in higher education in Iran is higher than that in Japan. Women attend top national universities and it is not uncommon to have women achieve top grades in the nationwide entrance examination similar to Japan’s National Center University Entrance Examinations. Moreover, Iranian women’s national futsal team is a world-class team winning the AFC Women’s Futsal Championship (Asian Championship) in 2015. Additionally, many Iranian movies are on high-level in quality, with some winning prizes at the Berlin International Film Festival and the Cannes Film Festival. It is unfortunate that these superb contemporary cultures and women’s performance are practically uncovered by the media in Japan.

Can Japan keep up with global society without trying to know about Islam!?

If I were asked whether Muslim society is a paradise, my answer is strongly in the negative. The current situation is that women graduating universities still have difficulties in taking an active part in society. While there are women enjoying sports in tank tops and shorts, there are millions of women having no access to sports. While superb contemporary culture is cultivated, peoples are suffering from endless wars and violent conflicts. I think there is much to be changed and reformed. But, this is also the same with Japan, the United States and France. There is no country that can be fully represented by one simple image. Islamic countries are no exception. The problem is that we keep on holding stereotypical image of Islam and Muslims without trying to learn about them. Even when we come in touch with their information, we do not care about our ignorance, putting that information in our “unwanted box.”

Today Muslims migrate on a global scale and have come to exchange information in dense networks with faraway friends and relatives using advanced information and communication technologies (ICT). In such an environment, what happens in Iran is shared instantly by those living in Los Angeles or Cologne, and world-wide business talks are current on their networks. Such networks, based on strong kinship and compatriot consciousness, are expected to have a new development and lead to the process of global “socialization.” Under such circumstance, I think Japan, remaining “ignorant” of Muslims’ situation, has the possibility of being left behind in the globalized society.