The year 2016 marks the centennial of the death of Natsume Soseki, a literary legend. Soseki wrote many literary texts on the subject of romanticism and egoism. Reading with the viewpoint of “prospect from urban space” can add a new aspect to these literary texts. At the same time, finding a new aspect in urban landscape through that evoked by literary works is one of the ways to enjoy literature.

Urban space in “Sorekara” by Soseki 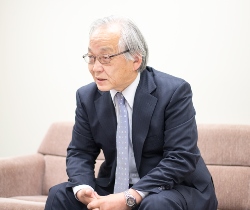 As I walk around the city trying to study a literary text in detail, I find anew that Tokyo has many slopes, cliffs and water channels. Landscape has been formed not only by natural phenomena but also by artificial phenomena. For example, I found that there used to be mountains around the Surugadai area until the early Edo Period, and the mountains were cut down to fill Edo Bay (present Tokyo Bay). The remnant of the landscape remains in the geographical name “dai (hill).” Difference in landscape by region is the difference of people’s activities in the past and culture. Such urban space has a great influence on literary works.

Today, works of Natsume Soseki are enjoyed as classics. Even though this year marks the centennial of his death, we can find new aspects in his works from the viewpoint of urban space. One of his novels, “Sorekara,” was written in 1909. Daisuke, the protagonist, was born in a bourgeois home in the Meiji Period. After graduating from a university, he stays unemployed and depends on his family’s wealth to avoid any social relationships. He is a man who acts like a koto yumin (high-class loafer). Daisuke’s friend Hiraoka, on the contrary, starts working in a bank after graduating from a university. He is forced to leave work after having been involved in troubles within the bank and seeks for a new job. Daisuke has had a secret crush on Michiyo, the wife of Hiraoka, and becomes increasingly convinced of his love for her as he sees her more often. This work is seen as a novel that depicts relationship issues between man and woman as well as the anxieties and distress of people in the modern age.

My focus is on Daisuke’s sense of geography and images of the scene when he visits Koishikawa, where Mr. and Mrs. Hiraoka live. As Daisuke walks up Andozaka, Koishikawa, he sees rows of little houses, which people have acquired with their limited funds. He thinks that people have no other choice but to live there as a result of the capitalist competition. Looking at the cloudy smoke discharged from the factory complex spread around the foot of the slope in Koishikawa, Daisuke finds people’s lives around the area unsightly. At that time, an army arsenal was built around the residence of the former Mito Domain in Koishikawa and the area was the newest industrial zone in Japan, which was striving to become an industrialized country. The area around the slope of Koishikawa, which used to be a lush forest, was going through a period of urban sprawl. To Daisuke, this was a completely different space from Aoyama (where his parents’ home is) and Fukuromachi, Kagurazaka, where he leads a private life. The “bridge of Edo River” (present Kanda River) and the “slope of Koishikawa” are the “boundary” to the other world. Being a koto yumin, Daisuke feels anxieties, discomfort and frustration whenever he tries to cross the boundary.

Urban space has a “boundary”

There are various boundaries in urban areas. These include natural terrains such as slopes, cliffs and rivers, Roku-Jizo (six Jizo statues) that are placed at the gateway from the main road to Edo, or artificial boundaries like Takanawa and Yotsuya Okido gates. There is an ambiguous space around the boundary that embraces both sides of the dividing line, but the landscape changes before and after this line. When people try to cross this line, they feel anxieties, hesitation, confusion or frustration. I personally think that these wavering and conflicted feelings are one of the inspirations for a literary work.

“Rashomon” by Ryunosuke Akutagawa, one of the literary descendants of Soseki, is a perfect example of a literary text themed on boundary. The mon (gate) where this novel is set is the symbol of boundary which is the gateway to the city. A servant appears and wavers in a conflicted feeling about whether he should cross the boundary and go to the “other side,” although he could only earn a living by stealing things. However, it is clear that he should cross the boundary in order to live. He chooses to “cross the line” by stripping an old woman of her kimono. In this way, he goes through a rite of passage that is necessary to cross over the boundary. Although this novel is often discussed from the viewpoint of egoism, it is an extremely prime example of a literary text themed on boundary. “Ra” in “Rashomon” means encompassing. The Rashomon gate encompasses the fortified city and Akutagawa depicted Rashomon as a gate that encompasses life. In his novel, the castle does not correspond to a city. Instead, he translated the boundary as a barrier that encompasses life, which people must face and break through. This literary text shows the true value of the artful author Ryunosuke Akutagawa.

Boundary symbols are used in urban scenes of literary texts in various forms. In another literary text by Akutagawa, “Mikan (Mandarins),” a tunnel is used as a boundary through which a frowzy girl turns into a sacred girl. “Yako junsa (Night Watchman)” by Kyoka Izumi is a literary text on poor people living in a valley of Yotsuya. They cross the boundary to enter a modern space symbolized by the British Embassy but are swept away. In “Bokuto kidan (A Strange Tale from East of the River)” by Nagai Kafu, Okawa River (present Sumida River) is the boundary between the real world and the utopian world where a dream woman lives.

Traces of people in real life are eliminated completely in the modern urban spaces, which are designed and built only for comfort. However, reading literary works may evoke various boundaries which existed in the past. Try to see the Koishikawa slope – where Daisuke felt frustration when he visited his loved one – from the viewpoint of spatial symbol for a boundary. You will find a different aspect of a “lived city” rather than a city in a generic context. 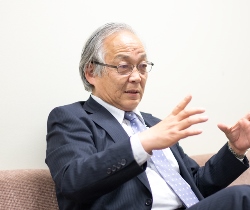 Looking at the boundary of a city as the background of a literary text is to understand the “lived city” illustrated by the author. This is also a great way to enjoy reading a book.

There was an author called Suehiro Tetcho who was in a little earlier generation than that of Natsume Soseki. In his political novel “Setchubai,” which was published in 1886 , he illustrates smoke from factories as a symbol of the great industrialization of Japan, in contrast to Soseki’s dislike of smoke depicted through Daisuke’s feelings. Although the huge difference in the view of Tokyo comes from the difference of the time, it may also be the difference in the “cognitive map” for the same scenery of the city, which was generated from each author’s history and feelings. The map is a space created through the cognition of each author. A space in a literary text can be seen as a space from the author’s cognitive map.

Today, walking around cities is becoming a fad. To me, walking around a city with a guidebook seems to be a one-size-fits-all activity. Try walking around with images of a city created by reading a literary text, which gives you a limitless stretch of imagination. You may find a different aspect in the city landscape that seems to have been familiar to you.

I have held an annual course entitled “Walking around Urban Space ” in Meiji University Liberty Academy (courses for external students) for the last 16 years. If you are interested, let us read modern Japanese literary text together by combining reading and walking.