Today’s economics cannot explain the sustainability of the Jomon society!?

Recently, it is often said that archaeology is again experiencing a boom. One may dream and have romantic ideas about ancient Japan or try to find clues for the future path of today’s Japan from ancient society. At Meiji University, which has the longest tradition in the field of archaeology among the private universities in Japan, while various on-campus initiatives and projects are also making progress.

The Jomon period communities, existed for more than 1,000 years 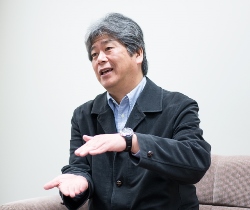 The Jomon period is a time in Japanese history from approximately 15,000 to 2,300 years ago, in society is said to have been one of hunting and gathering. Consequently, there is an image that the Jomon people always sought food resources, moving from one place to another. However, recent studies reveal that the Jomon people had in fact lived on the same archaeological sites for 1,000 to 1,400 years. In contrast, the sites of the following Yayoi period, which is characterized by paddy cultivation, existed for only several hundred years. Why had the hunter-gatherer Jomon people been able to live in the same place for such a long period of time? Our research team endeavored to figure out this interesting question from multiple aspects, introducing studies of physics and chemistry.

First, the clue to solving this question lay in the food of the Jomon people. Recent studies not only examined the food debris of the Jomon people, which consisted of seashells and animal bones, but also conducted isotope analyses of collagen extracted from human skeletal remains, enabling the estimation of the ratio of proteins taken by the Jomon people from animals and fish, and nuts and grains. As a result, we have come to discover that they ate a balance of animals, fish, shellfish and acorns, and that their staple food had been these acorns and other plants. Furthermore, as a result of analyses now available on burnt grains caked inside clay pottery, it has also been revealed that the Jomon people had removed the shells of acorns, boiled the shelled acorns in clay pots to remove the harshness of the taste, and pressed boiled acorns into cakes for eating and storage. The Jomon clay pottery in various patterns and shapes had been tools for processing acorns. Acorns were picked in season and stored, and eaten in a planned way. By so doing, they had no need to move from one place to another seeking food. In other words, we have come to understand that the Jomon people relied more strongly on forest resources than on hunting, and that the creation of a culture to process and preserve these resources has served as a base for the forming of a long-lasting society. Moreover, while previous studies on the Jomon period had centered on arguments, for example, that stated that a great number of people lived together on big archaeological sites, such as the Sannai-Maruyama site in Aomori Prefecture, we have come to understand, through our team’s excavation, that there had been houses of about five to ten at the most in one settlement at the same time. The population would have been around thirty to fifty people. It is thought that size was kept small, getting no bigger, to maintain an appropriate size to prevent depletion of the surrounding forest resources, including their staple food of acorns.

The Jomon people’s wisdom to use natural resources without depleting them had also been used in other areas. For example, while many of the shell middens of the Jomon period are found along the coast of Tokyo Bay, the Nakazato shell midden, which is the biggest shell midden in Japan, is located in Kita City, Tokyo. Although the area is now inland, Tokyo Bay had penetrated to this area in the Jomon period. A thick 4-meter layer of seashells extends along the seashores of the time for approximately one kilometer. The seashells of this midden are of only two types of extremely large hamaguri (common orient clams) and oysters. Hamaguri clams mark daily growth lines in cross sections of their shells just like the annual rings of trees. By counting these lines under a microscope, one can tell the age of the clams and the season they have been collected. In the case of the Nakazato shell midden, it was found that most of the hamaguri clams had been collected between May and July. This almost corresponds with today’s clam digging season. Oysters are assumed to have been harvested in the winter, when they usually bulk up. It seems that the Jomon people basically harvested hamaguri clams in the summer and oysters in the winter. Furthermore, small sizes of young shellfish could not be found in this shell midden. They had probably been released back into the sea. This can also be said to be the use of their wisdom to prevent depletion of marine shellfish resources so that they would be able to continue harvesting shellfish for a long time.

However, not all Jomon people had such rules for resource management. Though in the same coastal area of Tokyo Bay, shell middens on the Chiba Prefecture side have been found within the settlement sites indicating that shellfish had been harvested by each settlement, but they contained only small hamaguri clam shells. At the same time, all sorts of seashells, including those of Japanese littleneck clams, oysters, umbonium costatums, and mactra veneriformis were collected. An obvious gap can be recognized in the management capabilities of the Jomon people even in the same coastal area of Tokyo Bay. Why had this gap arisen? It cannot be answered by only examining the shell middens. In contrast, many settlement sites on the Tokyo side are found along the rivers deep inland, but had no shell middens. This means that shellfish had been distributed to inland areas, after being shelled and processed at the Nakazato shell midden. As seen above, the significantly different ways of using marine resources even in the same ecosystem indicate that there had been a big structural difference on the part of human society.

It is thought that culture and society had become stagnant in the late and final Jomon period. In the region of our analysis, settlements had gathered in more than ten places about 2 kilometers apart in a relatively narrow region around 4,000 to 3,000 years ago. Each settlement consisted of a few houses. However, we have become aware that some specific things are found in the hundreds in one settlement site, while none are found in another neighboring settlement site. An example is the clay figure “dogu” used at festivals. There have also been cases in which large amounts of seashells were found from sites a few kilometers away from the sea. It is thought that there had been roles for each settlement of a community and the settlements cooperated with each other to form a small regional society. For instance, one settlement planned the dogu festival, while another served as base for distributing marine resources brought from afar. In other words, each settlement had not been isolated, but had a highly developed mutual relationship with others. Through examination of human skeletal remains, it has also been found that many of the people of both the inland regions and coastal regions had eaten with a balance of forest resources of animals and plants, such as acorns, as well as marine resources of fish and shellfish. As just described, the roles of each settlement had been effectively used by the community and interaction of people and distribution of goods had been conducted frequently. This led to the prevention of depletion of resources that may have been caused by heavy population concentration in particular settlements, and is considered to have served as the basis for creating a long-term society. Small-scale settlements had used networks efficiently to obtain necessary goods and knowledge. Additionally, there is the theory that the cooling of the climate during this time had caused the society to collapse. But, we have been able to reveal that the Jomon people had used these social systems effectively to enhance the resilience of their society. I think this structure of the Jomon society will provide a clue to modern society in our pursuit of a sustainable society. 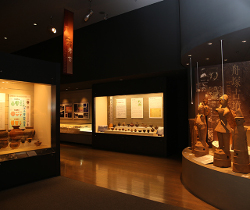 Mutual relationships of the Jomon people cannot be explained by such systems as the equivalent exchange system, which is the core of the money economy on which our society is founded. For example, bartered goods of equivalent value to the amounts of seashells cannot be found from around the Nakazuka shell midden. Also, it is not rare to find jade and bitumen from distant archaeological sites several hundred kilometers away. During the Jomon period, goods from specific production areas were distributed quickly and plentifully to many areas. It would be extremely difficult to explain these mutual relationships in terms of economics. Trust and friendship may have been the foundation of the social system. We modern people, who live each day facing the modern-day challenges of the money economy, would not be able to regard the system to be in any way primitive and barbarous. In order to further study the relationship between humans and the environment and share the study results for the common good, it is essential to conduct studies in an interdisciplinary way, as have new discoveries been made through views and methods of different fields. To this end, I think it is important to further promote interdisciplinary research projects through the collaboration of research organizations of various fields, such as our School of Science and Technology, with other universities.