Significant progress has been achieved in recent years in the research of plant hormones. This field is not very well known to the public, but it has been found that utilizing the function of plant hormones may lead to increases in crop yields and solutions to environmental problems. Such research is underway also at our School of Agriculture.

Plant hormones brought about a worldwide revolution in agricultural production

Plant hormones are substances that are produced in the plant body and control the growth, morphogenesis, and environmental responses of the plant. These terms may be unfamiliar to you, but the functions of plant hormones are made use of to increase crop yields and improve plants.

However, there are still many unknown things such as what hormone is related to growth in what way; in other words, this research field has enormous potential.

For example, do you know how to produce seedless grapes, which are very popular because they are easy to eat?

Soaking bunches of unpollinated grapes in a solution of molecules called gibberellin allows the grapes to bear fruit without being pollinated. In this way, seedless grapes are grown. This gibberellin is also a plant hormone.

Active research was carried out to increase grain yields from the 1940s to the 1960s. As a result, high-yield cultivars were found, and after that, the yields of grains in the world increased dramatically. This is called Green Revolution.

In fact, the cultivars found this time were semi-dwarf cultivars, the height of which was lower than that of the traditional ones.

Let me explain what this means. The height of plants grow as fertilizer is added. That a plant becomes larger appears to lead to a high yield, but it is too high, the risk of lodging due to wind and other forces increases.

For example, in Southeast Asia as well as Japan, rice stems are sometimes lodged due to a typhoon, suffering serious damage. The higher the stems, the larger the damage. In other words, giving good fertilizer to crops does not result in increase of the yield.

However, a cultivar that stops growing beyond a certain height was found. This feature lowered the risk of lodging and allowed adding the fertilizer to lead to fruits, resulting in a revolutionary high yield.

The reason why the use of fertilizer did not increase the height was actually unknown at that time. As the 2000s commenced, the reason was uncovered by Japanese researchers.

They discovered the action of gibberellin. The important function of this plant hormone is to increase the height of the plant.

A rice variety that exhibits a semi-dwarf character was found to have a weak ability to produce gibberellin inside the body and thus have a smaller amount of gibberellin.

This historical fact shows that a change in the functions of a plant hormone leads to a worldwide agricultural revolution.

Many things about plant hormones are still unknown to us. If we can unravel these mysteries and understand them correctly, it will become possible to alter their function artificially. This has potential to become a second or third green revolution.

I am currently working on a plant hormone called strigolactone. Strigolactone has great potential to bring about a second green revolution in Africa.

In Africa, a root parasitic plant called Striga is growing. A root parasitic plant, which will not be very familiar to you, is a plant that entwines its roots around the roots of a host plant and connects to vessels in order to steal water and nutrients from the host.

After parasitizing, Striga produces purple flowers, and one individual plant produces about 100,000 seeds. These seeds are very small and look like powder. Once they are spread on soil, it is almost impossible to eliminate them.

Additionally, there is a big problem that Striga is parasitic on the roots of essential grains. As such, it is not uncommon in Africa for a green field to be covered in purple.

In fact, the damage to agricultural products due to Striga is estimated to hundreds of billions or even a trillion yen per year. For this reason, Striga is also called witchweed.

The seed of Striga can continue to survive for more than 50 years while sleeping under the ground. As the root of a host comes close to the seed, the seed senses it and germinates to parasitize it. Many Japanese researchers have been involved in the elucidation of its mechanism too.

In soil, fungi called arbuscular mycorrhizal fungi (AM fungi) are living. They receive sugar, a product of photosynthesis, through a plant root and provide the plant with mineral nutrients such as phosphorus, establishing a symbiotic relationship.

As a signal to facilitate this symbiosis, the plant hormone strigolactone is released from the root. Striga is known to also recognize strigolactone as a signal and thereby detect the presence of a host plant. Then it germinates and penetrates into the host.

So, if the production of strigolactone is stopped, Striga cannot germinate and becomes unable to parasitize to the host, while at the same time it becomes impossible to establish a symbiotic relationship with AM fungi, which are important for plants.

Strigolactone also works as a hormone to control the branching of a plant.

Like this, strigolactone acts on various aspects of plant growth without being limited to one action. Thus, increasing the positive effects while reducing the negative effects is an important research theme.

For example, strigolactones with a different chemical structure exist in abundance in the nature. Some of them have been found to be less active to promoting the germination of a parasitic plant but still have the function of facilitating symbiosis with AM fungi.

It is also known that strigolactones with different chemical structures do not act in the same way on all plants.

The research to elucidate the mechanism of such plant hormones is complex and difficult, but its findings may contribute to agricultural development, which is later called green revolution, produce new technologies like seedless grapes, and save us from damage to agricultural products that amounts to as much as one trillion yen per year. 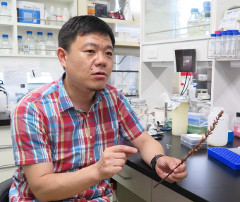 The Salk Institute for Biological Studies in the United States, to which I previously belonged, conducts research utilizing plant functions, as one of the efforts to reduce CO2 emissions.

As you know, plants absorb CO2 and use it for photosynthesis to produce sugar. However, it is not simply the case that increased amounts of plants reduce the amount of CO2 in the atmosphere.

As CO2 is fixed as sugar by the photosynthesis of plants, the amount of CO2 in the atmosphere decreases. However, after that, if the sugar is eaten by humans or animals, or is decomposed by microorganisms or other decomposers, it is metabolized and released in the form of CO2 . In short, the circulation of CO2 continues.

However, plants have a substance that is more stable and harder to be decomposed than sugar. This substance is suberin.

If we can increase the amount of suberin, which is composed of numerous carbon atoms and is not easily decomposed, CO2 is fixed in the form of suberin and the CO2 circulation is suppressed, with a smaller amount of CO2 released into the atmosphere.

Some plant hormones control the growth of roots. Research from such a perspective is also underway.

Therefore, research on plant hormones is highly likely to contribute to issues related to agricultural products as well as global environmental issues.

Despite its current unfamiliarity, as the public become more interested in this research field, it will help the research move forward. I really recommend you to take interest in information on fields like this.

* The information contained herein is current as of July 2020.
* The contents of articles on Meiji.net are based on the personal ideas and opinions of the author and do not indicate the official opinion of Meiji University.
* I work to achieve SDGs related to the educational and research themes that I am currently engaged in.