A society is its language. As you study the language of a certain country, its society will come into view. Then, how does Japanese society appear to those who study the Japanese language? What are the differences and similarities between Japan and China, both of which use the same Chinese characters, kanji?

I chose to conduct comparative studies on Japan and China largely because I have deepened my understanding of Japanese society by studying the Japanese culture and its various social systems since coming to Japan to study in 1987. Also, I have developed the skill of observing things that are related to Chinese culture from a distance since I have been away from China for such a long time.

Eventually, I came to notice that both Japan and China share the four great powers that allow for the establishment of modern society in each country: sentiment for one’s mother country; traditional culture; feelings toward one’s language; and recognition of a supreme authority. I view these four powers as social cohesiveness. And I found that Japan and China share a number of qualities in their feelings toward their respective languages.

First, language is very important in terms of social cohesiveness, that is, the power to bring society together. This is because language is closely linked with the social group that uses it.

For example, I am a Hakka Chinese from Guangdong Province in China. The Hakka are a branch of the Han Chinese. Hakka people moved from near Chang’an (currently Xi’an) and settled in Guangdong Province as well as other regions. The Chinese characters “Kyaku (客)” and “Ie (家)” are pronounced “Hakka (客家).” This is how our people came to be called “Hakka.”

The Hakka speak the Hakka language, which is completely different from Mandarin, the common language widely spoken in China today. I always spoke Hakka when I was home, but I was mocked when I spoke it in Beijing. I was laughed at because I could not speak Mandarin correctly, and I had an accent.

When I came to Japan to study and was exposed to the Japanese language, I felt something odd again because Japanese uses hiragana and katakana characters in addition to kanji.

Even so, as I became able to read and write Japanese through hard work, I began to feel that the combination of kanji, hiragana and katakana characters was beautiful and soft.

The odd feelings I felt toward Mandarin and Japanese when I was young were my prejudice. People discriminate by thinking whatever they believe is the most wonderful and beautiful, and anything else is inferior. This helps them maintain a sense of superiority or pride. But this is a natural human feeling.

However, by taking advantage of this feeling, you can pull together a group of people who speak the same language to differentiate from groups who speak other languages. This is called the social cohesiveness of the language.

Let’s take a look from a little distance. Neither the Hakka language nor Mandarin is more beautiful than the other. The same goes for Chinese that uses only kanji and Japanese that uses a combination of kanji, hiragana and katakana characters. It is obvious that none is superior to the others. If you say one is more beautiful, that only shows your ignorance of the other.

Language has also something to do with nationalism. This is because language is seen as a symbol differentiating one’s country from other countries.

Sometimes you may feel your language is inferior to the languages of other countries in comparison. And at other times, a language is treated based on an expedient motive from a national strategic perspective. Because of this, people can develop complex feelings of both love and hate for their own language.

In the early Meiji period, elites in the new government considered that various aspects of Japanese culture were inferior to Western culture, and therefore, advanced westernization. As the kimono was converted to Western clothing, they tried to abolish the Japanese language and introduce the English language into society. It appears that people in the elite class had a much greater inferiority complex toward the Japanese language during the Meiji period.

The idea of the abolition of the Japanese language was narrowly averted, and instead, an idea of creating a common language to be used across Japan came about. In doing so the government aimed to form Japan into a nation-state.

However, the elite of the time still wanted to abolish the Japanese language because they had too much pride to use their language as it developed based on kanji from China, which Japan had defeated in the Sino-Japanese War.

Before and after World War I, the abolition of the Japanese language was debated with a view to Japan’s global expansion, not due to a sense of inferiority. It was probably because the government thought colonial rule would be difficult through an exotic language like Japanese which uses kanji.

However, it took on a different posture after World War II. Having been humbled after defeat, the abolition of the Japanese language was a consideration prompted by despair.

The situation turned around once again during the period of rapid economic growth after the 1960s. Japanese society recovered its confidence, and since that time the abolition of the Japanese language has not been debated. Rather, when the bubble collapsed in 1990s and the rapid economic growth came to a halt, people began to praise the beauty of the Japanese language in order to regain confidence.

In fact, any sense of inferiority toward the Japanese language felt by the elite was completely unrelated to the general public. People tend to think what they own is most wonderful partly because they do not know anything else. This time the elite exploited this sentiment among the general public.

Surprisingly the same thing was happening in China. In the 1920s, whether kanji should be abolished or not was debated because of a sense of inferiority felt by the people. However, when the People’s Republic of China was established in 1949 and its economy began to grow, the debate subsided. Nonetheless, simplified Chinese characters, which reduced the number of strokes and simplified the traditional kanji, were created.

As many of you may know, simplified Chinese characters look like just simple symbols compared to traditional kanji. For example, even if those simplified characters are written using a brush, they do not feel quite right. They do not look beautiful to my eyes.

And in the 1990s, with rapid economic growth, Chinese society regained total confidence and began admiring its kanji. There have been movements for rediscovering the merits of the traditional Chinese characters.

As mentioned above, feelings toward a language signify social cohesiveness as well as nationalism. Language was once the subject of feelings of inferiority, but both Japan and China are going through a similar course of history. 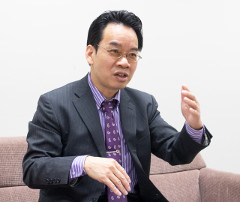 Social cohesiveness is more than the power of a nation to reach out to individuals. It also includes the effort of each individual to connect to that power.

For example, although Mandarin became the common language through national strategies, people in local areas, particularly the elderly, would not adapt to this language at first. However, as society began to provide good jobs for those who could speak Mandarin, young people also began to voluntarily study this language. Mandarin was necessary to make a living.

In modern society where individuality is not easily expressed, sometimes you lose yourself and become overwhelmed by a feeling of helplessness and meaninglessness. At such times, being connected to something familiar can bring peace of mind and healing.

That may be traditional culture or sentiment for one’s mother country, to which many people in society feel connected. At the same time, being connected to such social cohesiveness can also bring you a sense of superiority.

However, being connected to society without careful consideration does not necessarily mean you can recover your authentic self. Sometimes you may need to observe society from a distance.

In order to do so, you need to have respect for others. Paying respect gives rise to unprejudiced interest in people. As long as you look down on them, you cannot really learn anything from them.

In recent years, the quality and performance of translators and translation apps have improved considerably. Such devices and apps are very useful when you take sightseeing trips. But if you truly want to learn about the society and culture of a certain country, you need to learn the language of the country.

I seriously studied Japanese. I was deeply moved when I learned that I could create beautiful and soft sentences, just like flowing water, by combining kanji and hiragana characters.

That experience also broadened my potential. I would never have been able to see my potential if I had remained my old self – the man who learned Mandarin to make a living, was connected only to Chinese society, and retained a prejudice against the Japanese culture.