Training the Global Human Resources that are in Demand Today

Together with the progress of globalization, developing global human resources capable of thriving on the global stage, across national boundaries, has become the subject of lively debate from multiple sides. In the past, global human resources were seen as those skilled in foreign languages and communication, but today that is no longer enough. When I think of global human resources, I think of those with sympathetic intercultural understanding grounded in a love of humanity and outstanding ability to open up new paths to the future based on logical thinking. I believe that people with such talents are those who will solve the problems faced by Japan and the world, and open up the future.

Global Human Resources to Open Up the Future

Together with the progress of globalization, developing global human resources capable of thriving on the global stage, across national boundaries, has become the subject of lively debate from multiple sides. In the past, global human resources were seen as those skilled in foreign languages and communication, but today that is no longer enough. When I think of global human resources, I think of those with sympathetic intercultural understanding grounded in a love of humanity and outstanding ability to open up new paths to the future based on logical thinking. I believe that people with such talents are those who will solve the problems faced by Japan and the world, and open up the future.

While each university is striving diligently to train global human resources, it is not a simple task. Study abroad programs are one means of training global human resources, but for various reasons it is not possible for every student to study abroad. For this reason, it is important to provide opportunities for intercultural experiences in Japan, in addition to efforts to send students abroad. Recently, Meiji University held the first Model United Nations Workshop in Japan as part of its efforts to accept students from abroad and deepen international exchange. This workshop gathered together more than 100 students and faculty members from around the world for sessions on methods of solving the issues the world faces today. The University also signed an agreement with the Japan office of the United Nations High Commissioner for Refugees (UNHCR) under which it admits refugees based on recommendation. We have accepted seven refugee students so far. A student who fled Afghanistan made a strong impression on me. At one event, the student expressed his heartfelt gratitude for being able to study at Meiji University and delivered a wonderful speech as if it was the upmost joy a human can have. I am sure that student who has lived a tough life, was able to influence other students through his exchange. 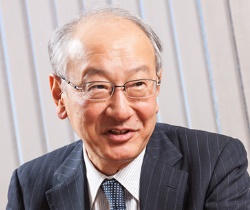 Recently Meiji University was chosen as one of the members for the Top Global University Project (Global Traction Type) by the Ministry of Education, Culture, Sports, Science and Technology of Japan. The University’s comprehensive educational reforms were under consideration even before this program began. Specifically, the class schedule will be restructured into 100 minutes, composed of two 50-minute modules. Also, the academic calendar will be restructured to four seven-week terms based on the two-term system consisting of two 14-week semesters. Use of this flexible timetable and academic-term system will create an active term that can be used freely for purposes such as studying abroad. Students also can use this time for short-term visits overseas, or for activities such as those concerning intercultural exchange or globalization, to learn on their own initiative.
We worked out this flexible schedule ourselves over two years. Such bold reforms express well the culture of Meiji University. Meiji University, founded with Rights, Liberty, Independence and Self-government as its guiding principles, makes decisions with a focus on building consensus among faculty members instead of using a top-down approach in which the President makes all decisions. For this reason, in my own leadership as President, instead of a powerful leadership style I employ a style based on coordinating the whole like a conductor of an orchestra, identifying general directions in which to move and respecting the views of individual faculty members. Our aim is to ensure that the global leaders trained by Meiji University also have the ability to lead the way to solutions while respecting individuals, amid diversity of values.

Sending 4,000 Students Abroad in the Next Decade

I noted above that foreign language skills alone are not enough to be a global human resource. Put another way, foreign language skills are the minimum skill required. As such, at Meiji University we see raising the level of foreign language abilities as the challenge we must face at the present time. The Top Global University Project fund will be provided for 10 years. Our vision for the period after this decade is described in “Going Global Meiji 8000!–Developing Students with a Frontier Spirit for the Future, by Encouraging Students’ Proactive Learning.” The number 8000 refers to the number of graduates from Meiji University each year, as we aim to graduate 8,000 global human resources into the world each year. We are also aiming for 4,000 students to earn credits studying abroad—that is, to send one-half of our students abroad by the time they graduate. Of course, foreign language skills are essential in order to earn credits from studying abroad. I would like us to utilize a wide range of programs to improve students’ foreign language abilities.
In addition, it has been pointed out that young people today have an inward orientation, and they are said to have little aspirations to go overseas. While it may be a fact that such a dimension can be seen among some young people, I do not think it necessarily applies to the younger generation as a whole. Meiji University has been chosen for three Good Practices (GPs) as part of internationalization efforts by the Ministry of Education, Culture, Sports, Science and Technology of Japan. One of these concerns a project to promote collaborative education through partnership between universities. As part of this initiative, it holds briefings together with other universities on programs to dispatch personnel to serve as international public officials in nonprofit organizations and nongovernmental organizations that are active internationally. In fact, in the first fiscal year, more than 1,000 students attended. It definitely is not the case that most students lack an interest in international issues. If they only have the opportunity, they will act on their own. Perhaps we should remind ourselves that if young people (students) seem to be inward oriented, this could be due to insufficient development of various systems at the university level.

Becoming a Country that Truly “Thinks” and Has “Something to Say” 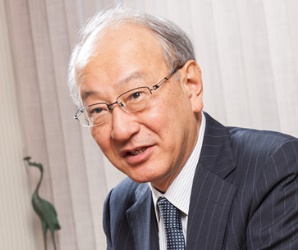 Various universities including Meiji, have prepared numerous programs to develop global human resources. While it is true that learning foreign languages is very important, the most essential precondition is to have “something to say”. Even an expert in a foreign language cannot be described as a capable global human resource if he or she has nothing to say. The university is where students can thoroughly forge their ability to think in order to have something to say. . I believe that if they have an idea they want to convey, then they will study proactively and learn foreign languages as a natural consequence.
Also, I do not believe that the university alone should be responsible for all aspects of development of global human resources. I think it is essential that people recognize the necessity of training global human resources, as a contemporary development in society. To foster such a development, society needs to be open. Even while extolling internationalization, Japan seems to remain a closed society today. An example is the issue of immigration in connection with the nation’s low birth rates. I think that even now not many people consider accepting immigrants and building a society of multicultural coexistence with them, and instead simply look at the issue as one way of securing labor. Aside from the issue of accepting immigrants, how should Japan respond to globalization? Japan needs to be a sophisticate, open, thinking country. I believe this represents the globalization of Japan in a true sense. And now is the time for society and universities to partner and train the young people of the next generation.