The fiscal year ended March 2015 saw a succession of companies announcing final profits and increased dividends, and the Tokyo Stock Exchange’s Nikkei Average reached its highest level in 15 years. While it is clear that these represent successes of Prime Minister Shinzo Abe’s “Abenomics” reforms, the efforts of individual companies also must not be overlooked. They also are the result of companies’ efforts to reform the ways they act as enterprises and their business structures, in response to changing tides in the global economy and technological innovation. However, while some companies have been able to make such changes, others have not. How do they differ?

Companies that Can and those that Can’t

Q: In some cases companies’ results differ clearly even within the same industry and the same size category. What do you think causes such differences?

It is true that often sees companies fall into two categories. Some companies are able to innovate and others are not. This is true in terms of both technology and management. Even though they are rivals in the same business, one company generates innovative technologies and, over time, massive growth while another is unable to do so. Some companies also find themselves involved in scandals. While it may seem like most companies are involved in some kind of problem, in fact this is true of only a few companies. And, strangely, the companies that get involved in scandals tend to do so repeatedly. Once the storm dies down they do the same thing again. At the same time, their nearest rivals might not get involved in any scandals at all even without specifically trying to avoid them. They would rather go out of business than do the kinds of things that lead to scandal. After studying individual companies to see how they differ, I reached a tentative theory that there companies may have something like their own DNA.

Roughly 60% of Leading Companies have DNA 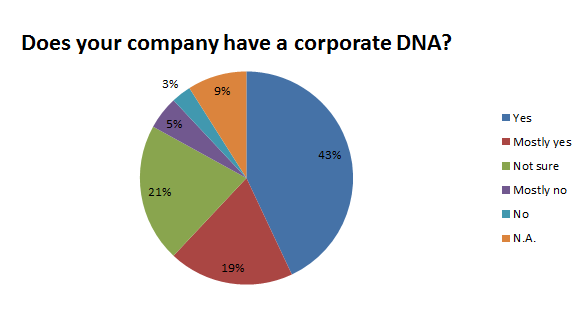 Q: What is referred to by a company’s DNA?

Leaving aside the detailed analysis and logical processes, I define a company’s DNA as something possessed by the individual company that is passed along in the form of its standards for values, the bases for its thinking, and the code of conduct of all its employees. As examples of resulting positive management behavior, these could govern whether companies innovate or act based on strategic management. As negative examples, they could be the motives for or causes of corporate scandals or improper activities.

It would not be persuasive just to describe corporate DNA in terms of theory or a rough image, so I conducted a survey. First, I narrowed the subjects down to the members of the Nikkei 225, or the 225 firms listed on the First Section of the Tokyo Stock Exchange whose stock prices make up the Nikkei Average. These represent the leading firms in Japan. Of these, I classified the 149 companies founded at least 100 years ago (give or take a decade) as “100-year companies,” and the remaining 76 companies as “Nikkei 225 companies.” I also chose 128 companies with histories that span well more than 100 years from the ranks of “long-lived businesses” as defined by Teikoku Databank, Ltd., and I surveyed them as well.

I received responses from 60 companies, or 17% of the total of 353 companies to which I sent questionnaires. Getting straight to the point, 43% of these companies gave a clear “yes” answer to the question “Does your company have its own corporate DNA?” while 19% answered “mostly yes.” Thus, 62% of these companies answered in the affirmative when asked if they had their own corporate DNA. Only a combined 8% answered “no” or “mostly no.” While 21% answered “not sure,” I believe that the results of this survey were clear enough to form a tentative theory (see graph).

Q: What does each company think of as its own DNA?

When I asked these companies “what specifically” was their corporate DNA, most of the Nikkei 225 firms less than 100 years old gave abstract answers such as management principles, corporate principles, company culture, or management philosophy. On the other hand, the companies that were 100 or more years old tended to give answers along the lines of their spirit, guiding principles, or founders’ words, with some even describing their companies’ personality by likening it to a type of human being. They also gave answers that were on the lines of principles or symbols. While one would think that long-established firms would be more likely to cite principles or symbols, that was not the case. The more long-established firms tended to refer in their answers to their products themselves. For example, a brewer of Nada sake answered “sake,” while a maker of miso answered “miso.” It was as if the DNA of fermentation had become the company DNA itself. While some of these companies too answered “founder’s words,” what stood out was the number whose answers referred to “foundation place.” In a way this calls to mind the “white clouds” of Kanda Surugadai in Meiji University’s school song. Whatever the case, the results of this survey gave the impression that long-established firms were more likely to cite clear, specific examples, rather than just principles.

Products and Land, Above and Beyond Principles

To investigate this point a little further, I visited a Hatcho- miso company in the city of Okazaki, Aichi Prefecture. I spoke with the present head of one of the two companies using the name “Hatcho-Miso .” I was told that serious consideration of the company DNA showed that it was none other than the product of Hatcho-miso itself. The company is very successful, receiving numerous orders for its products and welcoming many visitors on tours of its plant. However, the head of the company did not necessarily seek growth of the business, preferring stability instead. Also, while this is a business that has remained in the family for more than 10 generations since its founding, I was told that when thinking of the subject of future business continuity and keeping succession within the family was not necessarily a precondition. Furthermore, I even was told that it would be acceptable for the company’s name and trademark to change with the times. The head of the company told me, “The only point on which I will not give way is that we will continue making miso that tastes the same, here in the same place, 50 or 100 years from now.” Thus, the company DNA that needed to be carried on was not its lineage, or its principles, or even its trademark. It was the product itself. The data of that DNA is embedded into the product made in that place. Its DNA truly referred to the company’s main business, and what the company is carefully passing along through the generations is what it considers the basis of its business.

In other words, this company can continue to do its business the right way no matter who takes over, because it is not the result of the ability or effort of any specific individuals, whether management or employees. Instead of a single big point, this is an unbroken string connecting numerous small points. It stays alive continuously at a deep level beyond simple management expertise or skill, and I think that a company that can carry out such genetic management is one that can be described as a strong company. I might even add that such companies value the land (their local communities) as foundations of their business, and more of them are located in rural communities than in big cities. I think that this may be a key to stimulating the economy and revitalizing local communities, both which are subjects of concern today.

Q: Thank you for speaking with us today. You have provided many suggestions for how we think about the revitalization of local communities.