Above All, Listen to Authentic Local Voices

With centralization in Tokyo progressing even further and amid the publication of reports predicting that the number of local authorities will be halved, the government has established the Headquarters for Overcoming Population Decline and Vitalizing Local Economy in Japan and is launching regional creation initiatives. While I am not an expert in politics for public administration, I am deeply concerned about the disappearance of traditional annual events from our regions, the collapse of village communities, and the progressive loss of the attributes that used to distinguish Japan’s provincial areas from its large cities.
From the perspective of my area of specialism, folk culture, the most important thing in initiatives aimed at restoring the vitality of Japan’s provincial areas and regions is to listen carefully to authentic local voices from those regions and to respect their folk culture, including their customs, traditions, events, and festivals. Folk culture could be described as the identity of a region. Folk culture is part and parcel of people’s daily lives, so success will be impossible unless efforts are made to pinpoint each region’s identity as shaped by both geographic conditions (such as the local weather) and historical factors, and to use this as the basis for rebuilding that region.
In this sense, it might perhaps be more appropriate to call it regional “regeneration,” with an emphasis on completing and perfecting that which is already there, rather than “creation,” which implies that something is being produced for the first time. Success is unlikely to be forthcoming if the task is approached in the sense of creating something from nothing, bringing in something completely new to replace the old. This also relates to differences in “community resilience,” that is to say, the ability of a region to mobilize all of its resources to work effectively together. This is because each region has different inhabitants and different circumstances.
As well as folk culture, another of my specialist fields is ancient Japanese literature, specifically the Kojiki and Nihon Shoki, as well as the Man’yoshu poetry anthology. How are these linked? To put it simply, my method of research is to try to unravel issues from the perspective of ancient literature and folk culture. The study of folk culture is the study of daily life. The three works of ancient literature that I mentioned contain many poems about daily life. In particular, many of the free-form poems called kayo (which do not follow the fixed pattern of lines of five and seven syllables, but also include lines of four and six syllables) were inspired by actual experiences of daily life. In other words, these two areas are linked by the keywords “people’s lives.” Although ancient Japanese literature and folk culture appear to be completely separate genres, to my mind they have strong links to each other. 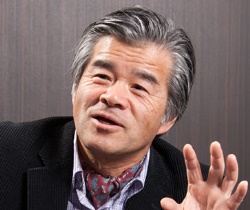 One of the key areas of my research has been Japan’s earliest literature, the setting for which was what is now collectively known as the “Asuka-Fujiwara: Archaeological sites of Japan’s Ancient Capitals and Related Properties”; Japan is currently seeking the inscription of this cluster of sites on the list of World Cultural Heritage Sites. The increased attention that would arise from registration of the Asuka-Fujiwara sites as World Heritage Sites would likely bring about a rethinking of the starting point of Japanese culture, namely the Kojiki, Nihon Shoki, and the Man’yoshu. Poetry – kayo and waka, and more recently tanka – could surely be described as an integral part of Japanese identity.
So what is a poem? I have always asked myself this. I have continually wondered why poems are recited or sung, how they functioned in villages, and why they were passed on and regarded as necessary. I went to Miyako-jima, an island in Okinawa Prefecture, for the purpose of further study. A variety of ancient religious festivals still survive on Miyako-jima; in Karimata, a village of just 270 households, there are many sacred poems called “kamiuta,” which have been passed down through countless generations without a break. These are poems dedicated to the gods. My book Uta no gensho e: Miyakojima Karimata no kamiuta to shinwa [In Search of the Origins of Poetry: The Sacred Poems and Legends of Karimata, Miyako-jima], which was published last year, is the culmination of 26 years of visits to Karimata to study the meaning of these kamiuta, which are still not fully understood. As the title suggests, it is an exploration of how poetry came to be.
In investigating this topic thoroughly, I reached a single conclusion. Poetry was the very foundation of our lives. It provided the justification for our existence. Okinawa has a harsh natural environment, with droughts and typhoons, so why did people settle and go on living there? It is because of the message that “we lead our lives here because the gods have granted us our homes and fields,” which has been passed down to the inhabitants. I discovered that everything they know about what type of gods the gods are, how to build a village, and why their ancestors were granted their homes and fields by the gods has been passed down through the generations in poetry.
Festivals on the mainland are loud and colorful, and attract many onlookers, but the religious festivals that form the basis of life in places such as Miyako-jima are not spectacles to be shown to others. It is sufficient for the people who live there to observe them. This is how these religious festivals and poems have been preserved and passed down through the generations. To start with, people would not open up to me or my companions when we arrived from Tokyo. It was unthinkable that we should go anywhere near the sacred grove where these religious festivals are held. However, we visited regularly every year and were eventually permitted to attend. Now, people actually ask us questions. “What does this mean? What value does it have?” The villagers are now considering anew the significance and value of things that they had come to take for granted, having been passed down since ancient times.

I am examining the relationship between folk culture and community resilience. The term “community resilience” originated at the time of the reconstruction effort that followed the Great Hanshin Awaji Earthquake 20 years ago. At the time, the pace of progress in reconstruction varied from district to district in Kobe and other areas and it was said that the places that had recovered most quickly were those with community resilience. Subsequently, this term came to be used in other regions as well and areas where local citizens are able to unite and work effectively together are described as having community resilience. At which times are people able to work effectively together? I believe that places that make a powerful effort to maintain folk culture are those that have community resilience.
For example, in relation to folk entertainment, there is a dance that is performed at the summer festival held in the Sugisawa district of Yuza-machi, a town at the foot of Mount Chokai in Yamagata Prefecture. The dance is performed in August, but local residents – from elementary school students right up to elderly people in their 80s – begin gathering to prepare for the dance about a month earlier than that. The elderly people teach the dance to elementary school students and young people, while the costumes are taken care of by the mothers and grandmothers; thus, the whole community comes together to support and pass on this dance to a new generation. This festival and these preparations give the area a sense of community. Folk culture is a forum for cultivating this sense of unity. It is difficult to express community resilience and numerical terms, but if this were possible, areas where folk culture survives like this would undoubtedly have a high score. Folk entertainment and festivals have the potential to bring people together. I believe that this also becomes a source of strength to drive community reconstruction in the event of disaster.
The Ogatsu district of Ishinomaki City in Miyagi Prefecture has a traditional theatrical dance called the Ogatsu Houinkagura, which was taught by itinerant monks. This area suffered immense damage as a result of the March 11 earthquake in 2011. Much of the equipment was washed away, including the masks and the costumes. However, in October of that year, the dance was performed again, this time at the Kamakura-gu Shrine in the city of Kamakura. A support group re-creates masks, while various people work together to make costumes. This traditional dance is going to be at the very heart of community reconstruction. This really can be described as a model example of strong links between folk culture and community resilience.
As an agent of community resilience, folk culture could well have a crucial role to play in regional regeneration.

It is important to think of folk culture not merely as something relating to traditional performing arts and festivals, but as a thread running throughout people’s way of life. It also includes a range of mechanisms and wisdom concerning daily life: for example, in the area of Japan dubbed Snow Country, it encompasses such matters as how to deal with heavy snow. I myself am from Yamagata Prefecture, which has a lot of snow, creating a harsh living environment that entails great deal of hardship. It is cold, roads become impassable, and there are many accidents. Winter is a constant battle with the snow. Nevertheless, it is not only a battle with the snow. There are cultural traditions based on a close relationship with the snow. There are sports that can only be enjoyed in Snow Country, such as skiing. People want to utilize the riches that snow brings. There is a term for it in Snow Country: risetsu, which means “making good use of snow.” It is a concept that involves drawing out the positives from a negative situation. Conversely, in hot areas such as Okinawa, people seek to make use of the riches brought about by the warmth. Thus, regional revitalization actually requires that we respect the folk culture unique to each region and find the riches therein, so that we can make good use of them.
On Saturday, March 14, the Meiji University Research Institute for Japanese Ancient Studies and the Council for Promoting the Registration of Asuka-Fujiwara as a World Heritage Site are holding a lecture and discussion at Meiji University’s Liberty Hall. I will be giving a talk entitled “What was the Man’yo Culture of Asuka?”
http://www.kisc.meiji.ac.jp/~meikodai/obj_info.html#asukafujiwara2015