Introducing a new perspective on the development of renewable energy

The development of various kinds of clean, safe renewable energy is currently moving ahead. One of the major issues is the improvement of energy supply capacity. We should not rush to open ever bigger power plants to address this; rather, since we are dealing with the development of natural energy sources, our stance should surely be one of learning from the efficiency which is a law of nature. 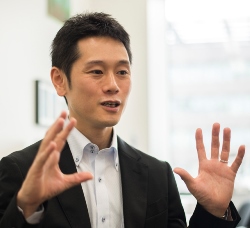 The accident which occurred at the Fukushima Daiichi nuclear power plant as a result of the Great East Japan Earthquake in 2011 forced us to become aware of the immaturity of our scientific capability. At the same time, we can say that it became the origin of a fundamental desire for a sustainable societal structure from the standpoint of energy issues.

It is probably natural that society is moving away from nuclear energy, with its safety concerns, and fossil fuel energy, with its problems of resource depletion and CO2 emissions, towards renewable energy. However, there is also a major issue with solar and wind power generation, which are core components of renewable energy. This is the lack of capacity to fully meet the energy demands of society. In response, there has been a shift towards policies of increasing the number and scale of plants in order to raise the volume of energy supplied. This is really a case of brute force. Surely it would also be a good idea to have more measures for the development of technologies to raise the conversion efficiency of renewable energy. I believe that we can find some hints on how to do this in nature itself.

One renewable energy technology that has begun to attract attention recently is artificial photosynthesis. Here, too, the upgrading of power production capacity is among the major issues, and so various photocatalysts have been developed, in a race to increase energy conversion efficiency to the greatest degree possible. Of course, the development of photocatalysts is important, but I believe that a new perspective may be necessary here. In my opinion, in order to build efficiency, it is also important to grasp the intrinsic qualities of the natural process of photosynthesis and to reconstruct artificial photosynthesis based on the same mechanisms. There should be some hints here about how not to rely on scale. My field of research, “self-organization”, has the potential to unlock the essence of the efficiency with which nature is equipped.

The aims of research into “self-organization” 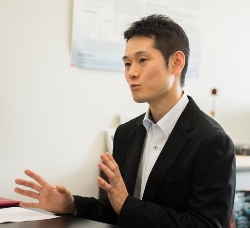 I am researching “self-organization phenomena”, the ways in which certain rules or orderly states occur naturally in the activities or behaviors of various living things. These include the spiral shoal formed by horse mackerel as they swim together, or the V-shaped flock in which geese fly. These behaviors are not the result of an order by a designated leader; they are ordered structures which arise naturally among the group. This self-organization which is brought about by living things can be reproduced among inanimate objects, and I aim to abstract the essential nature of this self-organization by so doing.

There is an experiment which goes as follows. If you place Euglena culture fluid in a shallow, enclosed dish and shine a bright light on it from below, a speckled green pattern appears in the culture fluid. This kind of speckled pattern appears due to the extreme concentration of Euglena in some areas and not in others. This is the phenomenon of bioconvection. If a light is shone upon them from below, the Euglena will move towards the top of the liquid in order to avoid the bright light. However, since the bodies of the Euglena are heavier than the liquid, they cannot remain at the top for long, and they sink. When this happens, they again climb upwards in order to escape the bright light. Through the repetition of this process, areas of concentration and areas without such concentration naturally occur, and the Euglena continue to swim cyclically within the former. The more Euglena gather together, the more of a shadow they create, and the easier it becomes for them to escape the bright light. In other words, they themselves create a cyclically changing light environment. We are now approaching this from the angle of how the formation of this speckled pattern is related to the biological reactions of each individual Euglena. If we can find that the self-organization phenomenon of Euglena is linked to the factors which increase the efficiency of their photosynthesis, we hope to obtain an efficient mechanism for photosynthesis.

“Efficiency” tends to bring to mind impersonal systematization which emphasizes utility, but to me, researching self-organization, efficiency also means systems acquired over long periods of time by living things in order to survive, and in this sense, it is a very natural phenomenon. The convection of Euglena may also be a system which is inherent in them in order to live efficiently. It is possible that this efficient mechanism of existence may become apparent through the study of self-organization. By the artificial recreation of what we have learned, we hope to create new solutions to energy issues.

For the realization of a truly sustainable society

Through studying the photosynthesis of plants, we have more or less clarified its mechanism. However, it is questionable whether or not we have grasped its essential nature. For example, there is a certain regularity in the arrangement of photoreceptors in plants, but we have not discovered the reason for this. By approaching the essence of their self-organization in the area of photosynthesis, which is surely a technique that plants have used to survive until the present, and focusing on the efficiency which they have obtained, there should be opportunities for us to find new possibilities. It is very important that we use the earlier tendencies towards a brute force approach to renewable energy as a chance for reflection, learn from the photosynthesis mechanisms of euglena and plants, and discover and incorporate their efficiency.

The self-organization phenomena possessed by living things, to which we are finally beginning to pay attention, are rich in hints which can help us to realize a truly sustainable society.