The Negative Effects of Rapid Depreciation of the Yen and the Bank of Japan’s Policy of Quantitative Monetary Easing -A Need for Well-Balanced, Flexible Monetary Policy Management-

There are two fundamental issues behind the recent rapid depreciation of the yen, which has had impacts on areas including our daily lives and business activities. One of these consists of the massive deficit in Japan’s balance of trade and the shrinking of its current account surplus. The other concerns differences in economic conditions and monetary policy directions between Japan and the United States. The recent acceleration of depreciation of the yen can be said to be due to the increasingly clear differences between monetary policy directions.

The Accelerating Depreciation of the Yen is Due to Differences in Monetary Policy Directions between Japan and the U.S.

There are two fundamental issues behind the recent rapid depreciation of the yen, which has had impacts on areas including our daily lives and business activities. One of these consists of the massive deficit in Japan’s balance of trade and the shrinking of its current account surplus. The other concerns differences in economic conditions and monetary policy directions between Japan and the United States. The recent acceleration of depreciation of the yen can be said to be due to the increasingly clear differences between monetary policy directions.

On October 29 the U.S. announced an end to the third round of quantitative easing (QE3). While it would maintain a zero interest rate policy for a “considerable time,” it would suspend new supplies of funds. In contrast, Japan followed the unprecedented easing policies begin in April 2013 with a surprise announcement on October 31 of additional easing. The Bank of Japan’s announcement included (i) expanding the increase in the supply of funds (monetary base) to approximately JPY80 trillion over one year (for an addition of JPY10-20 trillion), (ii) increasing the amount of Japanese government bonds (JGBs) purchased to approximately JPY80 trillion over one year (for an addition of JPY30 trillion), and (iii) increasing the amounts of exchange-traded funds (ETFs) and Japan real-estate investment trusts (J-REITs) purchased. The stark contrast in these policy announcements made only two days apart had a massive impact on the foreign-exchange markets.
Another spur to depreciation of the yen was provided by the fact that U.S. employment statistics announced on December 5 exceeded market expectations, leading to the view that the U.S. economy was strengthening, which led to expectations of an earlier increase in interest rates and, in turn, to a decrease in the value of the yen on international currency markets in anticipation of such a development.

While the depreciation of the yen is said to have positive effects on the Japanese economy as a whole, recently those positive effects have been lessening while harmful effects have become apparent. First of all, despite the progressive depreciation of the yen growth in exports (by volume) remains sluggish. Reasons for this include progressive shifting of production facilities overseas, centered on the automotive industry, the fact that the prioritizing of improving earnings on product with high levels of competitive strength has meant that their prices in overseas markets have not fallen much despite the depreciation of the yen, and decreasing competitive strength in products such as home electronics and information and telecommunications devices. Even if the yen’s depreciation has improved earnings of major export manufacturers, it has not resulted in an export-led economic recovery. Instead, it is having highly negative effects on companies serving domestic demand with large volumes of imports, small and medium-sized enterprises (SMEs), and households, due to rising prices of imports and raw materials. There is an uneven distribution of the costs and benefits of the yen’s depreciation, and this disparity grows the more the depreciation advances. What’s more, real depreciation of the yen is advancing even more than seen in the currency’s depreciation vs. the dollar. A look at the real effective exchange rate (calculated by the Bank for International Settlements [BIS]), an indicator of the overall value of the yen, shows that it is at its lowest level in the past 40 years right now.
In addition, the speed of the depreciation is too fast. The exchange rate on November 14, 2012, the starting point of Prime Minster Abe’s Abenomics (i.e., the date former Prime Minster Noda announced the dissolution of the House of Representatives) was USD1 = JPY79.90, while the rate to the dollar was JPY101-102 in August of this year. The accelerated depreciation since this fall led to rates as low as JPY121 level to the dollar in December. It would appear that even Japanese business, which have learned how to adapt to exchange-rate fluctuations, are unable to keep up with the pace of this change.

It is Doubtful Whether Additional Easing was Necessary 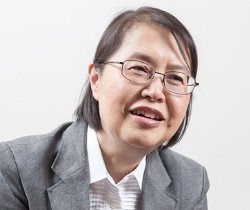 The reason for the additional easing by the Bank of Japan that brought about the depreciation of the yen was the slowing of inflation as a result of low crude oil prices. The BOJ has set an inflation target of achieving a 2% in terms of the year-on-year rate of change in the consumer price index (not including the effects of fresh food prices and consumption tax hike) in fiscal 2015 as an indicator of overcoming deflation. Considering the drop in crude oil prices to be undesirable for purposes of achieving this target, it embarked on a policy of additional easing. While the BOJ said that it had no intention to induce depreciation of the yen, it was expected that if the value of the yen on international currency markets did fall as a result of the additional easing then rising prices of imports would be able to offset the effects of falling crude oil prices.
While it is true that it would be desirable to overcome deflation, when viewed from a somewhat longer-term perspective a drop in crude oil prices would be likely to have a positive impact on the economy, eventually pushing prices upward (i.e., overcoming deflation). It is doubtful whether there was any need to adhere to achieve the inflation target for fiscal 2015 as to diminish this positive effect on the economy. Probably it would have been better for the Japanese economy to enjoy the benefits of lower crude oil prices directly. What’s more, since OPEC failed to agree to reduce oil production on November 27 crude oil prices have fallen rapidly, increasing the downward pressure on prices. I fear that the BOJ may continue to implement additional easing policies aimed at depreciating the yen (and increasing the prices of imports as a result).

Concerns about Decreased Liquidity in the JGBs Market, Relaxation of Fiscal Discipline, and an Even More Difficult Exit

The BOJ’s purchase of large volumes of JGBs involves another major issue as well. Under the policy of additional easing, the amount of JGBs purchased per year of JPY80 trillion greatly exceeds the annual budget deficit (i.e., amount of new financial resource bonds issued, roughly JPY40 trillion). It has been pointed out that this leads to significant downward pressure on the interest rates on JGBs and has side effects on the market such as decreased liquidity in the JGBs market. There also are concerns that this could weaken fiscal discipline and delay fiscal consolidation. Some even have argued that the purchase of large volumes of JGBs by the BOJ effectively constitutes the fiscal deficits financing.
In addition, if the BOJ’s assets grow further due to additional easing, then an exit strategy from policies of easing after overcoming deflation would become even more difficult. The BOJ’s monetary base is projected to break through the level of JPY350 trillion at the end of 2015, growing to about 70% of GDP. This is much higher than the level of roughly 20% maintained by central banks in the U.S. and Europe. The longer policies of easing continue the more their degree will increase, and the delay in increasing consumption tax would appear to increase its likelihood.
While an exit strategy needs to be advanced carefully so as not to generate market disturbances, as a result of additional easing it is likely that it will take considerable time until the exit is complete (i.e., until normalization of the size of assets). There also is a possibility that the interest rate on JGBs could rise substantially if the BOJ does not buy them. For purposes of avoiding such a situation as well, it is essential to advance fiscal consolidation before easing comes to an end.

It must be said that such contradictions and negative effects point to a dead end in policy. They require revisions of policy in a manner that would not undermine the credibility of the BOJ, such as revising the inflation target or making it more flexible. Specific examples would include (i) extending the period of time over which the target would be achieved or (ii) shifting to comprehensive assessment that include other indicators as well. Probably developments that cannot be controlled by the BOJ’s monetary policy, such as the substantial drop in crude oil prices, should be turned to an advantage in moving ahead with making policy more flexible. There is a need to implement more well-balanced monetary policy.
At the same time, the government needs to lessen a reliance on monetary policy and advance the “third arrow” of the growth strategy, in particular by moving to improve productivity and competitive strength and stimulate the economy through bold deregulation.

Note: Quantitative easing and purchase of JGBs by the Bank of Japan: The BOJ’s policy of quantitative monetary easing is a policy of increasing the supply of funds (monetary base; i.e., cash in circulation plus current account deposits in the BOJ) through payment for expanded purchases of financial assets such as JGBs by the BOJ on the open market. As a result of such payments, the balances in financial institutions’ current deposits with the BOJ increase.