A region is affected in a multitude of ways depending on what location an industry chooses for its site. Not to mention the effect on employment, the influence on the surrounding environment, including land use and the use and application of local resources has on the regional economy and social living, is far from insignificant. Of course, location strategy is extremely important for a business too. This has a major effect on various conditions, including securing human resources, technical innovation, and costs. Accordingly, industry with its roots in the region has to architect a strategy with the provided location conditions.

A region is affected in a multitude of ways depending on what location an industry chooses for its site. Not to mention the effect on employment, the influence on the surrounding environment, including land use and the use and application of local resources has on the regional economy and social living, is far from insignificant. Of course, location strategy is extremely important for a business too. This has a major effect on various conditions, including securing human resources, technical innovation, and costs. Accordingly, industry with its roots in the region has to architect a strategy with the provided location conditions.
Regional geography directly places its research into practical activities in regions such as local policy, industry location/distribution, and economic development of local towns/areas. In other words, it is a field of learning that analyzes economic effects from a regional perspective. Within that, the topic of my research is rural community theory, employing observation and field work to look into how societies in mountainous regions establish an economic base from which to support and further life.

When a disaster occurs, it often offers insights into the situation of a regional society. The recent damage brought about by the typhoon hitting Izu Oshima is one such example. The Izu Oshima area is not only susceptible to typhoons and volcanic eruptions, it also experiences frequent earthquakes. When the Miharayama volcano eruption took place in 1986, the islanders all came together to help everyone evacuate safely, saving them from any casualties. The “Disaster safety island” had proactively organized evacuation training.
I myself have visited the island on multiple occasions with my students and this summer we went there for a field trip to research how towns develop disaster prevention strategies. In the aftermath of the Great East Japan Earthquake the Oshimacho Disaster Management Division was busy readdressing the town’s disaster prevention policy formulated by Tokyo Metropolitan Government, working mainly on countermeasures against earthquakes and tsunamis. At the same time, they were moving to get a community wireless system installed linking houses in the event of a disaster. A Camellia oil producer who regularly visits the area explained to the students how the villagers rely on camellia oil for everyday management of the mountains. People were also worried that landslides could occur more easily as trees have not taken roots deeply. It was at this time when they fully understood that they were not controlling their natural resources sufficiently that the area was struck with a rare, large-scale typhoon.
Actually visiting the area after hearing reports from various news sources, you get a different perspective of the current situation. Listening to the people living at the site you are able to reflect on things while standing in their shoes which, in my mind, is what is necessary to affect activity in the region and in turn produce a stronger Japan.

Today’s students have the power to change Japanese society

There is a town in Gifu prefecture which I have paid many visits to over the years. It is a so-called “marginal village” where sixty percent of the population is made up of elderly citizens. As people continue to move out of cities, there has been a baby boom with 6 children having been born in recent years. The farming area where these new residents work was originally a tourist farm created when municipalities merged. However, a company from another area that the prefecture put in charge of running the farm pulled out when it became unprofitable. At present, a new company set up with local people’s money is working on restoring the farm.
I took the students along to this village to see how its everyday operations, while helping to clean the agricultural waterways. Nowadays the students venture out without me needed to give them any instruction. They had also being helping with rural study experience for children when they started to look into organizing a similar project for adults. These interactions have led to a deepening of our relationship, with the locals offering to present Meiji University with a Chainsaw carving sculpture of the Meijiro owl, the mascot of the university. If this rouses students’ interest, understanding, or inspires them in some way, I think it can only lead to a brighter Japanese society. If I take students to observe these places far out in the countryside, they continuously find new things, saying “Wow!”, or “That’s cool!”, and surprise me with ideas such as the “Adult rural study experience”.

Promoting regions by bringing together intrinsic and external power 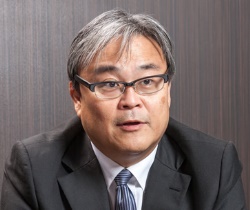 To promote growth, it is important to make the most of the area’s natural resources. Of course, resources are by no means limited to forest resources. However, forests can be found in every mountainous region in Japan. If utilized well, management of resources over a wide area can be realized and can lead to ecosystem integrity. In addition, considering the concept of a small-scale distributed energy society, which has been receiving a lot of interest recently as well, the use and application of forest resources also has the potential to greatly change the economies and societies of regions located in the outskirts of Japan.
So how do we make use of these regional resources to affect regional promotion? In order to consider that, we must first look at our country’s regional structure and discuss the various conditions of a region. At the same time this has to take up the intrinsic management power of the people living in the area. There are schemes that people living in areas affected by the Great East Japan Earthquake are trying to set up themselves. It is necessary to come up with ideas to support the future of the disaster area.

At the moment, there are all types of activities communicating Japanese culture and traditions to the rest of the world. However, besides just Japanese food, there is much more that we can introduce to the world. No matter how deep away in the mountains, immersed in snow, people still live among beautiful surroundings and the food they eat is more than delicious. I wonder if this aspect of our country would prove interesting to foreigners.
Big cities play an integral part in our society but in my opinion if surrounding societies change, a new Japanese society which people will enjoy living in would be born. Instead of overconcentration, diversifying will make it possible to see Japan from the outskirts of society. I think that we will soon have these kinds of opportunities.
Unfortunately, the furthest reaches of our land are facing an impending crisis. My hope is that students can see how Japan is now, as well as going overseas. Beautiful stone walls that separate rice terraces in the mountain villages would be lost if it wasn’t for agriculture. However, the current state of Japanese agriculture is jeopardizing the existence of rural farms. In order to realize that losing these rice terraces would be a tragedy, one must recognize their beauty. In reality, not all of these rural communities are under threat. The majority of them have the ability to keep going themselves. What is important now in my opinion is to research what sort of conditions particular areas can survive in.
It is necessary to build a social framework to restructure regional economies and community cultures in these outskirts of the country by way of expanding the application and use of the regions’ resources. In addition, I believe that looking upon national land policy with these areas in mind is an important topic for research.