Debating during my youth was the starting point 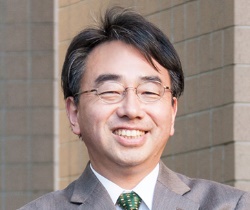 The subject of my research is “Rhetoric as the art of public persuasion.” First off, I would like to begin by explaining how I came to decide my research field. Dreaming of becoming proficient in English, immediately after entering college, I joined an English circle called the “English Speaking Society” (ESS). I chose to join the Debating Section. It was only in my second year that I participated in my first debate contest, and I don’t recall ever getting past the elimination round that year. In my third-year, I acted as the debate section chief, so I worked hard at what I could. In an autumn tournament we made it through to the Eastern Japan Finals only to lose in the last stages. From that disappointment, after spending three years working after graduating college, I made up my mind to go to the University of Kansas Graduate School of Communication Studies while working as a debate coach for American university students.

I went to study in the U.S. primarily because I wanted to study debate under the wing of the very famous debate coach, Dr. Donn W. Parson at the University of Kansas. I wrote my master’s thesis on the comparison of Japan-US university student debating activities. Debate is a form of communication in which participants argue a topic from different viewpoints. It is also one unit of the branch of learning called “Argumentation,” which places the process of discussion and persuasion as the subject of its research. After these, the subject extends into my current field of research of “Rhetorical Criticism” and “Persuasive Communication”.

I have experienced myself on a number of occasions about just how important communication is. As mentioned before, after graduating from college in Japan I spent three years working in Osaka. During that period, my job was working as a salesman for a contact lens company. I started off using logical reasoning in my work but my clients did not like my style of communication in the first year. As a means to break away from my reliance on logic, I transferred my efforts into trying to get along well with clients. By building a rapport with clients, my business talk came to get along with them, and in the second year my performance jumped rapidly. I managed to improve my sales through so-called “Dos and Don’ts,” and I found such practice extremely significant for “Persuasion Communication”.

From “Persuasion” to “Consubstantiation” 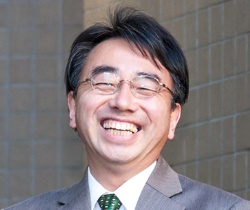 In Communication Studies, I have specialized in the research of persuasive language, or Speech communication. 2300 years ago the philosopher Aristotle advocated the use of rhetoric as the art of public persuasion in Ancient Greece. This thinking employed rhetoric as a tool in persuasion. In pre-modern times, top-down decisionmaking makes leaders of society look down upon the general people as a target for persuasion. Everyone followed those who are in higher positions. Accordingly, rhetoric would have been an effective tool in persuasion. However, as the world developed into one in which individuals could freely assert their opinion and their conflicts of interests and rivalries arose, rhetoric became a less versatile tool in persuasion. In the 20th century, an American literary critic Kenneth Burke defined rhetoric as “the use of language as a symbolic means of inducing cooperation.” Our current Prime Minister Shinzo Abe provides us with a good example of this. Before his resignation, Mr. Abe originally served only a year as Prime Minister since he had been put into a politically difficult situation. By reflecting upon the matters now, he admits that there was a gap between his own personal ambitions and what the public wanted him to accomplish. In fact, currently there are still a large number of the Japanese public who support him. What this displays is that the Prime Minister has developed what was previously no more than persuasive rhetoric into sympathetic rhetoric possible of inciting cooperation. Going further than this, it could also be said that people like Mr. Abe, who have experienced setbacks and received a second chance, are more likely to succeed than elite members of society who are apt to look down on others.

At present, the world is facing a multitude of problems. A keyword when combatting these will be Critical Thinking, a basis for communication and discussion education. In addition to critically analysis, other necessary elements are as follows: proposal of appropriate solutions, comparative analysis of the proposals, and trial and implementation. So far, Japan’s education system has left out critical thinking practice, and has placed too much importance on knowledge. As a result, in order to attain power in critical thinking a complete overhaul of the Japanese education system is necessary. One of the factors contributing to this style of education, which lacks the ability to think proactively, is the issue of so called “Working Poor.” Behind the expansion is, as a result of the collapse of the social narrative of effort and advancement in life, there is a trend among the youth not to try hard. Needless to say, such values as doing one’s best, friendship, trust and hospitality are ones shared by the whole world. They need to be taught to hold onto “Dream” of their own. At the foundation of the working poor problem is in the desire to avoid taking a risk. Therefore, if I were to offer advice to young people, my words would be “Challenge.” To challenge is to take a risk in hope of building a better future. If we put in the effort to tackle a problem, we will surely feel satisfaction and this will serve to our advantage. In addition, we will gradually build up interpersonal networks as there are always those who would help us push to our goal. It is said that the coming generation will require “Human Power” to survive and this is fostered from ability, networking skill, and experience.

We shouldn’t allow ourselves to hamper our own potential. Imagine if our life was a video game. Everyone is bravely trying to get up to the next level. When we do, we feel happiness and satisfaction. These experiences push the player onto the next challenge. This is no basic difference in our life. In fact, we are the main character in our own game of life. In this new era of globalization in which the world and the people change at an accelerated pace, such principles as just following others or blind obedience to the authority are no longer valid. A proactive person with innovative mind and broad network of resources is now called for. However wary of the outcome may be, we need to continue taking risks in the hope of achieving a successe.

* The information contained herein is current as of October 2013.
* The contents of articles on M’s Opinion are based on the personal ideas and opinions of the author and do not indicate the official opinion of Meiji University.

“Toxic” schools – overlooking the rights of children and ...

Don’t lose the sight of objectives: being successful in ...

Beyond the pros and cons of the current introduction of ...