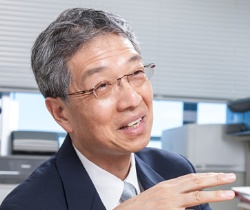 Japan’s Disaster Prevention Day, September 1, marks the date of the Great Kanto Earthquake in 1923. More than 100,000 people lost their lives in that disaster, but a detailed look at the records from that time shows another aspect of the natural disaster. While it is true that the 7.9-magnitude Great Kanto Earthquake was a massive earthquake, most of the deaths were due to fire. The fierceness of the resulting fires is due in part to the fact that the vibration struck at lunchtime, but a typhoon near the Noto Peninsula also caused strong winds to blow across the entire Kanto region. In other words, behind the high number of victims was the combination of the natural disasters of an earthquake and a typhoon. Looking back even further into history, damage from the massive eruption of Mt. Fuji in the Hoei era during the Edo period was exacerbated by an earthquake. We can see the same thing in the March 11, 2011 Great East Japan Earthquake. Although that was an enormous 9.0-magnitude earthquake, damage from seismic vibrations themselves (such as deaths caused by collapsing buildings) was limited. Most people who lost their lives were engulfed by the earthquake-caused tsunami along the Pacific Ocean coastline. This was flood damage, as the earthquake and tsunami combined to result in a tragic natural disaster.
While the earthquake awareness of the public seems to have risen steadily since the Great Hanshin Earthquake in 1995, we must note the need to be ready for natural disasters caused by earthquakes or separate natural disasters occurring at the same time as earthquakes in addition to readiness for earthquakes themselves. The extent of the damage from the Great East Japan Earthquake on March 11 also demonstrated the outstanding level of seismic technology in Japan, which helped buildings stay erect in the earthquake. As a country that experiences frequent earthquakes, Japan has made progress on seismic technologies for buildings and houses to keep earthquake damage to a minimum. It would be no exaggeration to say that the history of architectural structures in Japan has developed in parallel to its seismic technologies, which have reached the top level in the world. The current Building Standards Act, which underwent large-scale amendment in 1981, calls for a high level of earthquake resistant design that has served as a model for other countries around the world. On the other hand, some concerns have been exposed since the Great East Japan Earthquake.

The Danger in Resuming Operation of Nuclear Power Plants

Nuclear power has been an issue since the Great East Japan Earthquake. The accident at the Fukushima Dai-Ichi Nuclear Power Plant was not caused by structural collapse due to seismic vibrations. Instead, it was a nuclear accident involving a meltdown and leakage of large volumes of radiation that occurred when the reactor became dysfunctional as a result of flooding by seawater, caused by the massive tsunami. Feeling a sense of crisis following the disaster, the Japanese government suspended operation of all nuclear power plants in the country and prepared new safety and regulatory standards that were enacted in 2013. Plans call for nuclear power plants that clear the new standards to resume operation.
The new safety and regulatory standards call for increased levels of earthquake resistant design to ensure the safety of nuclear power. They raise the scale of anticipated seismic vibrations and make structural resistance to such vibrations a necessary condition for resumption of power plant operation. But will these truly ensure safety? The Fukushima Dai-Ichi Nuclear Power Plant was struck by an unanticipated tsunami. Furthermore, if an earthquake greater than the anticipated scale of seismic vibrations were to cause massive damage, then probably we should not call the results a natural disaster. Nothing should be left unanticipated when it comes to nuclear power, and it is difficult to ensure absolute safety. Furthermore, since most nuclear power plants in Japan are located on the coastline they always face the risk of tsunami. Probably we should give careful consideration to not just resumption of operation of nuclear power plants but their presence itself, to prevent natural disasters from becoming human-caused disasters.

Protecting Oneself from Indoor Disasters

Next I would like to consider prevention of earthquake damage. Generally, the earthquake resistant design of buildings and houses is intended to prevent major damage from medium-sized earthquakes, which could occur multiple times during the period of building use, and to protect the lives of occupants by ensuring the building will not collapse in a major earthquake, which could occur on very rare occasions during the period of building use. For this reason, it has focused on improving the strength and ductility of the key structural elements of columns, beams, slabs, and walls. As noted above, Japan has achieved a very high level in such seismic technologies, and there is little risk of collapse in the case of a building that satisfies the standards of the current Building Standards Act. In light of this fact, one contemporary subject of concern with regard to earthquake resistant design is indoor damage. Many of those who died in the Great Hanshin Earthquake in 1995 were buried under fallen ceilings and overturned furniture. Thus, nonstructural elements (secondary elements) such as furniture and ceilings can become lethal. We need to use seismic technologies to address indoor disasters too, through means such as preventing the overturning of furniture and avoiding falling ceilings and flying shards of glass.
I studied for three years at a manufacturer developing implements to prevent furniture from overturning. These implements can withstand seismic vibrations of Japan Meteorological Agency seismic intensity of seven, simply by affixing them to the wall to keep furniture in place, without use of screws or other hardware. Currently I am researching on building health monitoring. This refers to periodically examining a building and keeping records of any changes in its seismic performance, just like a human being’s health checkups. I would like to see this approach adopted in buildings that are closely related to the lives of the public and for which high levels of seismic performance are required, such as police stations, fire stations, public facilities, broadcast stations, and hospitals.

The Importance of Restoring Pride in Craftsmanship 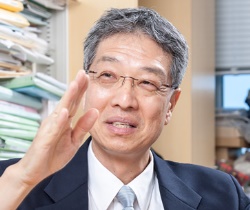 The final thing I would like to point out concerns structural issues faced by the construction industry. In recent years, a shortage of technical staff (craftspeople to work on construction sites) has been identified. According to a survey by the Ministry of Health, Labour and Welfare, there are less than 2000 teenage carpenters in Japan nationwide, and the next generation of craftspeople is decreasing rapidly in number. Even if seismic technologies are enhanced and advanced, if there are no craftspeople who possess high levels of construction skills then it will not be possible to build robust structures. Behind the decrease in craftspeople is some structural issues in the industry. The construction industry has an hierarchical structure consisting of general contractors and subcontractors. To secure revenues amid overcompetition, construction companies are demanding cost cutting on the part of subcontractors. As a result, the craftspeople who work on construction sites continually earn salaries that definitely cannot be described as high. Another factor driving young people away from the industry is the fact that work on construction sites appears to them to be hard, dangerous, and dirty. Jobs and workplaces that the next generation does not find attractive will collapse sooner or later. For this reason, from the perspective of building structures some people doubt whether it will be possible to realize construction that can secure sufficient seismic performance. Until just recently, craftspeople took pride in their work and understood its value. Construction needs to restore this pride in craftsmanship. Doing so requires that the entire industry begin reforms aimed toward structural improvements. The idea that cheaper is better does not apply to buildings holding people’s lives and property. Good performance should be reasonably paid. Shifting to the view that more expensive is better could restore this pride in craftsmanship and help create workplaces attractive to the young people of the next generation.
I have studied seismic technologies and earthquake resistant designs of buildings for many years. Certainly it is true that Japan has developed a high level of seismic technology protecting the lives, and the safety of building occupants. However, one cannot say that all buildings are 100% safe. Sometimes the damage caused by nature clearly surpasses human understanding. I believe that awe and respect for nature are the basis of disaster prevention.

* The information contained herein is current as of August 2014.
* The contents of articles on M’s Opinion are based on the personal ideas and opinions of the author and do not indicate the official opinion of Meiji University