“Mathematics is a tool for problem solving.”

Mathematics is not an idiosyncratic discipline The relationship between mathematical science – in particular, mathematics, which is at its core – and society tends to become obscure, mainly due to mathematics’ characteristic of being difficult to understand. Additionally, when we tell of mathematics, it is often perceived purely as one particular field in academic research, and there is a misunderstanding that it has little connection with other fields. Perhaps for that reason mathematical science is held in low regard in Japan and it is mockingly referred to as the “forgotten science.” However, mathematical science is the foundation of science and technology today and it would not be an exaggeration to say that disregard for mathematical science would directly link to the decline of Japan as a technological powerhouse. Against such a backdrop, my mission and that of other mathematicians is to clarify the role that mathematical science plays in society and to pursue its possibilities. I often hear stories of high school math teachers being asked by students, “What is the point of learning math?” and the teachers only being able to respond with answers such as “because it is useful for university entrance exams.” For sure, other than calculations

Mathematics is not an idiosyncratic discipline 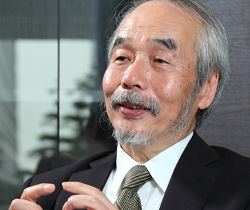 I often hear stories of high school math teachers being asked by students, “What is the point of learning math?” and the teachers only being able to respond with answers such as “because it is useful for university entrance exams.” For sure, other than calculations necessary in daily life, mathematics as it stands today is one of the important entrance exam subjects and it acts as sort of litmus paper to divide the arts and sciences. However, taking it out of the context of university entrance exams, mathematics is present in every field from natural science and engineering, of course, to economics, art, life, language, and philosophy.

Taking on a wide range of research subjects in three departments

At the Department of Mathematical Sciences Based on Modeling and Analysis we use modeling to express various phenomena that occur in the real world as mathematical equations and work out the identity of unseen phenomena by conducting computer simulations. We also nurture the ability and talent to apply these mathematical models to various fields.
At the Department of Frontier Media Science we aim to build human-friendly computer systems. At the root of the term “virtual reality,” which has found widespread use in recent years, is the goal of having people recognize things through the use of computers in the same way that they recognize things through the sense of sight. The purpose of this department is to explore ways to achieve media technology that let people have fun and be happy.

At the Department of Network Design, we research optimum (effective and economic) networks, such as smart grids and smart cities. We aim not only to simply design and operate such networks, but to realize a smart society that considers optimization even from the viewpoints of human safety and environmental issues.

Mathematics, which has its origins in ancient Greece, was established around the same time as philosophy, and the two disciplines have shared the same goal. It is well known that the word philosophy derives from the Greek “love of wisdom.” The English word mathematics comes from the Greek μάθημα (máthēma), which means “knowledge, research, to learn,” and does not necessarily point only to calculation.

Mathematics in ancient times was born around the same time mankind took its first steps to cultivate the earth. Broadly categorized, three types of mathematics emerged and developed: the calculation necessary to divide crops and conduct transactions, surveying necessary for farm land management, and periodical astronomical events and calendars that determined the seasons for farming. These became the basis for mathematics as it is today, which researches structure, space, and change.

Until today mathematics has undergone various expansions and many mathematicians have raised challenging issues. In Western countries, there are national and other projects involving integrated research between mathematics and other disciplines, and mathematicians are working in a wide range of activities in industrial areas.

In the fields of information science and life science, which are showing remarkable development today, the bio-informatics, which integrates the above two fields, is becoming increasingly important. In April 2003, the Human Genome Project was completed and its results published on the internet. This enormous amount of life information is expected to contribute greatly to determining the causes of illnesses and development of drugs. It is said that mathematical science is essential in analyzing this vast amount of data and creating a new mathematical model. In a survey targeting Western universities and research institutions, in response to the question “what does science today need?” many said “mathematical science is indispensable.”

While it is crucial to improve the relationship between technology and mathematical science, it seems that in the tense dialogue between mathematicians and philosophers, there are sparks of knowledge and spirit that people today tend to forget. Therefore, I believe it is also important to cultivate an education that transcends the borders of humanities and science.

The advancement in discrete geometric analysis 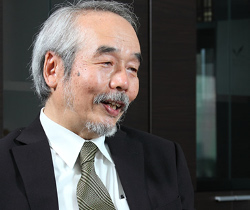 My own central research field currently is the new field of discrete geometric analysis; this applies the ideas of global analysis, which became an area of active research in the latter half of 20th century, to discrete objects. In other words, I use the ideas of geometry and analysis as well as the theory of probability and number theory to study objects that seem to exist independently of one another at first glance.

So how does such mathematical research relate to the real world? Take networks, for example – information and telecommunication networks such as the internet are a typical example. Society and human bodies form various networks. Commercial transactions, distribution, and neural networks – these are all things we can call networks. My particular interest is in the design of crystal structures. Crystals are made from atoms that bond to one another through some kind of force. This is nothing but a three-dimensional network. Mathematical science has the power to respond to such various targets through an integrated method.

The strength of mathematical science is its versatility, in the sense that it is widely applicable to research that started in areas that seem at first glance completely different. In general, the lifespan of high quality mathematical research is long. Just as the research of prime numbers, which has a history of more than 2,000 years, is applied to security and the theorem of linear algebra to search engines and inter-industrial relationship, even if you cannot find a target to which you can apply the research initially, it will become an excellent problem solving method at some point. With such expectations, I would like to demonstrate a new form of mathematical science to students and to society.

* The information contained herein is current as of June 2013.
* The contents of articles on M’s Opinion are based on the personal ideas and opinions of the author and do not indicate the official opinion of Meiji University.