Now, focusing on public libraries, which have been changing as a feature of regional revitalization

Public libraries have image as a place to borrow hobby and educational books or for students to study. Some of them have recently become a key part of local information-sharing and regional revitalization along with expansion in their functions and roles. Today, how have public libraries been evolving and what is behind this evolution?

As IT is turning to be infrastructure of society, more and more private information is being collected in the background 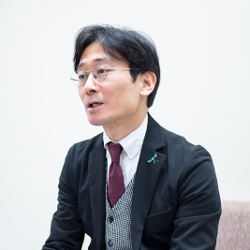 One of the advisory panels formed by the Ministry of Education, Culture, Sports, Science and Technology, Study Group of Library’s New Directions, provided a report named the Future Vision of Libraries: toward Information Hub to Support Communities (Report) in 2006. Since this report, a movement has been seen to position public libraries as facilities necessary for regional development. This is due to three factors. One of them is prolonged economic stagnation after the collapse of the bubble economy. Companies have been forced to try out new projects or business opportunities, not only just following a conventional approach. This could not be done without knowledge and information on law, tax practice, and patents; accordingly, public libraries have been required to offer requisite information and data to small and medium companies which have suffered an information gap compared with large companies. Another factor is the trend of decentralization that started in the late 1990s. While local authorities have been required to form unique policies according to regional situations, local residents have had more opportunities to be directly involved in administration and formation of civil society. Thus, both actors have needed administrative data, as well as a variety of relevant information and data. Public libraries have started responding to those needs through reference services. In offering the services, they have been required to serve as comprehensive information hub with the utilization of not only books but also articles of magazines, newspapers, and Internet-based information. Especially for local residents, public libraries have been positioned as facilities to assist in their autonomous judgments. The third factor is aging population; there has been growing demand from people for basic information on “medical care” such as that on illness, injuries, and nursing care, which has increased along with our society’s aging. In recent years, physicians have been required to obtain informed consent before carrying out treatment. To fully understand the explanations by physicians, patients and their families also need to retain knowledge of medical care and pharmaceutical products and information on medical institutions and systems. Such information has begun to be provided by public libraries.

Therefore, public libraries have become information hub to assist in solving living problems and local issues. At the present day with the developed Internet technology, many people tend to think that they can find out whatever they want to know by searching the Internet using a computer or smartphone nearby. Conversely, people cannot gain adequate information if they cannot perform an accurate search. A search by random keywords may provide only partial information, being unhelpful in acquiring systematic knowledge. Perhaps, people have renewed their recognition that they can obtain data and information serving their purposes and broaden their knowledge at public libraries where they can use the help of librarians.

These background factors have changed the functions of public libraries. One of their new functions is the Designated Manager System introduced along with a revision of the Local Autonomy Act in 2003. This system, which is being introduced to public libraries, is expected to improve services and reduce costs by utilizing the knowledge and ingenuity of private business operators entrusted with operation and management of public facilities. The Japan Library Association’s research reveals that as of 2015, 469 municipal libraries (14.6%) have introduced the system. Introduction of the system brings benefits including an increase in open days, speedy book lending/returning due to an installed self-checkout machine, and an increase in the percentage of qualified librarians. Many of you may have seen libraries with café, etc., as a hot topic, in a report. In view of this, the introduction seems to benefit users through improved services. However, in fact, in some communities local residents are launching a campaign against the Designated Manager System.

The primary problem is that the system mainly aids to reduce costs. As local authorities seek lower-budget operations, designated managers end up trying to save costs. Contracts with designated managers should be concluded for a fixed term, such as three-five years, and reviewed according to the Local Autonomy Act; the continuation of their operational management is not secured. Therefore, designated managers cannot guarantee stable employment for librarians working in the libraries. Instead, in order to reduce costs, they often employ fixed-term, non-regular librarians for lower wages, which has become a factor in producing the so-called government-induced working poor class. Secondly, designated managers cannot expect operating revenues through the libraries, since the Library Act prohibits collection fees for entry and using books at public libraries. Thus, there are some designated managers who try to benefit from selecting and purchasing books from bookstores selling relatively new used books. However, as a result, there may be many books that designated managers can easily purchase and fewer books that users would want to read. This keeps libraries from serving a primary function in selecting appropriate books, which is problematic also from the standpoint of the protection of the people’s right to know. Moreover, even though designated managers are required to carefully protect and maintain users’ personal information about the books they borrowed, it is uncertain whether a management system is defined well. Under such circumstances, it becomes difficult to offer high-quality services with medium- to long-term perspectives. This is why some communities have objected to the introduction of the Designated Manager System to public libraries. Indeed, by fiscal 2016, 14 libraries have gone back to direct management by local authorities. Public libraries, which are expected to play an even greater role as information hub, should examine how they ought to be with the help of comments by local residents.

A new future vision of libraries has started to draw attention

There are communities where a local authority and local residents have worked on urban development centered on a public library. Obuse Town, Nagano Prefecture, set up a committee to establish a library with municipal residents, and opened a municipal library in 2009. It launched one of its services, “Machiju Toshokan (Library all over the town)”: an initiative to encourage communication with passers-by through books that are lined up in front of the houses or the stores by people who have a great number of books or have thought of donating books to the library. This has exerted a significant economic ripple effect in Obuse Town, which had originally been a tourist site, by attracting more visitors due to such actions. This initiative aims to utilize the public library, which is positioned as a space for local residents to participate in social activities for regional revitalization in cooperation with residents who join in efforts and projects of the library.

In addition, some communities promote urban development through a Public Private Partnership. Shiwa Town, Iwate Prefecture has worked on their “Ogal Project,” whose core is a group of multifunctional complex facilities. One of them is Ogal Plaza, a public-private complex with a community center, child care support center, farmers’ market, and medical care facilities, in addition to Shiwa Town Library. The library works together with those facilities; for instance, popup stands to introduce the library-owned recipe books for each ingredient are placed on the shelves for fruits and vegetables at the farmers’ market. This is intended to attract customers at the farmers’ market to the library and motivate people who have read recipe books to buy agricultural products. The library also has a section for relevant books to support agriculture and one where an agriculture-related paid database is available free of charge. In Shiwa Town, whose key industry is agriculture, the library has contributed to regional development through getting involved in the promotion of agricultural products in collaboration with the farmers’ market as part of its agricultural support services. To encourage more people to understand and use such services, the librarians of Shiwa Town Library visit farm households in order to explain the details of the library’s services and how to use them.

Public libraries have begun to serve communities also as information hub offering services for business solutions. From here on, local authorities’ responsible and proactive involvement in the operations of libraries for cooperation with local residents and collaboration with related organizations will draw attention as a new future vision of libraries.