The Intergovernmental Panel on Climate Change (IPCC), which carries out scientific assessment of global warming, has published its Fifth Assessment Report in installments from last year through this year. The report projects that the global mean surface temperature will rise by 0.3-4.8°C by the end of this century. Since it is thought that the mean temperature in the last ice age was only about 5°C lower than today, this means the possibility of a massive temperature increase over a short period of time, and it is thought that this will have not a few impacts on our society and way of life.

The Intergovernmental Panel on Climate Change (IPCC), which carries out scientific assessment of global warming, has published its Fifth Assessment Report in installments from last year through this year. The report projects that the global mean surface temperature will rise by 0.3-4.8°C by the end of this century. Since it is thought that the mean temperature in the last ice age was only about 5°C lower than today, this means the possibility of a massive temperature increase over a short period of time, and it is thought that this will have not a few impacts on our society and way of life.

To me it is particularly interesting that the temperature increase in high latitudes, chiefly in the Arctic, is projected to be larger than the global average. The Arctic is one of the regions most affected by warming, and the resulting effects will include massive changes to marine ecosystems due to a marked decrease in sea ice. At the same time, warming could be one trigger to expansion of the scopes of human habitation and activity. As American geographer Laurence C. Smith points out, today the Arctic Circle is attracting attention as a subject of development due to factors including the impacts of population increases and globalization in addition to warming.

What the “Arctic Age” will bring about 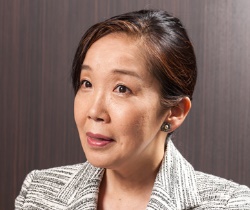 In his book The World in 2050: Four Forces Shaping Civilization’s Northern Future, Smith argues that as exploration of resources advances together with melting of snow ice in regions where until now only indigenous peoples had lived maritime shipping activities will expand, industries such as tourism and fisheries will be revitalized, and population will increase as well. In other words, it is projected that regions that people could not live in until now because they were so cold will become economically practical, and development there will accelerate. This is the coming of the “Arctic Age.” Activities in preparation for the Arctic Age are becoming more active in a variety of fields. For example, contracting ice in the Arctic Ocean could realize a new Arctic Ocean sea route connecting East and West. Further impetus to Arctic Circle development by a number of countries comes from the unexploited resources at the ocean floor. The Arctic Ocean is thought to be rich in petroleum and natural gas as well as mineral resources such as gold and nickel.
Such development of the Arctic Circle involves a number of concerns. Development in the Arctic might result in cities that consume massive volumes of energy and the infrastructure to maintain them, as when the former Soviet Union aggressively developed cities in Siberia. Already environmental degradation is advancing as a result of resource extraction in lands that until now had been inhabited only by indigenous peoples, such as the oil sands deposits of Canada. Today, as humanity begins to enter one of the few last remaining frontiers amid the massive tide toward the Arctic Age, perhaps we need to reexamine our way of life from a more primitive perspective. The way of life of Mongolian herders that is a subject of my research provides some useful suggestions for doing so.

Factors limiting human habitat include cold, dryness, and elevation. For thousands of years the herders of Mongolia have made their living without damaging the grasslands where they live and while consuming only minimal energy at the very boundaries of cold and dryness. In other words, the herders possess knowledge of how to live in near the anökumene (the domain uninhabited by humans) as a form of folk knowledge. This has given them a view of nature in which they trust things to the natural world, and while occasionally they have faced repeated loss of all their livestock due to natural disaster, in the end the grassland environment remains without being destroyed.
It is said that humanity has expended the ökumene (the domain inhabited by humans) by overcoming the anökumene. As seen in areas such as Arctic development, warming is leading humanity to take on the challenge of the anökumene once again. We might be able to put to use the traditional knowledge of Mongolian herders and the indigenous peoples of the north, who have been able to continue living in cold regions, to realize sustainable activities while keeping down in some way both energy consumption and environmental degradation in such regions.

Mass livestock deaths and the weather

I first became interested in Mongolia when I heard the news of a massive death of livestock due to snow damage. It was around the start of the 21st century. At that time I had been researching snowfall. I became interested in the snow damage in Mongolia in light of my studies of the relation between snowfall and climate. When I spent two years as a visiting researcher at the Institute of Meteorology and Hydrology, I soon understood that the mass death of livestock said to be due to snow damage had not been caused by snow damage alone. The livestock were unable to withstand the winter because they did not fatten enough in the summertime, due to decreased pasturage caused by a drought. In other words, in the years of mass livestock deaths the weather had resulted in the inability for sufficient grass, the livestock’s feed, to grow during the summer. The social background also included a rapid increase in numbers of livestock as privatization advanced following the collapse of socialism and the fact that many unemployed people had become inexperienced herders. I felt that measures to counter weather damage would need to look comprehensively at the weather throughout the entire year and the way of life of herders, which was deeply connected to the weather.
Since then, I have been involved in research aiming to examine the traditional way of life of herders living under severe environmental conditions, from a meteorological approach, and to help improve their resistance to disaster and their lives. I am grateful for the cooperative approach of the herders themselves, who also are very interested in my studies of knowledge such as ways of choosing warm places to spend severe winters, ways of using grazing land in each season of the year, and ways of processing livestock products, which are valuable foodstuffs. 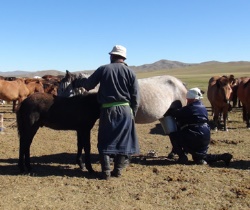 On the subject of traditional knowledge, I would like to look at the herders’ diet. Since they live in a cold, dry region, agriculture is limited, and traditional diet is centered on dairy products in the summertime and meat in the winter. During the wintertime they drink large quantities of a certain beverage as a source of vitamins and minerals in place of vegetables. This is fermented mare’s milk known by names such as airag or kumis. A source of hydration, energy, and vitamins, it is considered a complete food with high nutritional value, enjoyed by everyone from babies to the elderly. It is a refreshing beverage with low alcohol content and a faintly sour taste, a staple of the diet during the summertime, to the extent that in the districts where it is produced some people even subsist on it alone in place of food. Its flavor varies from household to household, and a wide variety of cultures have been passed down through the years. Its medicinal ingredients are attracting attention from across Mongolia and around the world. In the herders’ diet, it is one kind of traditional knowledge that has been handed down for thousands of years.
I visit Mongolia on research trips twice a year. While there, I live with the herders. I stay in ger (traditional movable residences) and eat the same foods as the herders. While use of solar cells has spread, their lives are lacking in conveniences compared to urban living, since they are far removed from the infrastructure of gas and water. Their hands are their greatest tools, and the way they provide for their housing, food, and clothing with their own hands is dazzling. As somebody accustomed to the modern conveniences who had forgotten how to use her own hands, this gave me a new understanding of the importance of the hands, and it made me realize how we waste energy and throw things away to save on manual labor. The knowledge of sustainable living possessed by the herders, who put the power of their hands to maximum use, might provide some new suggestions for us today, living in a time of warming.

* The information contained herein is current as of August 2014.
* The contents of articles on M’s Opinion are based on the personal ideas and opinions of the author and do not indicate the official opinion of Meiji University