Can the Renminbi be Termed an International Currency? – The Need to Strengthen China’s Financial System

The decision taken at a meeting of the Executive Board of the International Monetary Fund (IMF) held in November of last year (2015) to include the renminbi (Chinese yuan), the currency of the People’s Republic of China, in the basket of currencies making up the IMF’s Special Drawing Rights (SDR) was widely reported in Japan, as in other countries. China now ranks first in the world in terms of trade volume and second in nominal gross domestic product (GDP). I believe many people have a sense of alarm about the prospect of its renminbi as a world key currency. Nevertheless, its inclusion in the SDR basket does not mean that it will actually function as an international currency. There are macro-financial trends in China that should be paid more attention.

Significance of entry into the SDR basket 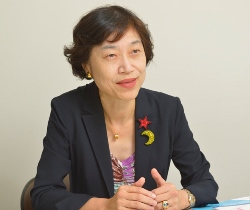 SDR value has been based on a basket of four currencies: the U.S. dollar, the euro, the Japanese yen, and the British pound.

Its value fluctuates in correspondence with the daily value of each currency. Every five years, the IMF reviews the composition of basket currencies forming the standard for the SDR rate. It was decided to add the renminbi to the existing four currencies in the SDR basket on the occasion of the review to be made in 2016. It should be noted, however, that its inclusion in the SDR basket does not mean that the renminbi will become an international currency like the dollar. The composition and valuation of the SDR is typically reviewed every five years to ensure it reflects the relative importance of currencies in the global trading and financial systems.

China’s fervent wishes for internationalization of the renminbi

China is considered to have fervently hoped for inclusion of the renminbi in the SDR basket. Considerable attention was garnered by a paper written in 2009 by the governor of the People’s Bank of China (PBC), who asserted that the SDR should be a key currency in place of the dollar. This may be regarded as akin to the idea of the Bancor (unit of account used to track international flows of assets and liabilities) advocated by John Maynard Keynes at the Bretton Woods Conference in 1944. The idea of internationalization of the renminbi is an extension of this thinking. The phenomena that appeared in the wake of the collapse of Lehman Brothers in 2008 are still fresh in the minds of all concerned. The liquidity of dollars was severely squeezed, and immense damage was done to international settlement transactions and trade finances. China may have thought that the institution of a global currency or internationalization of the renminbi would bring freedom from such troubles.

The IMF considers whether or not to include a given currency in the SDR basket on the basis of two criteria: 1) export criteria and 2) free usable criteria. The renminbi was not adopted for long time as an SDR basket currency, because it has not been freely traded in the financial markets, and its international use in the financial aspect has been particularly restricted. The Chinese authorities have consequently been making a formidable push for internationalization of the renminbi in recent years.

As a first step, they gradually made the renminbi exchange system more flexible beginning in 2005, and simultaneously eased regulations on capital transactions. Next, in 2010, the Bank of China and the Hong Kong Monetary Authority agreed to establish an offshore renminbi market in Hong Kong. The renminbi is freely traded in this market, and valuated at market prices. This was followed by the issuance of renminbi-denominated bonds(dim sum Bonds) in the Hong Kong market and other measures that led to a swift increase in offshore renminbi transactions. The offshore market has a special tax and regulatory regime, and is attracting huge non-resident investments. Fierce competition over renminbi–denominated settlements is now under way among international financial markets around the world. This may be exemplified by the fact that the London market is experiencing fast-paced expansion as the second-ranked market for renminbi transactions, trailing only Hong Kong.

The renminbi is to be included in the SDR basket on October 1, 2016. The IMF established new standards of weights, giving more weight to financial variables, and the renminbi’s share was put at 10.92 percent, which is on the low side in light of actual trade size. The dollar continues to have approximately the same share as previous review, but the shares occupied by the euro and the pound have declined substantially. The renminbi acquired the third-ranked position, above the yen and the pound.

Recently, there has also been much discussion about the inauguration of the Asian Infrastructure Investment Bank (AIIB) under Chinese leadership. Asia as a whole has close economic relations with China, and use of the renminbi as a trade settlement currency is widening. The inauguration of the AIIB also affords a glimpse of the Chinese intention to build a huge economic integration as exemplified by the One Belt, One Road (OBOR) Initiative. Last year, we had a international conference with CASS(Chinese Academy of Social Sciences) and an empirical research which we made on currency system in Asian countries found that exchange rates for many Asian currencies are affected more by the movements of the renminbi than by those for the euro or the yen. This is all the more reason it must not be forgotten that further internationalization of the renminbi entails a commensurate increase in responsibilities. More specifically, wider use of the renminbi in the market in the future requires a more flexible foreign exchange system, appropriate monetary policy, and solid financial system.

The internationalization of a currency is not a demonstration of “power.” 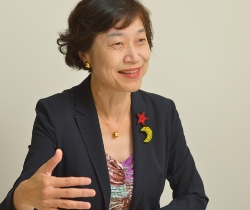 Although there had been signs of a major regime change in the world economy from the advanced economies to emerging economies, there have since surfaced various problems among the BRICs and other newly emerging economies which enjoyed rapid growth. The economies of Russia and Brazil, for example, have slipped particularly badly. Among the newly emerging economies, the deceleration of the Chinese economy exerts the biggest influence on the world economy. There are apprehensions that it will have a serious impact on the international economy as well. The plunge in the value of the renminbi in early August 2015 triggered a simultaneous drop in stock markets around the world. And here at the start of 2016, we are again seeing a depreciation of the renminbi, sagging stock prices worldwide, and appreciation of the yen accompanying a flight to quality. Based on progress in information technology, financing has become greatly globalized in recent years. This is reflected in an even higher interdependency among economies worldwide and an age where a change in the politico-economic situation in one country exerts a substantial influence internationally.

Optimal monetary policy is vital to the degree of confidence in a currency. The financial system is the infrastructure of business, and it must be solid in order to achieve stable growth. A look at the latest situation reveals that the financial systems of newly emerging economies are still saddled with numerous issues in aspects such as legal systems, accounting systems, bankruptcy legislation, and prudential policy. They may also be termed weak in regards to corporate governance. While China has promoted a fast-paced market-process transition in recent years, making a more flexible currency regime, interest rate deregulation, and easing of restrictions on external transactions, precisely because of this rapid deregulation, it is being more bombarded by the dynamic move of international capital flow. They have the rapid increase in debt on the governmental, corporate, and personal levels, which would threaten a financial instability, including the problem of shadow banking, which has helped to finance debt among local governments so far.

Developed countries have experienced and overcome various financial crises in their long histories. With the progress of globalization, they have also harmonized their financial regulations internationally. It is imperative for China and other newly emerging economies to study these rules. To internationalize a currency as well, strengthening of the financial system will be linked to fulfillment of related obligations. While China is endeavoring to obtain technology and advanced scientific expertise through collaboration with top universities around the world, it is hoped that such efforts will also be made in the financial and economic spheres as well. Many foreign students from China are currently pursuing studies at my laboratory in the Meiji University Graduate School. They are eager to learn and diligently engaged in research.

Japan, too, must be more active in its provision of information and exercise of leadership.

In fact, it may even be that China would be uniquely prepared for agile response and dynamic action for the resolute establishment of new rules if the existing ones can no longer match the realities. This nature is surely what Japan lacks most. From the period of postwar rapid growth to the 70s and 80s, Japan achieved economic growth grounded in advanced science and technology. In the process, it steadily built up a store of international trust and confidence. There were, however, not many cases in which it exercised leadership on the global stage.

In contrast, China pushed for inclusion of the renminbi in the SDR basket and launched the AIIB as if to counter the Japanese-led Asian Development Bank (ADB), whose tough lending terms and conditions have been called out of step with actual needs. This also applies to appointments to positions at international institutions. China is making its presence felt by providing people for the positions of chief economist at the World Bank and deputy managing director at the IMF. This character of being versed in negotiation skills is becoming of extreme importance in international discussions. The ability to seize the initiative in forums of multinational discussion is a critical one, considering the consequences for the national interests of an entire country. Such international discussions are carried on in English, today’s main international official language.

For this reason, the internationalization of universities and global human resource development in which I am currently involved is likewise extremely important factors in the long-term outlook for Japan. Students in Japan need to obtain the ability of the straightforward expression of your own views in English, and should be trained to make analysis of the status quo and identification and resolution of issues. It will be crucial for Japan as a whole for its people to acquire and hone such capabilities from a young age. As business becomes more globalized, it will also be important for us to understand different cultures.

Now that it ranks second as an economic power in the world economy, China will have to strengthen its financial system if they would like to promote internationalization of the renminbi. Because it relaxed regulations on capital, China is now struggling with a capital efflux. A neglect to fulfill its obligations in the monetary and financial aspects will pose a tremendous risk to the whole world. For its part, Japan will presumably find it increasingly important to pursue discussions for world stability at the G7, G20, and other forums presiding over international governance, while closely monitoring trends in China, our biggest trading partner, and other countries.