Are you familiar with the phenomenon of noctilucent clouds? It refers to a type of cloud formation that exists at an altitude of approximately 85 km in the upper atmosphere. Noctilucent clouds are generally visible at high latitudes near the Arctic and the Antarctic. Thus, they are not generally well known. In recent years, however, noctilucent clouds have been photographed in Japan’s northernmost prefecture of Hokkaido. A thorough analysis of the reason suggests that this phenomenon in the prefecture is related to global environmental change. 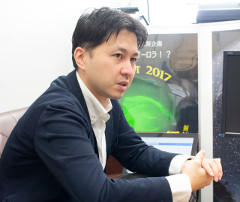 Our laboratory conducts atmospheric physics research. It may sound unfamiliar to many, but this research benefits our lives. For example, it is applied to improve the accuracy of weather forecasts.

Weather forecasting today involves creating a computer-based model of the Earth based on various data, inputting atmospheric observation data, and calculating how the weather will develop over time using this model.

Such observation data from the lower atmosphere is useful for making weather forecasts for tomorrow and the day after tomorrow. Observation data from high atmosphere, on the other hand, is useful for elucidating the mechanisms of global environmental change.
Let me give you an example to illustrate this point. Ozone holes over the Arctic and the Antarctic have been a problem for some time now. The current mainstream theory is that they are caused by chlorofluorocarbons (CFCs) among other anthropogenic ozone-depleting substances.

If that is the case, why is ozone depletion happening over the uninhabited polar regions?

Scientists know that CFC gas destroys the ozone layer gradually rather than suddenly after it is released into the air.

Scientists also know the existence of a major global atmospheric circulation in the upper reaches of the Earth’s atmosphere.

This means that ozone-depleting substances emitted from different sources around the globe go into this circulation, gather around the North and South Poles, and slowly destroy the ozone layer there.

In other words, by observing the upper atmosphere, scientists have learned that data from the polar regions largely represents that of the entire globe.

Our laboratory focuses on high atmosphere and the upper atmosphere. We have learned that the noctilucent cloud phenomenon, which was observed only in the polar regions, has recently been seen in the middle latitudes, including Hokkaido.

We are trying to find out the reason for this by focusing both on the mechanism of how noctilucent clouds are formed and on how the phenomenon is related to global environmental change.

Noctilucent clouds are formed when the upper atmosphere cools

Generally speaking, the clouds we usually see are a mass of water droplets condensed from vapor in the air. Such clouds are formed at altitudes of up to15-20 km.

Meanwhile, the aurora phenomenon occurs at an altitude of approximately 85 km or above in the upper atmosphere. The environment at this altitude is more like that of outer space as the atmospheric density is a million times lower. Even this extremely thin air contains water vapor.

When this upper air is cooled to an extremely low temperature, the water vapor in it freezes and becomes ice particles to form a noctilucent cloud. In short, it is a cloud of ice particles.

Ordinary clouds become invisible after the sun goes down. This is because clouds at altitudes of up to 20 km cease to receive sunlight as in the case of the surface of the Earth where we live.

Noctilucent clouds at an altitude of 85 km continue to be exposed to the sun even after the Earth’s surface ceases to do so, thus making them gleam in the night sky. This is why they have been named “noctilucent [shining at night] clouds.”

Things changed in 2015, when a noctilucent cloud was captured by cameras in Hokkaido for the first time. Recent years have seen reports of the noctilucent cloud phenomenon in European cities, the Central United States, and the Middle East as well.

Scientists suggest the impact of global warming. NASA has already launched a satellite dedicated to observing noctilucent clouds in an effort to beef up its observation capacity.

In all likelihood, global warming is caused by emissions of anthropogenic greenhouse gases (GHGs) such as CO2, methane, and water vapor, as concluded by the IPCC (Intergovernmental Panel on Climate Change).

The mechanism of global warming is shown below. The Earth’s surface warms by absorbing the sun light.

Yet GHGs absorb infrared radiation from the Earth’s surface while letting sunlight pass through.

Meanwhile, the energy of infrared radiation emitted from the Earth’s surface rarely reaches high atmosphere. Moreover, increased GHGs continue to emit the energy of the field into outer space. These two factors cool the upper atmosphere.

The rise in the near surface mean temperature may be caused by other factors than GHGs, which should include local anthropogenic factors.

Yet such local anthropogenic factors do not significantly affect the upper atmosphere, which thus directly reflects progress in the warming of the globe as a whole.

For this reason, the observation of the upper atmosphere is highly significant; an expansion in the regions where noctilucent clouds are observed provides indirect evidence of global environmental change. 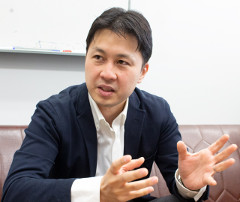 Then, why are noctilucent clouds now seen in the middle latitudes?

The first plausible factor that comes to mind is that the sky above Hokkaido, for instance, is as cold as that above the polar regions.

This suggests that noctilucent clouds may not be formed over Hokkaido.

Our hypothesis at the moment is that noctilucent clouds that are formed near the North Pole were brought to Hokkaido by a southward wind along with a cold air mass.

As a matter of fact, scientists know that very regular winds blow in the upper atmosphere with a half-day cycle and a one-day cycle driven by cyclical solar heating.

Scientists assume that noctilucent clouds are formed over the Arctic that will not evaporate even if they are carried to the middle latitudes.

In Hokkaido, noctilucent clouds are most likely to be observed around 2:00 a.m. or 9:00 p.m. around the summer solstice in June. Yet the probability of fine weather is approximately 10% around this day in Hokkaido, and few people are awake this early in the morning.

It is therefore possible that although noctilucent clouds came in the past as well, no one noticed it. It is also possible that they were invisible owing to low-altitude clouds.

With these possibilities in mind, we are planning to fly an observation balloon equipped with a camera to capture images of noctilucent cloud from above lower clouds.

Later this year, we plan to launch a separate observation project in cooperation with an air carrier on a full scale. In this project, some airplanes flying to and from Japan are equipped with an onboard camera to capture the skies.

Better understanding of the mechanism of how noctilucent clouds are formed as well as their properties and movements will allow us to better understand the environmental change of the entire globe.

When a noctilucent cloud was first photographed in Hokkaido, the media described it as a “mysterious glow” or “dreamy glow.”

Indeed, noctilucent clouds are very beautiful. But the fact that they are observed in the middle latitudes may not be an auspicious sign after all.

It is important not to overlook such signs. We encourage you to take an interest in natural phenomena around you. In fact, beautiful noctilucent clouds are worth seeing.

If you succeed in photographing a noctilucent cloud, please contact our laboratory (the Earth and Planetary Atmosphere Science Group, School of Science and Technology Department of Physics, Meiji University). We are looking forward to hearing from you.

In fact, we have developed an app that allows you to record the time, place and direction of the image as well as the elevation angle of the cloud. We are also looking at the routes of airplanes flying to and from Japan to identify flights from which noctilucent clouds are most likely to be seen.

We will communicate such information from our laboratory as well.