What are the Sticky Notes of genes that are useful in regenerative medicine and anti-aging!?

Have you ever heard of the term "epigenetics"? It refers to the mechanism involved in gene expression. This research field has recently begun to attract attention as it is also concerned with iPS cells and regenerative medicine. Basic research in this field is also ongoing at this university.

A gene is a blueprint of a protein produced by a cell. 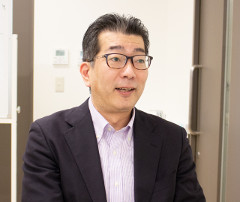 Epigenetics may be an unfamiliar to many, but it is one of the mechanisms by which genes are expressed, and my laboratory is conducting basic research on it.

What is a gene? In general, it often refers to a factor of a genetic trait transmitted from a parent to a child, but originally it means a design drawing of a protein written in DNA contained in the nucleus of a cell.

Functions of protein are the most important in living organisms, including humans. Protein is produced by cells.

A human body is composed of 35 to 37 trillion cells, and these cells are divided into about 200 types. The difference is that each type of cells produces different proteins.

For example, beta-cells in the pancreas produce protein that becomes insulin, which is important for carbohydrate metabolism. One of the most abundant proteins in the human body, collagen, is produced by epidermal cells. However, epidermal cells do not produce insulin.

In other words, genes are tagged with something like a sticky note to indicate on or off to notify each cell which gene to use or not to use. Depending on how genes are tagged, cells are classified into 200 types.

In humans, it is considered that several thousand kinds of genes are used in each cell. Some genes are commonly used in several types of cell, while there are also genes used only in one particular type of cell.

This mechanism of gene expression by sticky notes on every gene is called epigenetics.

There is a sticky note that controls gene expression

The DNA in which genes are written is very important for a living organism. If there is an alteration of information in DNA, a living organism could be mutated into a different form. That is the reason why they are kept in a safety box called cell nucleus.

When a cell produces protein, it does not directly use the precious DNA kept in the nucleus. In the case of humans, genes labeled with an “on” tag among the 20,000 in DNA are transcribed into RNA, which is like DNA but slightly different (this transcription refers to expression of the gene). Then the sequence of amino acids is determined from the information on the arrangement of bases in the transcribed RNA to produce various kinds of proteins.

Following this theory, you can change the expression of the genes if you can replace the tags instead of re-arranging or modifying genes in the DNA, which is kept in a safety box.

Of course, this sticky note is also important because it is copied during the course of cell division and contains the same sticky-note information in the same type of cells.

However, it has been found that the growth of human body and external factors such as stress can induce re-assignment of sticky notes.

That means, even though it is known that sticky notes are not absolute things, the mechanism by which they are reattached is still unknown.

However, in theory, it can be replaced artificially. So, what are we able to do?

There is a common misunderstanding about cancer cells that they are normal cells with mutated genes. However, the vast majority of cancer cells are produced owing to abnormal control of gene expression.

A mutation means that the information of a gene itself is broken or altered. But most cancer cells are originated from normal cells that cannot work properly because certain genes in these cells are tagged in wrong ways.

It is well known that cancer cells proliferate rapidly. In fact, cell division is controlled by sticky notes attached to genes. Cancer cells grow out of control owing to faulty sticky notes.

In fact, clinical trials of cancer treatments using such epigenetics are in progress. It is because we already know the enzymes that attach (remove) sticky notes.

The problem is that, with current technology, sticky notes on unspecified genes in normal cells surrounding cancer cells are also affected. In other words, adverse effects will occur.

However, in the case of a serious disease such as cancer, it is highly likely that a clinical trial medicine will come into practical use as a cancer control agent in case such adverse effects can be kept within an acceptable range.

In recent years, iPS cells, regenerative medicine, and genetic modification technology have been attracting attention, and I think epigenetics will have an impact on these technologies.

For example, in an experiment in which ordinary cells are converted into pluripotent stem cells (iPS cell) that can grow into specific cells, a technique to implant genes that are desired to be expressed is used.

But the original ordinary cell also has its own genes. These genes are tagged with sticky notes that inhibit expression of pluripotency-related genes. But you can change the cell by changing the sticky notes.

In regenerative medicine using iPS cells, for example, when treating a damaged nerve, cells such as the skin of the person are collected. They are firstly converted into iPS cells that are capable of differentiating into various cells, then the iPS cells are converted into nerve cells.

However, if we can attach a desired sticky note to the genes of the targeted cell, it will be possible to convert the skin cells directly into nerve cells without going through the process of making iPS cells.

The same is true of genetic modification technology.

The genes in an organism hold the greatest potential of the organism, but they are not fully exercised.

So, even if other external genes are not introduced into a cell, you could activate one of the existing genes which is not used much and inhibit a certain other gene which is restricting it and then make crops stronger against pests or produce a lot of fruit without genetic modification.

What is more, we can apply epigenetics to more familiar problems.

For example, it has been found that, along with changes in the human body over time such as growing and aging, the way of attaching sticky notes that determine whether to use genes changes or becomes ambiguous. If this can be controlled artificially, it may be utilized in health and anti-aging care for the elderly.

It has also been found that the onset of lifestyle-related diseases is more likely when sticky notes that have been gradually changed to a certain extent exceeding the threshold level (Ikichi).

The cause such epigenetic changes is still unknown, but it has been revealed that if you continue to sprinkle ethanol on cultured cells, the sticky notes will change. In other words, there is a possibility that the position of the sticky note changes by placing stress on the cells.

If we can understand the mechanism of stress and people’s lifestyle, we will be able to identify the lifestyle habits that need to be improved by studying the changes in sticky notes, which will lead to the prevention of diseases.

Thus, epigenetics is involved in all human life, aging, diseases and death. Therefore, research to attach the desired sticky notes to targeted genes is being conducted throughout the world.

Such research is also being carried out actively in Japan. The growing interest of the public will also encourage such studies. I would be grateful if you could continue showing interest in reports on epigenetics in future.