You can easily imagine the image of your ideal face

The cabinet decided the 5th Science and Technology Basic Plan in 2016, and Japan has started to promote the realization of a Super-Smart Society (Society 5.0). One of the issues in this program aims to provide fine-tuned services to the variety of needs that people have. The research for achieving this goal is now being developed under a business-academia collaboration that also involves our university. 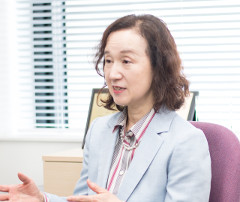 Due to the popularization of3D printers, it has become easier to create physical objects that were traditionally difficult for individuals to create.. This means it is now possible to fabricate items that are exactly suited to an individual’s needs, and such technologies are now promoted by the government’s 5th Science and Technology Basic Plan. If such technologies are further developed, we will witness a time when people own their original goods that they themselves designed, rather than owning products that were mass-produced by manufacturers, as is what occurs today. However, the issue here is how the general public can design things to match their own tastes. Manufacturers have professional designers and engineers to design their products. It should be very difficult for the average person to carry out such professional tasks. On the other hand, people who cannot design things from scratch may be able to judge whether a sample, when provided, suits their tastes and feelings or not. A technology called “interactive evolutionary computation” will aid the average person in creating designs that suit his or her taste by repeatedly making this judgment. I am now engaged in the research and development of a system that applies this technology under a business-academia collaboration.

One such activity is a collaboration with a cosmetics manufacturer. Since there are a wide variety of cosmetics that differ according to how well they suit each specific skin type, skin color and facial feature, while also being strongly influenced by people’s taste, it is not easy to find a product that is most suitable for each person. From this point of view, the “Face image beautifying system” was developed to obtain (or design) each person’s ideal facial image and suggest the cosmetics which are required to realize the face to the customers.

In the first step of the process, the facial image is captured on a PC, and from that facial image, the details of each wrinkle, spot and pore are extracted. As a matter of fact, the extraction of these components was extremely difficult, but the precision of recognizing the shapes was improved using spatial frequency. Next, the elimination factor of each of these three components is quantized into 16 levels. Additionally, the variation in skin tint (yellow tint to red tint) and brightness is quantized into 32 levels each. By combining them, you can create 4,194,304 facial images from one original facial image for each person. From these images, 10 facial images are randomly selected by computer and displayed on the monitor as the initial samples. The examinee is requested to select three favorable facial images on the basis of his/her subjective criterion. Then, from these three, similar types of facial images and completely different facial images are generated to provide another 10 samples and are then displayed once again. The examinee will select another three they prefer from those. By repeating this process several times, the facial images considered to be ideal for that person can be obtained. Through such experimentation, ideal facial images could be obtained within approximately five to six iterations, depending on the person, and this took only about a few minutes. In a matter of a few minutes, the ideal image of the face, which could not be explained by the person herself/himself, could be presented to the staff at the cosmetics manufacturer as a digital facial image.

This system is based on the mechanism that selected individuals leave descendants similar to themselves in the next generation, which is realized as the combination of the genetic algorithm and the selection by human; the genetic algorithm is one of the method of machine learnings, which is based on the mathematical expression of the evolution of creatures. The reason why completely different samples are also provided at each iteration is to simulate the process of mutation, which avoids the case to take too long a time to get the ideal face image by biased initial random samples. When two types that are similar to the selected ones so far and one type generated by mutation are selected, it becomes possible for both similar samples and completely different samples to be appeared in the next generation based on these three selections. The best possible cosmetics to match your face can be found through the process of the diversification.

Expected expansion of use and improvements in precision 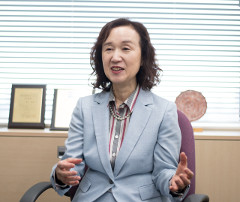 Cosmetics makers are planning to install the “Face image beautifying system” into PCs at stores where products are sold and to use this system to aid sales persons in recommending cosmetics that realize the customer’s ideal face obtained by the system. While Japanese cosmetics are highly popular with inbound customers visiting Japan, it is said that accurately identifying their desires and selling them cosmetics that match these desires is very difficult. Therefore, this “Face beautifying system” can work well as a “borderless communication tool.” As we would like to highlight the beauty of the plethora of skin tones found worldwide, we have developed a system that, starting from a fair base, can be adjusted to suit a wide-variety of skin tones from fair to dark.

Furthermore, when the system is used for a wider range of people, the history can be accumulated as data. For example, after the “Face beautifying system” has been used by one million people, it will result in one million sets of data being stored. So, the initial 10 samples selected from 4 million facial images do not have to be selected randomly, but through the analysis of these million sets of data. Some more elaborate selections of samples will become available, which will improve the precision in generating the ideal face image in the interactive evolutionary computation. Also, from the experiments conducted so far, it has been known that there are some variations in the tendency of the ideal face, depending on the ages of the persons. Therefore, if the input of age and other factors is obtained, the precision of the ideal face image could be improved. The use of such big data, not only for the “Face beautifying system,” will make the system more effective to help people to realize their original design.

In the future, I believe it will be possible to produce the most suitable cosmetic on the spot, rather than recommending one from existing cosmetics, once digital fabrication technology has further evolved. As I mentioned in the beginning, what we aim for is to attain fabrication to cope with individual needs, to provide fine-tuned services and to enhance people’s quality of life. For such fabrication, it is necessary to fully digitize the information of things. While the “Face beautifying system” is a system for such purposes, we also need digital fabrication technology to create things from such digital data, e.g. 3D printers and laser beam machines. Although, at present, producing customized products one at a time is more expensive than providing bulk production products, the evolution of digital manufacturing technology in the future should enable extremely low cost and good quality.

Moreover, the development of such technology will not only enhance the satisfaction of each of us but also lead to the preservation of global resources. Since the industrial revolution, a social framework has existed where companies produce massive amounts of goods for millions of people and sell these goods to them. This has lowered production costs, delivering goods to a wider range of people because of these low costs. On the other hand, mass production resulted in the overproduction of goods, with goods that are not liked by consumers and going unsold. In other words, bulk production created mass disposal. This is not only a waste of global resources, but it also created environmental pollution. For example, while fast fashion (low price, trendy clothing) creates a series of mass production within a short cycle, it also creates unsold goods and clothing that is thrown away by its users after losing interest, with the dyes from this giant pile of clothing leaking into the environment to pollute the earth. The second worst cause of global pollution is said to be the disposal of clothing. If only the necessary amount of goods is individually produced, it should lead the way toward the solution of such problems. Actually, I created an original bottle using the design system I had developed, and I gradually developed an emotional attachment to it, and I have taken special care of it for a long time. I will not dispose of this kind of thing easily. This feeling, I believe, is quite common to everyone. If the time comes when people can create their original things in various kinds of products, global resources, I am sure, will be better and naturally protected.

* The information contained herein is current as of Jun 2018.
* The contents of articles on Meiji.net are based on the personal ideas and opinions of the author and do not indicate the official opinion of Meiji University.