Humanoid robots can save mankind!!

Recently, the development of humanoid robots, so-called humanoids, has been gaining attention. A biped robot was once much talked about. But since it did not need to be look human from a functional aspect, its practicality tended to be questioned. However, the benefits and functionalities of humanoid robots have been reevaluated.

Legged robots expected to be applicable in times of disaster 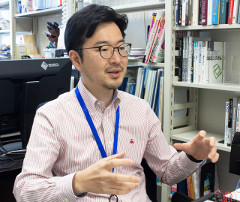 In recent years, probably the image most associated with a robot has been the robot running on a crawler belt (similar to a travelling device with caterpillar treads). This type of robot received wide media coverage at the Fukushima Daiichi nuclear power plant accident after the 2011 Great East Japan Earthquake as a robot capable of doing tasks that could not be done by humans.

On the other hand, as for the biped robot which was once in the spotlight, there was a major gap between the desired functions and the actual level of technology, and therefore, its practicality tended to be questioned.

The trend changed after the 2011 Great East Japan Earthquake when performance of the crawler robots was covered by the media.

First, the usability of disaster response robots was convincingly recognized through the nuclear power plant accident.

In fact, robots perform well under extreme circumstances, such as high radiation environments and narrow or complex environments where it is difficult for people to maneuver, environments immediately after a disaster or subject to various secondary disasters, or environments made dangerous due to high winds, heavy precipitation and high altitudes. Robots are extremely effective in speeding up and increasing the efficiency of work in such environments.

Natural disasters that are described as “once in a century” have occurred frequently, especially, in recent times in Japan. This means that increasing attention and expectations have been placed on disaster response robots.

However, the current crawler robots have problems meeting expectations.

For example, although a crawler robot is designed to climb stairs and is able to climb relatively smoothly, descending stairs is a different story. If the crawler belts do not align properly with the stairs the robot may suddenly tumble down the staircase.

Furthermore, if the stairs are spiral, climbing becomes even more difficult.

A crawler robot is also designed to move over rubble, but it can get stuck when there is more rubble than predicted. When there are large holes in a robot’s path, it must negotiate around the hole. If it cannot do so smoothly, it can become stranded and unable to move forward.

And if there are obstacles along its path, such as pipes, the robot must navigate around these obstacles so that it will not tread on or crush them.

Understandably, humans can easily negotiate these things: Climbing up and down spiral stairs, and stepping over or jumping across a hole or an obstacle. In other words, humans can respond to diverse situations because their athletic ability is superior to that of crawler robots.

Then, what should be done to equip robots with a level of athletic ability equivalent to that of humans? I think one answer is the legged robot.

If a robot has human-like legs and is able to raise its thighs high, bend knees deeply, jump, and move in a dynamic fashion, it will become possible to respond to unexpected situations more easily.

After the 2011 Great East Japan Earthquake, the United States became serious about the development of disaster response robots, and a research and development institution of the U.S. Department of Defense launched a robotics competition.

The purpose of the competition was to develop robots able to perform tasks that were chosen based on the Fukushima Daiichi nuclear power plant accident. Although the competition did not specify the form of the robots to be developed, the most common robots developed were biped humanoid robots.

I think this indicates that a biped humanoid robot is one of the solutions most suitable to the tasks that will be expected to be performed in a residential environment following a disaster.

One reason that legged and humanoid robots have regained attention is the advancement in respective robot element technologies.

One instance is improvements in sensor technology, comparable to the five human senses (eyesight, smell, hearing, taste and touch). Another instance is the performance improvement of actuators, which has been achieved by improving power density.

A substantial increase in computer processing speed has resulted in drastic improvements in controller performance. Breakthroughs in AI, achieved by deep learning, have also become prominent.

As a result, conventional sensors or conventional methods of sensor information processing enabled us to identify rubble on a road but did not enable us to determine if a road was slippery.

However, recent technology has enabled us to evaluate the characteristics of a road, and based on the road data, AI, through repeated deep learning, has been able to identify the slipperiness of a road.

Reviewing the capability of each element, such as a sensor and driving force, a level has been reached that is equal to, or surpasses, that of human capabilities. The current challenge is to integrate these elements into a system.

System integration will allow a robot to fulfill capabilities that surpass human capabilities.

But it is quite a task. For example six to seven motors are used to operate one leg. So, a biped humanoid robot will require thirty to forty motors in total to operate.

It is very difficult to build a system that can control all motors adequately.

To develop a robot, requirement specifications must be created. It is all in the tasks. If tasks are simple, it is relatively easy to create an exclusive device.

One example is a cleaning robot which has already been put to practical use. The performance of this robot is superior in some ways to cleaning done by a human using a broom and dustpan.

On the other hand, however, robots dedicated to the single task of collecting trash and dust on a level floor, will come to a standstill in unexpected circumstances.

It may be perfect as a cleaning robot, but it is not suitable as a disaster response robot.

A biped humanoid robot requires a high degree of requirement specifications, which makes it difficult to develop. But this indicates that it presents a tremendous amount of untapped potential.

Robot technologies have already been in practical use in our surroundings 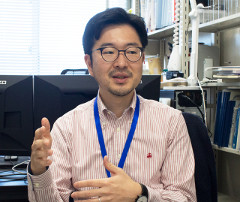 A biped humanoid robot which is likely to exceed human capabilities can be applied in various fields in addition to the area of disaster response.

For example, it can be engaged in the maintenance and inspection of antiquated infrastructure and plants. In case of a giant structure, maintenance work in high places involves risk, and there are too many places to be inspected. But robots can do these tasks for humans.

Robots can also work in a space environment. In fact, it is not desirable for humans to work outside earth’s atmosphere because radiation levels are higher in outer space.

In low-gravity environments like the moon, a crawler-type wheel robot skids due to low friction. As we saw when astronauts landed on the moon, they were jumping on the surface as they walked. Jumping increases the speed of movement.

We have also been engaged in the development of a legged robot capable of dynamic motion.

With the aim of achieving practical use, the development of the “last-mile delivery robot” has continued. The last challenge in this endeavor is literally the “last mile,” that is, reaching to the entrance of the delivery destination.

It is often the case that there are steps and bumps leading to the entrance of houses and apartment buildings. A wheeled robot cannot always accommodate these obstacles safely.

However, a legged robot can climb up and down stairs or bumps as are commonly found in ordinary residential settings.

The practical use of such a robot may appear to be a long way off, but individual robot technologies have been used in many forms in our surroundings.

For example, robot technology is incorporated into the mechanism of an automatic door. The door sensor detects the movement of a person and opens the door. If combined with a face authentication system, it would function more like a robot.

To meet shortages in manpower, the introduction of a plan to replace staff with unmanned automated operations at convenience stores has been underway. If operations like merchandise display, checkout and even bathroom cleaning become automated, it could be the robotization of entire convenience stores.

When the 2011 Great East Japan Earthquake occurred, the robots first sent to the disaster scenes were not exploration robots, but unmanned construction machines like shovel loaders and trucks. Rubble was removed by these machines to enable people and exploration robots to do their jobs.

Such unmanned construction machines were already being used after the large eruption of the Unzen-Fugendake Volcano in 1991. And they are also in service in extremely demanding operations on a daily basis.

These seemingly unlikely robots have been in practical use day-to-day around us.

And the development of seemingly robots-like robots that surpass overall human capabilities has been progressing steadily as well. When biped humanoid robots become viable, our society may change significantly.