At motor shows in recent years, various automotive manufacturers have unveiled self-driving concept cars, which have attracted considerable attention. At present, Japanese technology is said to lead the world; however, in order to turn these concepts into actual products, emphasis is increasingly being put not only on technological developments, but also on the corresponding body of legislation. 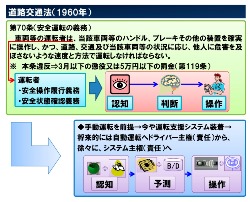 When we hear the term “self-driving cars”, we generally tend to imagine those which drive by themselves after a human has simply inputted the destination, but the current standard definition consists of the 5 levels of automated vehicles announced by the US Department of Transportation’s National Highway Traffic Safety Administration in 2013. At Level 0, a human operates all of the vehicle’s main control systems at all times. At Level 1, vehicles possess one or more specific automatic functions, each of which can operate independently. For example, these vehicles have functions such as automatic braking or cruise control. Vehicles at Level 2 possess multiple automatic functions which operate simultaneously. Vehicles at Level 3 control everything automatically. However, when a human judges that a particular situation does not permit the vehicle to remain in self-driving mode, it is possible to switch to manual mode and allow the human driver to control the vehicle. Finally, at Level 4, vehicles are totally automated. The system is in charge of all three elements required for safe driving: perception, judgment, and operation.

Automotive manufacturers around the world have been developing these technologies for self-driving over the last few decades, and have now reached the stage of carrying out experiments on public roads. However, although there are laws and systems of various kinds concerning vehicles permitted to drive on public roads, these have all been erected on the basis that “vehicles are driven by humans”. Therefore, it has become necessary to revise the law in line with these technological innovations. In 2014, a revision to the Vienna Convention, an international accord on road traffic, was adopted. This stated that even when a vehicle is in self-driving mode, as long as an instant switch to human driving is possible, the driver will be deemed to be operating the vehicle. It can be said that Level 3 of self-driving has been accepted as an international standard.

In Japan, too, Prime Minister Abe has issued a policy on the government’s interpretation stating that as long as there is a driver, this driver can be treated as being in control, even if the vehicle is in self-driving mode. From around October this year (2015), it will be possible to test vehicles not only on highways but also on ordinary roads, as long as the local police station is notified.

At the moment, tests of Level 3 self-driving cars are being carried out on public roads based on such “deemed regulations” and “interpretations”. However, in order to turn these test cars into vehicles that are available for sale, it is necessary to construct a firm legislative basis. The inclusion of lawyers in self-driving car development teams, and the addition from this year (2015) of two lawyers, including myself, to the self-driving car forum set up by the Science Council of Japan, have perhaps taken place because the real-world utilization of self-driving cars is finally in sight.

What is the liability in case of accidents in self-driving cars?

When it comes to legal issues surrounding self-driving cars, there is also the problem of legal liability in case of accidents. As far as civil liability is concerned, Japan has compulsory automobile liability insurance, and when an accident resulting in injury or death occurs while driving, support for the victims is accorded the highest priority. This system of victim support holds good for accidents leading to injury or death caused by self-driving cars, but it is limited to loss and damage caused to others, and so if the driver were to be the victim of an accident occurring due to a malfunction in the self-driving system, he or she would not be covered. At present, the majority of drivers have taken out optional insurance covering death or injury to themselves and damage to their own property, but taking into consideration the possibility of problems with self-driving systems, it can be thought desirable to formulate a suitable compulsory automobile liability insurance system.

As for criminal liability, the “Act concerning penalties for acts etc. causing death or injury to people through the driving of motor vehicles” (Motor Vehicle Driving Penalties Act) was enacted in 2013, but this applies where the driver has been negligent. If a vehicle in self-driving mode causes an accident, there is a tendency to think that the manufacturer of the vehicle or the system programmer will probably be held liable, but this is limited to cases in which the car or system has been launched as a product, even though a high degree of danger is foreseeable here. Moreover, there have been expressions of deep concern about product liability from within the automotive industry, but in order for the Product Liability Act to apply, it is necessary to prove that there was a “defect” in the car or system. 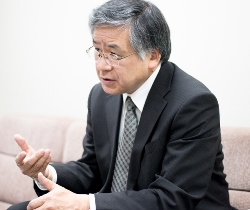 I believe that what will instead become important is to ascertain the cause of an accident and to use this information to prevent its recurrence. Self-driving cars are being developed on the premise of running safely, but it is surely difficult to uncover every unforeseen issue and malfunction in the current test vehicles. The response which is now under consideration is to make the installation of drive recorders compulsory. At present, these are used mainly as evidence to back up the driver’s claim when an accident takes place, but with self-driving cars, it is hoped that footage of accidents will help to elucidate the causes and to prevent their recurrence. In addition, in Level 3 self-driving cars, drive recorders will also help to prove whether a human or the system was driving at the time of the accident. It can be thought that submission of the drive recorder will also need to be made compulsory in accident trials.

Furthermore, a device to preserve data about the vehicle’s running conditions, similar to the flight recorder fitted in an aircraft, is also likely to become necessary. Some vehicles are currently equipped with self-diagnostic devices, but there is a need to standardize the contents recorded rather than allowing these to differ between manufacturers or models.

I believe that enshrining in law these obligations, to install a device recording images and data about the running conditions and to disclose this information, is another aspect of putting in place legislation to prepare for the era of self-driving cars.

Aiming for legislation which becomes the global standard

Countries around the world are currently competing fiercely to turn self-driving cars into actual products. Doing so requires not only technological developments but also thought about how to make the best use of these technologies in society, and so the best legislation will surely become the global standard in the era of self-driving. I believe that Japan, which has world-beating technology, is now in a strong position to move forward with legislation for the utilization of this technology.

* The information contained herein is current as of December 2015.
* The contents of articles on M’s Opinion are based on the personal ideas and opinions of the author and do not indicate the official opinion of Meiji University.