Radiation in the Air is Not Transferred to Crops! Harmful Rumors Come from Misunderstandings

Harmful rumors about the accident at the Fukushima Daiichi nuclear power plant in 2011 are said to still have a lasting impact. It was recently revealed that part of the soil base, which is needed for measures against soil pollution, was missing beneath Toyosu market, where Tsukiji Market will be transferred. Due to this revelation, harmful rumors in the future are already a concern. Why do harmful rumors get out? The reason is said to be the lack of logical thinking of the person who offers the information.

Sincerely Repeating Verification is the Attitude of Scientists 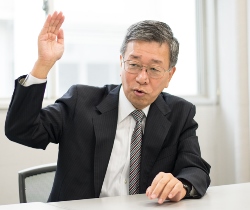 Soil physics, one of my research fields, may not be familiar to the public. Research on soil physics is applied to a wide range of fields and some of them will completely change your “common sense.” For example, one of the themes of our laboratory, the Laboratory of Land Resource Science, is that investigating greenhouse gases emitted from farmland. We often think that carbon dioxide (CO2), a greenhouse gas, is emitted by the avtivities of factories and urban life; however, methane (CH4) generated in paddy fields has about a 30 times more potent greenhouse effect than CO2 and the nitrous oxide (N2O) produced there is about 300 times more potent than CO2. When water is supplied to a paddy field, soil in the field is changed to an anaerobic condition that generates CH4; when the soil dries, the paddy field is changed to an aerobic condition that produces N2O. Therefore, we make efforts to investigate water management practices to maintain rice yields while reducing the emission of CH4 and N2O. In addition, we have started to research on CH4 transfer between the ocean and the atmosphere using a ship carrying a gas flux measuring device specifically developed for this research. In fact, some experts have said that the ocean is the sink of CO2 and the source of CH4. Note that this statement is based only on theoretical calculations and there are very few reports based on actual measurements. Our experimental verification is one of the world’s first attempts.

In soil physics research, repeat observation, investigation, and verification are the common approach to conclusive evidence. This is the basic attitude not only to soil physics but also to all scientific fields. Of course, it takes time to obtain conclusive evidence and I sometimes get frusctated with this. As a scientist, however, I cannot easily make a statement based on speculation.

Our group uses our research results for activities to assist with reconstruction from the accident at the nuclear power plant in Fukushima. In Iitate Village, where the evacuation order will be cancelled next March, we have been making efforts so that the farmers who will come back to the village can engage in agriculture free from anxiety. Radiocesium from the nuclear power plant stays about a 5 cm-thick surface layer. To perform decontamination, a 5 cm-thick layer from the ground surface is removed. The removed soil is replaced with clean sand collected from local mountains. As a matter of fact, the 5 cm surface layer of the farmland is a very fertile layer that contains much nourishment and organic matter; it is the important soil layer that the farmers have cultivated for generations. Crops do not grow in soil where the important soil layer has been removed and pit sand is spread in place of the soil. Professor Ozawa of Kurokawa Farm, Meiji University designed a cloud-based drip irrigation controlling system. This drip irrigation technology was originally used in areas with limited water resources. In his irrigation system, liquid fertilizers are included in irrigation water. This allows crops to be fully grown even on decontaminated less fertile farmlands. Of course, crops grown with this technology contain radiocesium below the detection limit. Local agricultural committee members said to me that they wanted to spread this technology throughout Iitate Village. I was engaged in verifying the distribution of water and nutrients in soil. I am very happy as a scientist that our research is used like this.

A High Air Radiation Dose does not Cause the Transfer of Radiocesium to Dried Persimmon. There are a Lot of Misunderstandings about Radiation Doses 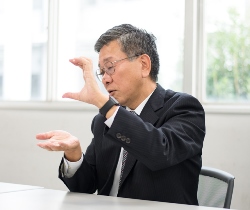 It is important for urban consumers to understand that crops harvested in rural areas in Fukushima are safe by knowing what kind of efforts are made in the areas. In these terms, the inspection of all rice (screening) and sample inspections of fruits and vegetables (monitoring), which are carried out in Fukushima, are effective. We’ve held symposiums on radioactive contamination several times after the accident at the nuclear power plant. Before the inspections were carried out, farm producers in Fukushima Prefecture came to our symposiums to claim eagerly that they’d put everything into growing these crops and so we should please eat them safely. Although the crops that were produced were safe, few people bought them due to the harmful rumors. The producers might want to change the situation; however, just making claims will not persuade or bring relief to consumers. The consumers’ anxiety only first started to be fade by beginning the inspections and presenting numerical evidence showing that the crops were safe.

In addition, a high air dose does not cause an increase in the radiation dose of crops harvested in a given area. Many people may misunderstand this point. I was previously surprised to hear a college professor saying that she did not eat Ampo persimmon, a special variety from Fukushima. Even if a persimmon is dried in a place having a high air dose, radiation will not be transferred to the persimmon as radiocesium. When the root of a crop absorbs soil water which is contaminated with radiocesium, the radiocesium accumulates in the crop. This is how the radiation dose of the crop becomes high. Even if a crop is exposed to external radiation, the radiation does not remain in the crop. The current air dose of Iitate Village is about 0.3 μSv/h; however, as mentioned above, the level of radiocesium in crops harvested using the new technology is below the detection limit.

Based on scientific findings, researchers who sincerely inspect their related fields can offer correct information on these issues. However, even comments from a scientist or an expert without any scientific basis may lead to harmful rumors. Scientists must not forget their sincere attitude and their conscience.

The media should not emphasize the sensational point of view. At first, they should fully face the facts to distinguish between what they know and what they do not know. Then, they should take the attitude of trying to understand what they do not know. Practicing such logical thinking will allow effective collaboration with sincere scientists. This will make it possible to eliminate the harmful rumors. I think Japan has grown to be a first-class nation in the 70 years after World War II; however, a country where harmful rumors easily spread is not a real first-class country. Japan has a long way to really become first-class. I think Japan can grow to become a superior and real first-class nation through collaboration and progress between science and the media.