Could Mr. Trump’s Election Model be Applied to Japanese Elections Using the Internet?

In the 2016 American presidential election, Mr. Trump’s use of twitter was the subject of a lot of attention. Mr. Trump himself stated that “social media helped me win my election.” So how was Mr. Trump able to make use of social media, and will it also be possible to utilize it in future Japanese elections? Let’s consider these questions by looking at the American presidential election.

Even though the social media was the same, there were differences in how it was used 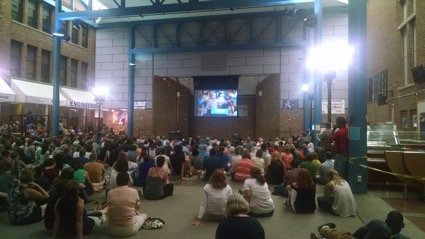 A public viewing hall for supporters who waited three hours under the blazing sun but couldn’t get into candidate Clinton’s rally. (August 1, 2016, Omaha, Nebraska)

The internet has been used in American presidential elections since midway through the 1990s. Initially, it was used simply, with candidates setting up a website to advocate their positions and opinions on. However, a big change came in the 2000 presidential election. Each campaign, created websites that could be used to recruit volunteers and solicit campaign donations. In 2008, candidate Obama was very proactive in taking advantage of the spread of broadband, with his use of YouTube videos and applications for iPhones. And in 2012, Twitter also began to be used. The nature of Twitter allows for speech to be transmitted immediately, and for the speedy rebuttal of rival campaign’s points. As soon as one side sees what the rival candidate is saying, they can fire back a refutation straight away. This can be seen by both supporters and voters, with a feeling of it being live, and they not only get to know the attitudes of the candidates, but they also get to enjoy it in a sense. This tendency became even more intense in the 2016 presidential election.

After the election, Trump said that “social media helped me win my election” in an interview with a CBS news program, but of course the Clinton campaign also had a social media strategy and used an outside group to form a rapid response team. The Clinton campaign’s strategy centered on using Twitter as an instant way to circulate campaign information as news. For example, when she gave a victory speech in the primary election, the contents of the speech were posted on Twitter in real time, and a lot of use was made of videos to present an attractive package, like broadcasting edited versions of Mrs. Clinton’s TV adverts, which had a strong connotation that they were announcements from Mrs. Clinton. However, these were controlled from above, and rather than being a conversation with voters, you could say it was more like a personal television station. In contrast, Mr. Trump used Twitter as an informal tool for communication, and a way to spread his conversations with supporters. This helped his messages, which could be characterized as reckless remarks, resonate with voters who “wanted a change in the status quo,” and provided fertile ground to wildly enthuse Trump supporters.

Did major media outlets that were supposedly anti-Trump help create him!?

From the beginning, the Trump campaign placed Twitter and social media at the core of their communication strategy, but at the primary election stage there were a number of voices who questioned whether this would have a positive effect in an election. However, I think there was a need to rely on social media. This was because most of the existing major media outlets were anti-Trump. Even FOX News, the conservative television station that usually supports the Republican Party, was anti-Trump. So the Trump campaign, which couldn’t fight the election campaign by enlisting the support of major media outlets, conveyed its message to its supporters directly through social media. Moreover, the contents were informal, so it was like communicating with your own fan club.

However, a fascinating phenomenon began to occur. Major media outlets started showing an interest in Mr. Trump’s extreme messages that were evoking sympathetic responses. At first, even though they treated Mr. Trump’s reckless remarks and inflammatory stories on websites as comical, they became highly valuable news items. Despite being unable to enlist major media outlets as an ally, and the communication on Twitter being like that of a fan club, it was conveyed to many voters by major media outlets reporting on it, which created a cycle that inflated the topic. It’s hard to imagine in Japan, but newscasters on American news programs would have computer terminals on their desk, and if there was a tweet from Mr. Trump, even if they were in the middle of other news, they would continually tell their audience about them throughout the program, saying “Mr. Trump has just said this.” Twitter would make the media report on Mr. Trump, and because the media was reporting on him, Mr. Trump would tweet more and more, leading to the occurrence of a spiraling phenomenon. In the end, it got to the extent that on a day when Mr. Trump lost one of the primary elections, the CNN newscaster didn’t comment on the winner, Mr. Cruz, but instead commented that “Mr. Trump didn’t tweet today.” It would probably be fair to say that by reporting on a sub-media like Twitter, the major media outlets helped create Mr. Trump. 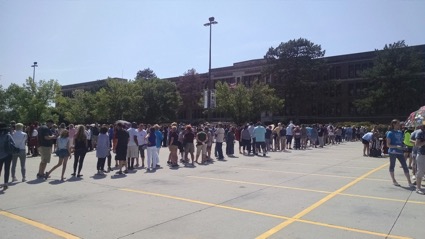 Supporters standing in line to get into a rally for candidate Clinton. Approximately 3,000 people attended. (August 1, 2016, Omaha, Nebraska)

Of course, Mr. Trump’s victory was not solely due to his use of social media. The confrontation with Mrs. Clinton was also determined by other factors that can’t be ignored, such as voters demand for an outsider over an insider, and Catholics and evangelicals preferring to support the conservative Mr. Trump over the liberal Mrs. Clinton. From the Japanese perspective, Christians support of Mr. Trump might seem strange, but this was largely influenced by the timing of having a vacant position on the Supreme Court of the United States from February 2016, and the fact that the next president would get to choose who would fill this vacancy. With the acceptance of abortion and LGBT marriage being major issues, Christians didn’t want any more liberal leaning judges to be chosen, and so didn’t pick the liberal Mrs. Clinton who zealously goes to church, but chose the conservative Mr. Trump who had stated that “I believe in God, but I’ve never sought God’s forgiveness.”

This election exposed how serious the extent of the divisions are in American society. These divisions are not simply a problem between different classes of economic groups, or the political establishment and the general public, but also extend to between people with liberal values and conservative values. It is also not only just a question of religious ethics. For example, President Obama tried to make advances in regards to gun control, and the areas where this is supported, like the East Coast and the West Coast of the US, coincided with the areas where Mrs. Clinton received the most votes in this election. In contrast, areas that are against gun control, like the Midwest, were areas that voted more for Trump.
Bringing together this divided America was going to be a massive task for whoever became the next president. There is still a lot of anti-Trump feeling, and in response to that he has begun to soften his stance on some of the more extreme policies that he advocated during the election, but this in turn has caused a backlash from Trump supporters. Those in the political world, economic world and journalists have calmed down from their momentary hysterical reaction, and have turned towards watching Mr. Trump’s actions attentively, but the feelings of the citizens have not been so easily calmed. The populist, Mr. Trump will have his abilities severely tested from here on in.

In Japan, there is an ideal use of the Internet in elections that suits Japan

This time, I questioned whether it would be possible to use social media in an election here in Japan as effectively as Mr. Trump used it his election. To start with, the candidate must be a character who resonates with the voters. It seems there needs to be certain conditions for this, like a clear issue at the center of the election, and a candidate who is an outsider that challenges others to a fight. A conference of American political consultants also pointed out that not just anyone would be able to use Mr. Trump’s strategy. Furthermore, the way major media outlets in Japan report on social media differs greatly to that in America. This point by itself means that I think it would be difficult for a dynamic movement to arise in Japan that originated from social media.
However, there was a very interesting portal site during the 2016 Upper house election, in which the voting age had been lowered to 18 years. This site set up a service that listed and summarized the election news and, within that, created specialized additional sites that provided information tailored to the perspectives of 18 year olds. In Japanese elections, where there are numerous political parties, the main points at issue are not very clear, and the period of campaigning time is also short, I think this site demonstrated a possible use of the internet as an effective means for information gathering. Because perspectives differ according to age groups, accurately collecting information that suits these perspectives from mass media, like newspapers and television, is extremely difficult. I’m focusing on this application as I think it may provide the opportunity for the formation of an ideal way of using the internet in elections that suits Japan.