The situations of inbound and outbound tourists have reversed in Japan. What should Japan do now to become a Tourism Nation?

Do not stick only to the number of inbound tourists

The announcement that the number of inbound tourists exceeded outbound tourists was impressive for me, because I worked in the tourism industry in Japan for a long time when outbound tourists had an advantage. The background includes the easing of tourist visas, the improvement of information provided in foreign languages in cities and tourist areas, support for enhancing cooperation among tourism-related industries, and promotional activities including “Visit Japan” which are mainly led by the Japan Tourism Agency and the Japan National Tourism Organization. The weak yen trend is also assumed to have contributed to the situation.

These factors brought about today’s result. Then some people immediately said that 40 million inbound tourists, which is more than twice as large, should be aimed for by 2020. I think “Hold on!” about this. As a policy, a numerical target is of course necessary. However, it is important to properly discuss what actions are required to achieve the target and what problems or dilemmas exist, in order to develop guidelines based on the discussion, and to promote actual policies. Unfortunately, the truth is that the young generation knows very little about the actual policies of the Tourism Nation though they will lead Japan in the future. Unless the essential dilemmas of tourism are understood, tourism cannot be a pillar of the nation in the long term. The number of inbound tourists largely depends on external causes. Setting the achievement of a numerical target as a goal might end up as just a boom, and the essential goal, or aiming to become a Tourism Nation, might be lost. Now, Japan is at a crossroads to become a true Tourism Nation. I would like to think about the nature of the true Tourism Nation to be aimed at again, not just being optimistic and pessimistic about numbers.

A dilemma seen from the two aspects of tourism

Today it seems that only advantages of tourism such as economic effects and regional revitalization are mentioned around us. However, tourism has a lot of bad effects. For example, tourists are not the only people who come to Japan. The increase of inbound tourists means the increase of risks of terrorism and pandemics. Last year more apparent problems such as tourists’ bad manners, min-paku (a service to provide private houses as accommodations for guests), and inventory depletion resulting from excessive shopping arose. The arrival of people in one area brings social, cultural, environmental and other effects and troubles. Tourism essentially has the good aspects of bringing economic effects and liveliness and energy to an area, and has the bad aspects of bringing cultural friction and bad effects to the living environment and society. It is necessary to understand first that tourism is an activity that has a dilemma from these two aspects.

So how should we face this dilemma? Should we one-sidedly tell tourists that they should behave according to Japanese customs and manners as they are in Japan? But then could a Tourism Nation be formed? For example, in the UK, which is an attractive country for tourists, the concept of “public” has been created historically, and a sense of sharing public space with foreign people is rooted in society. When I was studying in the country, I spent time reading in parks or square gardens for breaks. When unknown people came into the same space or place (such as the same bench), people greeted each other smilingly, and spent their own time separately while respecting each other. They said “Have a nice day!” when they left. They were not family or friends. They knew how to keep a proper distance from those who were neither strangers nor enemies. This was very comfortable and I felt they knew how to spend time in public space. In the UK, the concept of “public” is alive in a lot of spaces and tourist resources. Public space means space for everyone, and does not exclude people from other countries. For foreigners and tourists, comfort of space to share with local people must be an attractive point of the country.

Compared with the situation above, Japanese people have strong senses of private ownership and territory, and tend to be closed to strangers. This is the so-called village mentality. On the other hand, space for a person to share with someone who is not their friend is basically given by the authorities. Thus they do not have a strong sense of belonging to public space such as parks and public facilities, and this sometimes leads to a lack of concern about strangers or space to share with others. Having a village mentality of course has a lot of good aspects such as unity as a community. However, tourism cannot be successful if strangers are rejected or ignored, or if local people force strangers to follow their own “village rules.” Tourism requires the sharing of space, places and tourist resources with “strangers”, and this is established based on sharing of values and respect for each other.

However, some people may be afraid that they might be unable to keep their own identities by sharing values or respecting others too much. Here, please see France’s case. France could be called the world’s largest Tourism Nation, as the number of inbound tourists visiting the country in a year has reached 83,700,000, which is the largest number in the world. France of course has a lot of attractive tourist resources such as museums and gourmet food. However, I assume the biggest reason the country attracts tourists from other countries is because French people are very proud of their culture and identity. The strong pride leads to the power to preserve the cityscape of Paris and strongly show their culture and history. Although the history and culture that French people are proud of are so attractive, when talking with them, they are not at all closed. This is proved by France having the world’s largest number of inbound tourists. The very reason that the country is a Tourism Nation is that local people proudly live their lives. It is not a Tourism Nation that accepts tourists just one-sidedly. 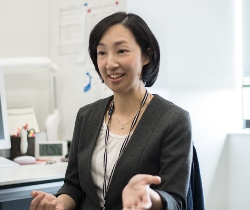 The UK and France are examples of Tourism Nations. Although there is a lot to learn from these two countries, Japan will never succeed only by copying them. Japan requires its own unique actions rooted in Japanese history, culture and society. A variety of strategies are actually being promoted. One of them is Japanese-style Destination Management Organizations (DMO). A DMO is an independent organization based on an extensive tourist area beyond administrative districts such as municipalities. It works as a unified platform for tourism of the area, including marketing and promotion. Presently organizations of various styles, such as ones involving the cooperation of companies or ones in which the public and private sectors work together are established in various areas. Those who engage in the tourist industry are diverse. Some of them do not directly engage in the tourism industry, but are deeply related to it, such as the transportation industry or the manufacturing industry. A DMO sends out information about the tourist area in which relevant people work together by unified marketing. Through this, it is expected to strive to form an extensive tourist area and lead to establishing a brand of the area.

It is very meaningful when a region creates a brand as a place (place brand) and forms competitive identity. To do so, people living there need to take pride (civic pride) in the area they live in, and live happy lives. This results in attracting people from outside. France’s case shows this point. Formerly, Prime Minister Koizumi set the slogan “Nation-building that provides a good living habitat and a good place to visit” when the Japan Tourism Advisory Council was held. This is very appropriate. Potential Tourism Nations should not only set a target number of inbound tourists, but also be “a good living habitat” in the first place.

As a result of the rapid increase of inbound tourists, a large number of unspecified visitors have entered our living space without knowing our rules (both tacit and stated). In the present situation of expanding globalization, regional space and tourist resources, which had been shared among a limited number of people, are now open to more people from diverse backgrounds. In order for people living in a certain area to live their lives happily and with pride, it is necessary to establish a new vision for tourism, one centering on people who live there and by adding the viewpoint of how space and tourist resources should be used for many unspecified visitors from outside. Now is the time for us to search for a new form of “public” and rules in Japan by involving a lot of people. Tourism is an activity that has a lot of stakeholders, and this is exactly the power to establish a new kind of “public” which provides “a good living habitat and a good place to visit.”