Biological chemistry contributes to “medical care for a better life”

The progress of medical technologies has been remarkable in recent years. Among them, biological chemistry plays a part in the great driving force of development of iPS cell transplantation, genome editing technology, and inspections and treatments for cancer. In our university, there are research teams aiming to “contribute to medical care from the perspective of biological chemistry.” 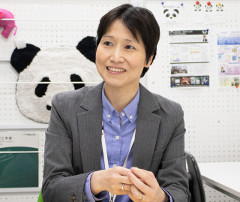 Biological chemistry is a science that discusses in depth the reasons “why such a thing happens” in various life phenomena using methods based on chemistry, and various basic researches are being conducted. In the Department of Applied Chemistry, we aim to give benefits back to society by applying things clarified in basic researches.

Among those researches, we have recently been focusing on efforts against various diseases associated with aging. Osteoporosis is one of them.

People tend to think that bones are white and hard, and that they stay unchanged after they have grown to a certain size in the body. However, in reality, metabolism is always working where bone is destroyed and regenerated.

Human bone formation proceeds until the end of the growing period, and then the rate of bone resorption and formation becomes equal after about 20 years old.

With advancing age, however, the rate of bone tissue formation decreases, and it becomes off-balance against bone resorption. As a result, bone becomes brittle, which increases the likelihood of bone fractures occurring.

Recently, various therapeutic agents which suppress osteoclasts have been developed. For example, there are approaches that inhibit the activation of osteoclasts or reduce the number of osteoclasts themselves.

On the other hand, we are making efforts to activate the bone regeneration function.

In these efforts, we are focusing on the zinc ion. The zinc ion is thought to activate the formation of bone tissue as well as suppress bone resorption.

For example, there is a therapeutic method for bone fractures in which the artificial bone is embedded to make up the living bone. We are discussing an approach whereby bone cells are acted upon by incorporation of zinc ion to those artificial bones.

Activated cells have some growth factors that also activate cells around them. Therefore, we think that if this mechanism works, the type of approach mentioned above accelerates the healing of bone fractures and suppresses bone weakening.

For the elderly, bone fractures are of course a risk. However, even more problematic is to get caught in a negative spiral in which bone weakening progresses throughout the body or dementia develops by being immobile for long periods, for example, due to fracture of a leg bone.

Probably you all know that exercise is good for muscle, but an adequate load is also very important for bone health.

Longevity is of course a great thing, but the important thing is a healthy life expectancy. Being able to move freely and stay healthy is related to quality of life.

In this sense, we think that measures against osteoporosis are important.

Measures against periodontal disease, which tends to be overlooked, are also important in terms of healthy life expectancy.

This is because if it becomes difficult to eat food, enjoyment of life is also impaired, let alone nutrient intake.

Periodontal disease is more problematic than tooth decay because it is more difficult to treat.

Naturally, there are a lot of germs in a human mouth. There are both good bacteria and bad bacteria living together.

Ideally, they will be balanced with each other. However, if there is inadequate brushing and bad bacteria are activated, “dental caries” causes holes to occur in the teeth. This is tooth decay.

Furthermore, if a bacterial infection occurs and bacteria accumulate between the teeth and gums, the gum rim becomes inflamed and periodontal disease occurs. If it progresses, the gum recedes and teeth become exposed.

If tooth decay progresses, sometimes treatments such as tooth extraction and denture use will be carried out. If periodontal disease progresses, however, the part of the jawbone holding the teeth dissolves and it becomes impossible for dentures to be introduced since there is no base to put them on.

Therefore, treatment has to start from curing the dissolved part of the jawbone, which makes the treatment difficult.

Of course, periodontal disease can occur in young people. However, since it is caused by the accumulation of bacteria due to inadequate oral care or a decline in the self-cleaning function, morbidity of the elderly is on the increase.

In light of this, we are applying the study of bone regeneration, which is a measure against osteoporosis, to this issue and conducting studies of the mechanism of bacterial adhesion to teeth and methods to suppress bacterial growth.

It is biological chemistry that reveals this mechanism. Based on the research results, we are aiming to develop toothpastes and therapeutic agents with an effective antimicrobial effect. 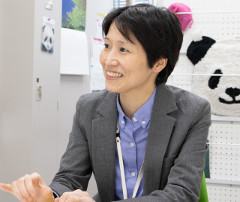 Thanks to the improvement of inspection techniques and development of various treatment methods, cancer is becoming a disease that can be detected in the early stages and cured completely. However, it is still a serious disease for the elderly.

Cancer starts when DNA is damaged for some reason and fails to replicate itself properly, generating mutated cells. This is called initiation. Actually, such mutations are happening frequently in our bodies.

Even so, they do not necessarily develop into cancer because human bodies have mechanisms to remove mutated cells, the so-called immune functions.

For example, there is a phenomenon called apoptosis which leads mutated cells to spontaneously disappear as if committing suicide.

However, some mutated cells inhibit those immune functions and escape from them.

Those cells then promote the replication of mutated cells. This is called promotion. If it proceeds, normal cell functions are inhibited, and cancer progresses.

The longer the human lifespan becomes, the higher those risks become.

Since this June, genetic tests have been covered by insurance. This is a method to examine whether there are mutations in genes based on a list of genes known to be related to cancerization.

The problem is what kind of treatment should be conducted when the test indicates the risk of cancer.

Sometime ago, an American actress found that she had a high risk of breast cancer and had a mastectomy in advance, but such treatment is not necessarily the best choice for everybody.

Development of new anticancer drugs and technologies for immunity enhancement are required. Biological chemistry has been applied to these fields.

For example, “genome editing,” which has recently been attracting attention, is one of them. This is a technology that reduces the risk of diseases such as cancer by editing particular areas of genes.

Though there are issues of ethics and safety to be solved, such approaches are in progress.

In this sense, we believe that each patient should be able to choose the treatment appropriate for him-/herself and incorporate various treatments in combination.

Biological chemistry, which we are addressing, is able to and should provide plenty of items which contribute to such medical care.

To give our research outcomes back to society, we are cooperating with doctors and staff from medical companies and conducting collaborative studies instead of locking ourselves in the laboratory on campus.

* The information contained herein is current as of August 2019.
* The contents of articles on Meiji.net are based on the personal ideas and opinions of the author and do not indicate the official opinion of Meiji University.
* I work to achieve SDGs related to the educational and research themes that I am currently engaged in.