Unraveling the cause of infertility by genome editing

The declining birth rate has become a social issue in Japan today. There are various causes, and it is said that infertility is one of them. Currently, however, the treatment options are limited. This is because the mechanism of pregnancy (in vivo fertilization) has not been fully clarified. At our university, we are conducting researches to clarify the mechanism of in vivo fertilization.

Many aspects of in vivo fertilization have not yet been clarified 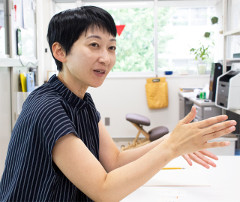 However, the mechanism of the phenomenon has not been sufficiently clarified.

In fact, there are still a lot of unknowns in the mechanisms of fertilization and embryonic development occurring in mammals’ bodies including us.

This is because in vivo fertilization is an event in which male and female factors interact complicatedly with each other and it is impossible to observe the whole process under an optical microscope. This is a phenomenon of wonder and is very difficult to analyze.

In the course of pregnancy, sperms enter a female body and meet an ovulated egg, and fuse with the egg’s plasma membrane to complete fertilization. If the fertilized egg is then implanted in the uterus, pregnancy is established.

When an egg becomes an embryo, it becomes a distinct individual, in other words, foreign cells to its mother. Even so, the embryo is implanted in the mother’s uterus and develops in the mother’s womb.

It is an unusual process in which one’s cells are connected to non-self cells. This is hard to explain with ordinary interpretations.

In fact, the uterus itself is a mysterious organ. It is well known and recognized as a normal thing that menstruation occurs because the endometrium peels off once a month.

But what if you are injured so seriously as to lose the entire skin from the back of your hand?

And what if it is healed in one month, then peels off repeatedly?

You can easily imagine that this is more serious than a scratch. Endometrium is thus thought to have a particular regeneration system, which skin does not have. However, its mechanism has not yet been clarified either.

Furthermore, the meeting of sperms with an egg, which occurs prior to fertilization and egg implantation, is also a mysterious phenomenon.

Since sperms are non-self cells to a female, when they come into a female’s body, they are supposed to be targeted by the female’s immune system.

In fact, in the case of humans, sperms can live inside a female’s body for about 3-5 days. Though it is said that there are about 300 million sperms in one ejaculation, most of them die on the way, and only about 200 of them finally reach the egg in the oviduct.

To put it another way, why can sperms stay alive in a female’s body for 3-5 days? This also has not been clarified yet and this mechanism is what we are studying in our laboratory. 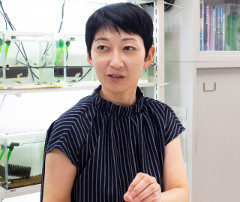 For example, suppose that we form a hypothesis that a molecule A is important for fertilization. Then we make mice which do not have A by using genome editing, and we investigate the mice. If the mice can make babies, it means that the molecule A is not important but if they cannot, it means that A is essential for their fertility.

Currently, I am focusing on the liquid components in male semen other than sperms. I think that proteins in the semen perform some kind of function in fertilization.

We made mice which lack the proteins and investigated them. As we had expected, they could not make babies.

We pursued the reason why they could not make babies and found that a large number of sperms died inside a female’s body, which we had never expected.

From this result, it was clarified that the proteins in semen, which we are focusing on, is not directly involved in fertilization, but has a role in protecting sperms inside a female’s body.

This means that there is a mechanism in which the proteins in semen protect sperms so that sperms can stay alive inside a female’s body without being eliminated by the female’s immune system. This was a new discovery.

If humans have the same mechanism as the one found in the experiment with mice, there is a possibility of new medical treatments.

In existing treatments for infertile patients, a women’s body is examined to see if it is capable of pregnancy; the condition of sperms and eggs is also examined. However, neither the proteins in semen nor the strength of the female’s immune system is examined.

If the cause of infertility is found to be a lack of the proteins in semen which protect sperms, or a female’s strong immune system which kills sperms in a short time, more precise treatments can be developed.

For example, by making those proteins artificially and introducing them into a female’s body with sperms, the sperms will be protected from the female’s immune system and reach the eggs. This may increase the probability of more natural pregnancy.

Though it is currently only an experimental result with mice, we are planning to conduct cooperative researches which will enable clinical tests in the future.

I would like those who are suffering from infertility not to be pessimistic. Rapid progress is being made in both the scientific and medical fields.

A few years ago, the genome editing mentioned above was a dreamlike technology.

Today, however, this technology is so commonplace that even junior students who have just joined our laboratory can use it.

The mission of researchers is to give our research achievements back to society. Our laboratory’s aim is to achieve results that are useful to those who are suffering from infertility.