Can origami contribute to space development and save the future of human beings!?

News of launching large space structures such as solar sails into space has been a topic of conversation for some time because Japanese Origami art was made use of in order to fold a large structure into a smaller and more compact size that could be accommodated in the launch vehicle. In recent days origami art has been applied in a variety of areas and has drawn attention not only as an art but also as Origami Engineering. At our university, we have an advanced research team for Origami Engineering.

Origami : Utilized in areas from space development to beverage cans 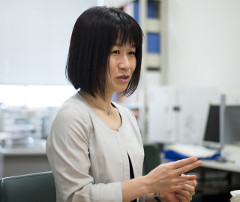 I have specialized in Origami Engineering, which applies the science of origami to engineering. However, there is no textbook for Origami Engineering, nor has an academic system defining it been established. Origami is, from my perspective, a structural design that can be used to create three-dimensional shapes out of two-dimensional ones. It will evolves into academic studies, which will have various applications, by finding functionalities contained in the origami. I am studying applications of origami to robots and machinery from the viewpoint of mechanical engineering. Some specialists in mathematics and architectonics view origami by trying to apply it in geometry and new architectural structures. That is to say, the concept of origami has a variety of possibilities and potential.

Engineering studies on origami were carried out in the field of space engineering in the 1970s. They focused on how it was possible to fold large space structures such as solar panels compactly in order to accommodate the structures in the launch vehicle and how it was possible to deploy the structures in space. In daily life, you may find a beverage can that has a diamond pattern imprinted on its surface. This pattern is derived from the patterns that appear on the surface of a thin-wall cylinder when it is collapsed under longitudinal pressure. This pattern can also be expressed with origami and it is known that this pattern makes the thin-wall cylinder light and rigid, resulting in higher strength against lateral force. A cylinder having these patterns on its surface is less likely to be dented even if the wall is thin.

Various countries worldwide have their own art and/or culture to express things around them by folding paper. Among these countries, the Japanese art of origami is not limited to be culture, art, or a hobby but has also highly evolved in academics that can create technologies and offer something useful for us by making use of its features to change shape. Around 2000, the term Origami Engineering was coined and approved worldwide.

When you hear the word origami, you might imagine that paper is the only material used. But I do not stick to sheets of paper when folding origami. It is important that the origami is used as a measure to create something useful for us and to create technologies. I will choose material(s) other than paper when such material(s) meets the purpose and I will sometimes cut and/or paste the material(s). However, it should be noted that, in the natural world, there are a lot of things that can be expressed with a sheet of paper. For example, a morning glory bud is folded and twisted to form a small and compact shape, and the bud flowers widen into a cone shape in the morning. It is conceivable that the shape of things in nature have been optimized over the course of evolution into better shapes, culminating in a highly sophisticated shape. This implies that the folding pattern of morning glory flowers seems to have some messages. It is important to ponder the messages. Is the folding pattern of the morning glory related to the growth of the flower or is it a matter of efficiency of the energy to make the petal open? Discovery of the answer to such questions (i.e. messages of the folding pattern) could widen the application of the functionality originated from the shapes in nature to engineering. This is the reason why it is important to ponder the messages of the folding pattern. A sheet of paper refers to the simplest shape of the material. If function(s) can be obtained with the parts minimally required without using complex combination(s) of materials and parts, then the resultant shape can be light in weight, not redundant, and should be easy to make. All of these are significant engineering merits. The honeycomb is another existing example of application of natural form to engineering. Thin metal films are folded and pasted to create a hexagonal cell structure like honeycomb, and this hexagonal structure is called honeycomb core. Due to its light but sturdy structure that can withstand large load, it has been used as material for construction work, aircraft manufacturing, etc. In our Laboratory for Mechanical Function Design, we have designed and manufactured a spherical honeycomb core to which the conventional technology to manufacture the flat plate honeycomb core is applied, and we presented it at the 8th World Water Forum in Brazil in March 2018.

This World Water Forum is an international conference, in which exhibitions and discussions are held to find solutions to resolve the worldwide water crisis. For example, people living in areas lacking water supply infrastructure have to travel a long way to fetch the water for their daily life on their shoulders every day. An incorporated NPO (non-profit organization), which is supporting these people, has asked me to see if I can manufacture a water container to allow them to bring water with ease by rolling the container on the ground. The container has to be light by itself and, in addition, it has to be folded and portable when it is not filled with water. Given these requirements, I came up with the use of a honeycomb structure. The honeycomb core cannot withstand load in any direction but it can sustain large load in only one direction along the walls of the hexagonal honeycomb cell. As a matter of fact, it cannot hold against the load normal to the wall. The cylindrical honeycomb core, whose core walls are radially arranged, can sustain the radial load (weight of water in the container) while the container is rolling, but it is difficult to change the direction of a rolling cylinder. The sphere is the ideal form to make the container roll and change its rolling direction with ease. In the first step for making the container, we made a framework of the easily collapsible spherical honeycomb core, whose walls are radially arranged, with polypropylene that is light but has a certain strength. Our booth in the World Water Forum, in which this framework was exhibited, drew global water crisis activists as well as researchers and government officials, and they seem to be interested.

Idea to convert imaginability to creativity: Capability unique to humans 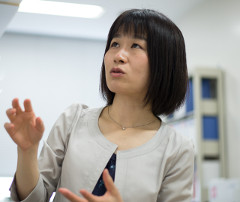 The development of the spherical honeycomb core requires the mechanical perspective of nature similar to the development of the vibration isolator as described above. You may think that the computer numerical calculation would be good enough to design the spherical honeycomb core because its form can be decided geometrically. However, the geometrical calculation can provide only the form; it cannot provide the strength to withstand the load. The first step of our development of the prototype water container was the selection of material that could be used to form a water container of 40 cm in diameter and we had to select a material suitable for this size. In the subsequent steps, we decided the number of required cores, thickness of the material, etc. Small misalignments between a few cells gradually accumulated to become large misalignments between cells in the course of assembling the container. The spherical form of the container was deformed due to friction among cores and the container’s own weight. We encountered such incidents as above, which could not be revealed by the numerical calculation and can be known only by making the hardware. An effort to find solutions to remove cause(s) of such incidents is the driving factor in creating new ideas. We are apt to regard imagination as creativity but it is very important not to confine an idea to dream (imagination). It is also very important to put the idea into physical substance by moving our hands. Especially since these days, computers can design things flawlessly without mathematical errors, we may be more likely to think that we will be able to make the things right away. However, in the real world, we will experience errors not revealed by the calculation. It is only humans who can cope with such unexpected errors, who can come up with idea(s) to resolve the errors based on past experiences and studies, and who can put the idea(s) into physical substance.

With the advancement of such technologies as AI and automated car driving, robots and computers are going to take on tasks and roles of humans, and the tasks and roles newly required for humans to take on will keep changing day by day. Humans cannot compete with robots and computers in carrying out the same task repeatedly and in cramming knowledge into the brain (i.e. into the database in the case of robots and computers). Instead, humans need to have creativity to come up with new idea(s) and to put the idea(s) into physical substances. The diversity or versatility of humans is a driving force to create new ideas(s) and to bring them into existence. In other words, we are able to see one thing from various perspectives and to flexibly keep up with changes in the world. As mentioned at the beginning of this column, there is not yet an established academic system defining what Origami Engineering is. People from different areas of expertise / specialty are deploying their own studies / research and cooperating with others, which is giving birth to new creations. For example, one of them has created a beverage can by obtaining ideas from the patterns observed on a collapsed cylinder and I am trying to create a vibration isolator. This difference in the ideas derived from the same phenomenon indicates that Origami Engineering, which is founded on origami art that has evolved from the trial and error of Japanese who have been trying to reproduce the form of nature with sheets of paper, is a very human-like academic discipline that will be able to fully exploit the potential of humans.

* The information contained herein is current as of August 2018.
* The contents of articles on Meiji.net are based on the personal ideas and opinions of the author and do not indicate the official opinion of Meiji University.

Do sweat- and blood- monitoring open a new window on fut ...

Learning the making of transparent conductive film for d ...

What saves us from stress is reactive oxygen species, a ...

Can people make an ideal society by learning from ants?