Your own beautiful characters can be created, while making the most of handwritten characters

While computers have drastically reduced the effort needed for people to write characters, typed characters lack personality compared to handwritten characters. Therefore, Professor Nakamura from the School of Interdisciplinary Mathematical Sciences has been conducting research on this topic with the goal of integrating the good points of handwriting with those of digital means. 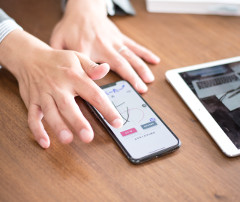 Moreover, as another application, we have realized a method for integrating handwritten characters and computer fonts by enabling computer fonts to be expressed by mathematical formula. Regarding handwritten letters, computer font, and integrated letters of handwriting and computer font, we conducted an experiment on which characters would be appropriate when writing a letter, and which characters would please the recipient when they read the letter. The result was that integrated characters which display one’s own characteristics in a beautiful manner allow people to write letter using them without hesitation. Also, they would be pleased to receive letters written with the integrated characters as well. Of course, there are people who like their handwriting and feel confident writing with it. On the other hand, there are quite a few people who lack confidence and feel ashamed to handwrite letters to their superiors and those who have helped them. Nevertheless, a letter with only computer font does not show any characteristics, and sending such a letter may even be disrespectful. In such cases, I believe that it will be extremely helpful if you have integrated handwritten and typed characters.

Reviewing value of handwriting, and the need for redefinition

Actually, there was another reason why this system for integrated characters was developed. Even though creating a document using a computer has become easy, it is not unusual to be asked for a handwritten resume. Since handwritten characters demonstrate unique characteristics and individuality in letters, you would be delighted to receive a handwritten letter. On the other hand, handwritten letters don’t demonstrate the true personality and abilities of those who write the letters. Additionally, since mistakes cannot be made on resumes, it may not be good to write a resume by hand, since there may be errors or people might misread it due to poor handwriting. However, if writing a resume by hand is “common sense,” I believe that it would be useful to make handwriting beautiful in the same manner as software by utilizing the system of average handwriting note to duplicate handwriting in the same manner as software for a drawing robot. When it becomes possible to duplicate handwriting with a drawing robot, I believe that it can lead to discussions on the nature of handwriting and what the values of handwriting are. This links to redefining the value of handwriting. As a matter of fact, it made news that starting this April, four leading credit card companies decided to halt personal authentication by handwritten signature for credit-card transactions. In other words, handwritten signatures are not appropriate as a system for proving identity. In a society where such a system is established, the “common sense” of signing when using a credit card is no longer common sense. The value of handwriting lies in other fields.

Observation and thorough consideration are the keys 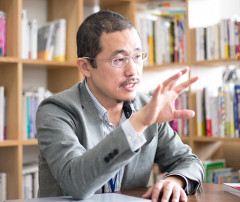 We have been carrying out researches to utilize integrated characters of handwriting and computer font in various fields. One of them is application to manga. For instance, in many cases, existing fonts are used for characters in text balloons of manga without any attempts at ingenuity. However, for manga in electronic book format, the letters can be changed in a flexible manner. Here, for example, if male readers can apply integrated characters to lines of male main characters or apply integrated characters of favorite Japanese idols to lines of female heroes, it would enhance their sense of immersion into the manga and make the content more enjoyable for them. In addition, by applying this method to movie subtitles and lyrics shown on Karaoke screens, it should enhance motivation for watching movies or singing. Moreover, many textbooks are written in a rigid font called a textbook font. Yet I am giving thought to an application, such as if one’s own integrated characters are used, textbooks would be easier to read, more accessible, and more comprehensible.

The keys to generating such an idea are observation, consideration, and accumulation of one’s own answers. For example, when people encounter things that are not easy to use or understand, they tend to dismiss them without dwelling on them, even if they feel unsatisfied or annoyed. However, that will not lead to anything. Instead of letting it go, it is important to thoroughly observe those things and the people using them and consider why they have become as they are, where their problems lie, and how those things can be improved so as to draw a self-conclusion. There are numerous examples in daily life, such as a toilet that people cannot understand how to flush, a door that does not show whether to pull or push, a sign that does not clearly specify whether it’s a men’s or women’s bathroom, and a document which is full of errors. At such times, you should track down reasons and causes for the problems. It may simply be due to slow reaction, inconvenience of installed location, cultural background, or not being well translated. If you repeatedly consider various questions and draw your own conclusion, it leads to accumulation of knowledge and experience. Moreover, when you face a problem, this accumulated knowledge and experience suddenly starts working and develops into problem-solving ability. In addition, as these accumulated learnings suddenly link to one another, new ideas will be generated. By linking these ideas with other learnings in an organic manner, they can be converted into something better. For example, the research on handwriting introduced above was developed thorough observation and thinking. This method is a way of creating ideas that can be utilized not only by researchers, but also by business persons and people working at home.