Questioning the process of discussions on the Security-related Bills

Prime Minister Shinzo Abe intervened in the personnel affairs of the Director-General of the Cabinet Legislation Bureau, something that no Prime Minister in the post-war era had ever done, carrying out the appointment in an unorthodox way. At the same time as entertaining profound misgivings about the process of discussions on the Security-related Bills that originated in this appointment and was recently submitted to the Diet, I have questions about the “motivation” of Prime Minister Abe who obstinately desires to be able to exercise the right of collective self-defense.

The Cabinet Legislation Bureau, long responsible for the government’s interpretation of the Constitution 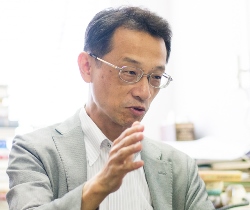 There are various opinions being expressed for and against the Security-related Bills which are currently being debated in the Diet. However, even before discussions of the content of the bills, there have been issues on the political methods employed by Prime Minister Abe in the lead-up to the submission of the bills to the Diet, issues grave enough to shake the foundations of a constitutional state based on the rule of law.

These issues occurred in August 2013, when Prime Minister Abe broke a custom to designate an outsider who shared his way of thinking to the new Director-General of the Cabinet Legislation Bureau. The Cabinet Legislation Bureau is an agency which directly assists the Cabinet on legislative matters. It examines legislative bills that are to be brought before the Cabinet and undertakes the interpretation of laws. The Cabinet has the right to appoint its Director-General. That is to say, the Prime Minister has the de facto right to make this appointment. However, all the Director-Generals in the post-war era have been promoted from within the Bureau. This institutional practice has ensured that the Cabinet Legislation Bureau gives logically consistent opinions, without being swayed by the will of the administration in power at the time. The previous Cabinets have consistently complied with these opinions, maintaining the stability of our country as a constitutional state. In other words, there was a rational reason why the previous Cabinets had not intervened in the personnel affairs of the Director-General of the Bureau, which is a legal advisor to the Cabinet.

In fact, in 1987 in the middle of the Iran-Iraq War, then Prime Minister Yasuhiro Nakasone thought about dispatching minesweepers belonging to the Maritime Self-Defense Force to the Persian Gulf, an area which was not “an actual site in which hostilities are currently taking place,” in the words of the Security-related Bills. However, Masaharu Gotoda, Chief Cabinet Secretary, pulled him up strongly based on the Cabinet Legislation Bureau’s interpretation of the Constitution, saying “Of course this is not allowed under the Constitution.” As a result, the plan for the dispatch was abandoned.

In this current case, too, the existence of a Cabinet Legislation Bureau which had not permitted changes to the interpretation of the Constitution was troublesome to Prime Minister Abe, who wants to make it possible to exercise the right of collective self-defense. That is why he plotted a “thought reform” of the Cabinet Legislation Bureau by picking an outsider who would go along with his intentions as its Director-General. Unable to resist this pressure, the Cabinet Legislation Bureau decided to change its accumulated interpretation of the Constitution. After that, Prime Minister Abe made a Cabinet decision changing the interpretation of the Constitution in July 2014, and submitted the Security-related Bills to the Diet in May 2015. Then in July, this bill was steamrollered through the Lower House special committee on the security bills, and was passed at a plenary session of the Lower House even though the opposition parties absented themselves.

I am worried about the attitude of Prime Minister Abe who, while breaking a precedent for an appointment of the Director-General of the Cabinet Legislation Bureau, pushed ahead “solemnly” with discussions of the bills regardless of the cries of many constitutional scholars that they were unconstitutional, even going so far as to jeer. This was apparent in the remarks by Abe’s special adviser that “What we have to think about is whether the measures are necessary to protect Japan. Legal stability has nothing to do with it”: they are overconfident that things will go their way, even though they make light of the Constitution and institutional practice. It is no overstatement to say that the reckless behavior of the Abe administration aims to undermine the basis of our constitutional state. 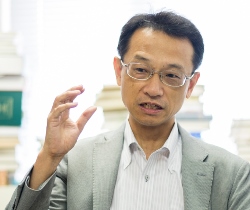 Why, in spite of this, does Prime Minister Abe want to enable the exercise of the right of collective self-defense? Even listening to the answers given in the Diet by Prime Minister Abe and Cabinet ministers, their explanations of the reasons are unsatisfactory.

Even so, the Abe administration has made a Cabinet decision to enable the exercise of such a right, albeit limited, and is trying to make laws based on this decision. Since this right is “limited,” it cannot be exercised without certain conditions being met. The first of these is “an armed attack against a foreign country resulting in threatening Japan’s survival.” This denotes “when an armed attack against a foreign country that is in a close relationship with Japan occurs and as a result threatens Japan’s survival and poses a danger to fundamentally overturn people’s right to life, liberty and pursuit of happiness.” But is it really possible that Japan could be thrown into such a serious situation simply by an attack against a foreign country? I think that trying to explain the logical contradiction of“the exercise of the right of collective self-defense to protect our nation” is unreasonable.

In other words, despite the peculiar degree of fixation displayed by Prime Minister Abe, it is almost impossible to think of any situations in which the right of collective self-defense could be exercised as long as we keep to the letter of this first condition. Rather, the aim is to “have a small baby and raise him to grow big.” Probably he hopes to remove the restrictions on the exercise of the right of collective self-defense little by little, until in the end he is able to exercise this right to its full capacity.

Since the end of WW2, Japan has not dispatched its Self-Defense Forces to foreign territories with the aim of exercising military force. Nevertheless, this does not mean that the world has given Japan the cold shoulder. Instead, Japan has developed its brand as a peace-loving nation. There are a lot of international contributions, and military contributions only constitute small parts of these. It is widely known that Japan has made various international contributions in non-military fields. Prime Minister Abe has demanded that the opposition not merely oppose the Security-related Bills, but submit a counterproposal which protects “people’s right to life, liberty and pursuit of happiness.” Respecting our legal stability as a constitutional state, and taking pride in our 70-year post-war record as a peace-loving nation – surely these are the very essence of such a counterproposal.