In truth, everyone knows that it’s not fun if one person always wins a game

Shinichi Nakazawa, Director of “Institut pour la Science Sauvage” of Meiji University, points out that the world today has started to be gamified from people's daily lives to political situations of various countries. To clarify its meaning, he has established “Game Studies.” 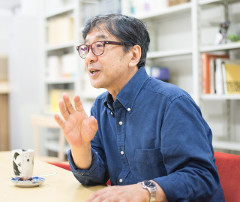 In recent years, Game Theory is often used to solve international politics and economic strategies. However, the Game Studies that I have started is something different. Johan Huizinga, a Dutch historian shows in his “Homo Ludens” that human culture originally arose in various forms of play. For example, the fun of exchanging goods turns into practical and economic behavior, which will eventually become economic activity. People who are good at drawing or music will come to compete with one another, which will eventually evolve into art. Ruling a country or international politics is also built on practical and competitive elements of games. Play and games are indeed the root of various types of human activities and the essence of culture. I have come to think then that considering a variety of activities of modern society from the perspective of games is the most fundamental learning that deals with humankind.

Conversely, it is possible to capture the nature of communities that have produced games from the games that are being played now. For example, when computer games spread throughout the world, game software that Japanese produced stormed the world. One of the reasons for this is that in addition to the delicacy of Japanese games, they contained a system of “not creating an absolute winner,” which is in the principle of games that humankind has been playing from ancient times. The system which had always underlain every community has been nurtured strongly in Japanese society in an unconscious manner and has deeply influenced Japanese culture. This system is reflected in the form of computer games and people around the world also find it agreeable. In fact, humankind’s game principle of “not creating an absolute winner” has been poured into Japanese comic books and anime as well. This is the nature of what is touted as “cool Japan” these days. However, despite cool Japan being highly touted, nobody really knows what is cool. As a result, only a superficial part of Japanese culture is picked up in many cases. Currently, in the field of computer games that attract worldwide attention, Japanese game creators are earnestly working on grasping once again the essence of Japanese culture which Japanese people have nurtured unconsciously. As it happens, this work is also involved with Game Studies.

Games and daily life are beginning to overlap

In 1938, when Huizinga wrote “Homo Ludens,” he said that play is distinct from daily life. The reason is that games are fun because they are simple but the real world is too complicated to enjoy. However, in recent years, games and daily life started to get closer or rather started to overlap. For instance, modern economic activities depend on monetary manipulation, to which computers have been introduced and they are, you might say, completely gamified. Furthermore, the fact that people’s way of thinking has become simpler due to digitalization of media including communication tools has contributed to the gamification of the real world.

These phenomena are naturally due to the development of information technology but in the background lies the surplus population. In Japan and some developed nations, declining birthrate and shrinking population are issues but worldwide, population has been increasing, with its number exceeding 7 billion. In China, the most populous country in the world, the population is about 1.4 billion. To control such a vast country with such a lot of population based on the rules the central government has set, simplifying people’s daily lives is an effective method and digital media, the tool for this method, is very effective.

In fact, a system in which players of a game must play in accordance with set rules and one who violates the rules will be excluded is, we might say, a negative aspect of the game. Moreover, the simplification of a society with the purpose of unified management will lead to the gamification of daily life as well as thorough elimination of people who do not follow the rules. In Europe, there is a case in which an ethnic minority group becomes independent to form a country. In short, you cut off people with different rules and acknowledge them. However, the Chinese rules that have been developed in its long history require local and surrounding peoples to become the same players alike under the rules set by the central government. Population increase seems to have accelerated strict observance of the rules. However, similar kinds of things are unexpectedly happening in Japan. Here, although there is no increase in population, people’s thinking has become simplified with the advancement of digital media. Because of this, the “complicated” process of considering different opinions from others or views of minority groups has become troublesome. In consequence, the majority of people increasingly tend to feel a sense of relief when unilaterally eliminating different things and following agreed-upon rules. This tendency is found in the US, too. For example, the US, which has chosen Mr. Trump as their president who asserts openly that intellectual complicated things are not necessary and tweets with plain and simple junior-high-school-level sentences, after former President Obama, who was trained to construct beautiful and complicated sentences with classical rhetoric, has made international politics gamified under very simple thinking and has become just like a child who aims to be the sole winner.

The sole winner is not created in the game principle 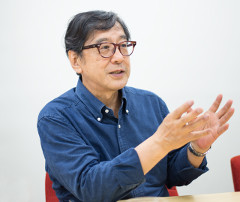 Games have rules and determine winners and losers. In that sense, the US attitude of trying to win both economically and politically is not something to be criticized. On the other hand, humankind has developed in its long history a system that prevents the creation of an absolute or sole winner. As previously mentioned, this system has been strongly developed in Japanese society but it also lies at the root of many communities in the world. For example, different Indian tribes in the US formed coalition troops when white people invaded their land and they drove cavalries into near annihilation. However, when there was a talk about electing a king (sole winner) who would lead their tribes, the coalition troops broke apart and returned to their own territories. Being the sole winner is to keep winning against people who have different rules and incorporate them into your rule. Games that humankind has been playing have the principle in which the game ends when a winner and a loser are decided and if you want to play it again, you start from scratch. Naturally, no absolute winner is created and no one remains a loser forever. This is the positive aspect of the games that humankind has produced.

Ultimate goal of humankind is to have fun

Why humankind has started games. It is because games bring us pleasure, joy and comfort. As I have mentioned, politics, economy and culture developed after having originated in games. If the origin of various human activities is in games, we can say that we seek comfort above anything else and it is the ultimate purpose. The reason we seek peace is because it is comfortable. However, things that have developed for that purpose, for example the economy, generate disparity. It is, of course, not comfortable for the poor. However, those who have become rich in hopes of getting comfort have started to realize that being rich alone is not fun and does not lead to fulfillment. Money becomes the objective for them and they don’t know what fun is any longer. Winning too much is not good in games after all. Humankind had a wise system of not allowing the sole winner and preventing the world from losing its balance. To have that system, what methods are required for games? That is a very important question. We have to understand again the system that humankind has unconsciously implemented. I think the mission of Game Studies is concentrated on this point.

* The information contained herein is current as of  September 2018.
* The contents of articles on Meiji.net are based on the personal ideas and opinions of the author and do not indicate the official opinion of Meiji University.