Water has infinite possibilities from a scientific viewpoint, although it is known as a familiar substance that is abundant on the earth, in space, in vivo, and so on. Our University has a laboratory that advances studies on the PHYSICAL CHEMISTRY of WATER, whose subject is various substances related to water.

Key to the material evolutions in space [Amorphous ice] 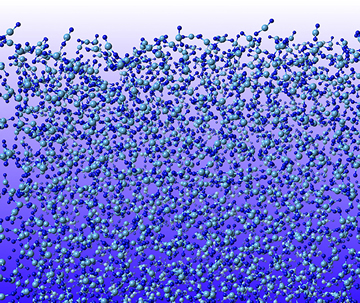 Materials can be classified into the three states of solid, liquid, and gas. Water in these three states are called ice, water, and water vapor, respectively. States of materials depend on temperature and pressure. Furthermore, in the case of water, structure and properties change with formation process, thermal history, and coexisting materials. The transition mechanisms and properties do not yet fully understand.

Water is attracting attention as a key material for chemical evolution in space. The investigation of the structure and properties of water in various conditions is essential to understand the mechanisms of chemical evolution.

Ordinary ice, which we can make in a freezer, is a crystal with a hexagonal arrangement of water molecules. The natural ice and snow, which are formed on the earth, also have the same crystallographic structure. On the other hand, amorphous ice has a non-crystalline state without long-rang order of molecular arrangement.

Amorphous ice is formed by vapor deposition of water at temperatures below ~100 K, like interstellar molecular clouds.

Amorphous ice formed in interstellar molecular clouds includes various elements such as carbon, nitrogen, oxygen, hydrogen, and so on. These atoms undergo chemical evolutions through various processes. The synthesized organic compounds have been proposed as an origin of life.

The mineral grains covered with amorphous ice grow through various processes such as aggregation and collision to be a heavenly body like earth.

Amorphous ice can be formed in the laboratory, although it is difficult to collect a natural sample in space and bring it to the earth.

Based on the observation data of amorphous ice in space and the experimental data of artificial amorphous ice, we study the structure and properties of amorphous ice and coexisting minerals. The results may be a key to understand the origin of life and the forming process of the earth.

Key to the environment and energy of the earth [Clathrate hydrate]

Methane clathrate hydrate, which has been attracting attention as a new energy resource of next-generations, is a type of ice crystal.

The Antarctic ice sheet is made of snow that has accumulated in the past. The deeper the point from the surface, the further back in the past it was formed, and it is known that it goes back as far as approximately 700,000 years ago at the deepest point. Air hydrate in the ice sheet is a valuable source of information on the paleo-atmospheric environment of the earth.

Clathrate hydrates exist also on the seabed. Clathrate hydrate that includes methane generated from organic compounds such as plants and bodies of dead organisms accumulated in the mud of the seabed is called methane hydrate.

Large amounts of methane hydrate has been found in the Japan sea and is expected to be a new energy resource for Japan. The investigation of the properties and formation process of clathrate hydrates may lead to the practical use of methane hydrate.

For instance, in the past, a plan had been made to remove methane from clathrate hydrates on the seabed and instead insert carbon dioxide to store it there.

There is also a material called hydrogel, which is the side that includes water, against clathrate hydrate which is the side where water includes something. Hydrogel can hold a large amount of water in a three-dimensional network structure made of polymers. Due to the swelling properties of the three-dimensional network, hydrogels are widely used biomaterials, medicinal products, and so on.

The water coexisting with polymer has unique properties different from those of ordinary water. It is essential to understand their structure and properties, because many polymer materials are used in wetting environments.

Speaking of water in general, three states: ice, water, and water vapor come to mind. The changes in these three states are often seen in daily life. Because water is the most familiar substance to us, it may seem that we already know everything about it. However, if you shift your perspective on water, you can see that there are different aspects that you have never seen.

This is not limited to water, so what we think is normal is only one aspect. A new aspect can be seen by having new ideas and perspectives.

Such ideas and shifts in perspective are important not only for research but also for daily life.

For example, if you have something that seems not to go well, you may merely be unaware that it is going well (or will go well from now on). If you shift your perspective, you may have an unexpectedly different view.

* The information contained herein is current as of October 2021.
* The contents of articles on Meiji.net are based on the personal ideas and opinions of the author and do not indicate the official opinion of Meiji University.
* I work to achieve SDGs related to the educational and research themes that I am currently engaged in.