Books sell better when the bookstore sets the price!?

The publishing market in Japan has been shrinking continuously since the latter half of the 1990s, leading to what has been called a publishing recession. Among the reasons given for this are a shift away from reading, the emergence of e-books, and the lending of books by libraries; but are these the real reasons? Some people have pointed out that the problems lie rather in systems and customs of the publishing industry, such as the resale price maintenance system. 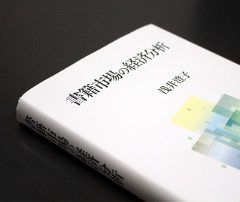 Japan’s publishing market continues to decline from year to year. Sales of printed publications peaked in 1996, and have fallen to half of this peak volume in recent years.

The publishing industries in America and European countries, on the other hand, have been undergoing a steady transition from the 1990s onwards. Although we have seen a contraction recently, the decline is not as severe as that in Japan.

The first difference between the Japanese publishing industry and those in other countries which can be cited is the resale price maintenance system.

In Japan, the price of a book is printed on its cover; but prices are never printed directly onto everyday items sold in supermarkets, for example. This is because it is the supermarket which decides the resale price. However, since the publishing company sets the price in the case of books, the publisher can print this price onto the book and sell it.

In other words, the prices of books are decided by the publisher, and bookstores cannot change these prices. This is resale price maintenance; but taking away the right of retailers to set their own prices is prohibited under the Act on Prohibition of Private Monopolization and Maintenance of Fair Trade. However, exceptional measures permit resale price maintenance for books, newspapers, music CDs, and some other items.

In Japan, this was stipulated clearly in legislation after the War, but was already an existing practice in the publishing industry.

It is said that the reason for allowing resale price maintenance to be applied to literary materials was the idea that it is our culture to have a diversity of publications, and that selling these at an identical price, without any reductions, aims to maintain cultural standards.

It is also said to be to prevent bookstores from bankruptcy due to price wars. In an era without online shopping or e-books, the disappearance of nearby bookstores made it hard to buy books.

The resale price maintenance system was put into statutory form because of such intentions, but whether or not it produces results in line with the intentions has almost never been verified here in Japan. There are examples of the application of this system not only in Japan but around the world. However, compared with Japan, the system is operated more leniently, and there are some countries which have abolished the system.

In America, there is no history of using a resale price maintenance system. In the UK, the system was abolished in the 1990s, and bookstores were allowed to set their own prices. At this point, since books with no price restrictions are entering the country from America, another English-speaking country, it can be considered unrealistic to allow resale price maintenance only for domestic UK publishers.

In countries such as Germany and France, meanwhile, resale price maintenance systems apply, but there is a time limit on price restrictions imposed by publishers.

This is known in Japan as time-limited resale. Overseas bookstores become able to change a book’s price after about six months to two years from the start of sales.

Bookstores in the UK, where the resale price maintenance system was abolished, or in Germany or France, where the system is applied more leniently, have not in fact seen a more rapid decline in numbers than those in Japan.

Rather, as discussed above, the markets in each country underwent a steady transition even after Japan’s publishing market began to decline in the 1990s.

Why, then, does Japan’s publishing market continue to contract?

The main factors behind the contraction of the publishing market

A move away from reading among the younger generation has been adduced as a factor in the contraction of the publishing market, but there are some students who like reading books. Moreover, this is surely not an issue which is unique to Japan.

Since the 1990s, Internet usage has spread rapidly, and methods of gathering information have broadened and are no longer limited to books, newspapers, and magazines. To put it the other way round, we can say that there is no longer any need to stick to paper medium publications alone.

Digital resources are more suitable for items such as encyclopedias. Digital versions do not take up space on bookshelves, and searches are simple.

On the other hand, some people find that novels are easier to read on paper. In fact, comics account for most of the market in e-books.

In other words, users turn to paper and electronic publications for different purposes, so publishers should do the same.

There is also the argument that books are no longer selling because people are borrowing books from libraries, but my analysis has shown that the influence of this factor is extremely limited.

To begin with, the role of libraries is not simply lending books, but everything related to the promulgation of culture. Libraries support us in developing a habit of familiarity with books.

In my opinion, before coming up with external factors for the publishing recession, there is room for Japan’s publishing companies to make some innovations of their own.

Some hints can perhaps be found by looking at publishing industries abroad.

In publishing industries in countries where the resale price maintenance system has been abolished or operates more leniently, economic principles are at work in the setting of prices.

For example, sales of most new books drop almost to zero around half a year after they go on sale, so lowering a book’s price at that point might increase sales.

On the other hand, bookstores in Japan cannot set the prices of books, but they can return unsold books to the publisher. At present, one third of published books are returned to the publisher. Under such a system, there is no room for economic principles to operate either at the publishing company or at the bookstore.

The formula used by publishers to set the price also differs from that used in the West. In the West, novels which are popular and are expected to sell well are priced extremely cheaply. This is to make them affordable, so that they will sell in large numbers.

On the other hand, high prices are set for academic books in the West. This is because such books will be bought by scholars and libraries: only a limited number of copies will be sold, but buyers are prepared to pay higher prices.

By setting prices which reflect these economic principles, Western publishers can be more certain of making a profit.

Japanese publishers, though, translate English-language academic books which are sold in the West for the equivalent of around 15,000 yen and sell the translations for about 5,000 yen. This could be seen as scrupulous, but it could equally be seen as needlessly giving up profits.

Since falling into what has been called a publishing recession, Japanese publishers have also increased the number of titles published in order to make up for the reduction in income. In order to do so, they have necessarily had to reduce the time spent on planning and editing each one.

As a result, many books with similar content are published, and so we have fallen into the vicious cycle of declining sales for each title, even though the number of new publications is increasing.

If one of the main factors behind this situation is a weak sense of economic principles among Japan’s publishers, with the resale price maintenance system acting to fetter change, I believe that we need to look to overseas examples for reference.

I believe that there are many business people who have to read documents, materials, and books related to their work every day; but if such people read a novel from a completely different genre to their work during their commute, for example, they often find that they can switch into another mode inside their heads and enjoy a change of pace.

I hope that Japan’s publishers will not cling to their systems or customs, but will instead rethink this situation and come up with new ideas to meet the needs of the current times.